Benson, Arizona
After leaving New Mexico (Wednesday, 2/19) we drove about 200 miles west on Interstate 10 to our next park, Saguaro Escapee Co-op Park near the town of Benson, AZ.   We joined Escapees before starting our travels, they have an excellent forum on their web site and we've gotten lots of good information from them.  Since we are Escapees we can stay at any of their co-op parks for a very reasonable price.  This park even has a special going on for people who've never stayed here before, one week for $50.00 plus electricity.  We've really lucked out on camping fees in February!  We will be here until March 1st and then head up to Mesa - YAY!

The sites here are huge, many have "casita's" plus their rigs on them.  From what I understand the casita cannot be more than 288 S.F. and any rig on the site must be  self-contained.  There are many people who live here year round (I don't know how they stand it in the summer) and the extra room in the casita helps.
One of the benefits of private parks is they usually have a very nice book and video library and decent wi-fi - that's all it takes to make us happy (although the wi-fi is a wee bit slow).

On Thursday (2/20) we drove into Tombstone.  Tombstone is very touristy and we just walked around a bit before heading home.  Lots of stores with old time western wear and other kitschy stuff. On Friday, we drove into Tucson to find an Apple store to take care of a minor problem with my Iphone and then we went to our first Arizona casino.  We walked in and signed up for our player's cards and they gave us free buffet coupons and 10.00 credit for the machines and that made us winners (at least in my eyes).

We drove into the town of Bisbee on Saturday.  Bisbee was established in 1880 and at one time was the largest town between San Francisco and St. Louis.  It was a mining town with as many as 5000 miners working in the local mines.  The mine closed in the 1970's.  Tours are offered three times a day down into the mine but you need reservations and we hadn't done that so we'll have to go back during the week, it looked pretty interesting.  The town reminded me of Galena, IL except with more of a hippie vibe.  It had lots of antique stores and lots of artists.  It was fun browsing through the different stores and I even bought some cool magnets from the metalware studio/store.
There is a jam session on Sundays from 3:00 - 5:00 at the RV park for any musicians interested.  Marty joined in and I stayed to listen.  Most of the music was old time country and western with some country gospel thrown it but there was some stuff I recognized.  Marty played "City of New Orleans", one of the highlights of the show.  Most of the musicians were very good and the jam session went well considering most of them hadn't played together before.  It was a nice way to spend a Sunday afternoon (and I got to work on the computer while listening).

Monday morning we got up nice and early in order to be at the Sonoran Desert Museum by 10:00 for their Raptor Free Flight Show.  This museum is 62 miles west of us on the west side of Tucson.   I heard about the show from one of the RV podcasts I follow and they raved about the photo opportunites during the show and also from just walking the area.    Here is the definition for raptors:


A raptor is a bird of prey. The word raptor comes from the Latin root that means
"to seize and carry away", and is assigned to any bird that kills with its feet.
Hawks, eagles, falcons, osprey, and owls are all raptors.
We were warned to keep our hands down during the show because the birds would be swooping right over our heads.  Marty, being so tall, felt a hawk touch his hair - freaky!  He took some awesome pictures so it was worth it. 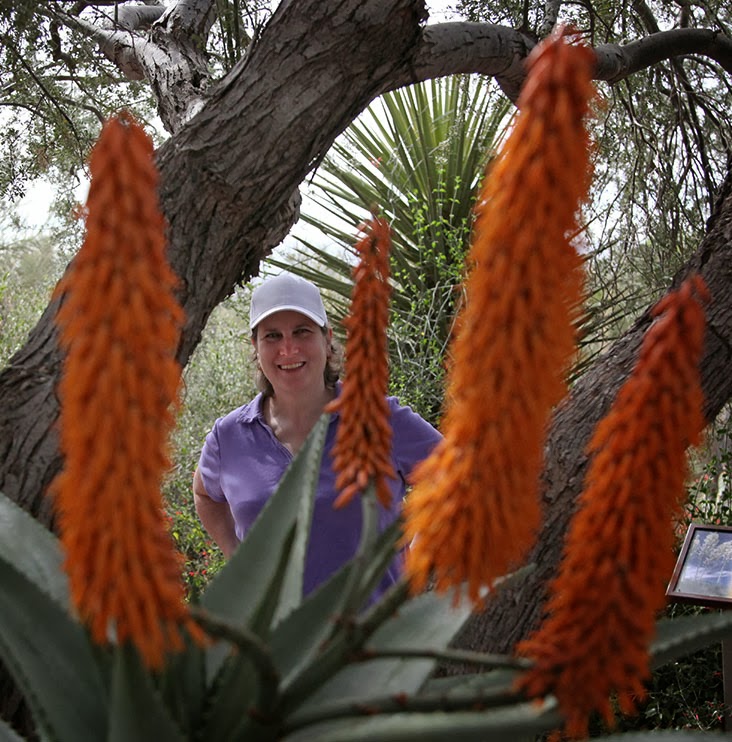 When we left the raptor area we took a walk on the Desert Loop Trail and saw our first javelina - they are ugly, pig-looking animals (but not related to pigs).  We've seen signs warning of them in New Mexico and here in Arizona but hadn't seen one.  Lucky for us this one was in an enclosed viewing area.  I wouldn't want to meet one walking in the desert.

We also visited the Walk-in-Aviary and the Hummingbird Aviary.  Hummingbirds are fun to watch and the photographers were out in force to capture a picture.

When we left the Sonora Desert Museum we continued a few miles down the road to Saguaro National Park.  We picked up an annual National Park Pass ($80.00) so now we can enter any U.S. National Park for free.  We're hoping we will get our money's worth, the pass is good until February 28, 2015.   We plan on going to the Grand Canyon at the end of March so we'll be using it then.

Benson has a museum which we decided to visit on Thursday.  It has lots of local artifacts donated by city residents and there is also a quilt/crafting room with items for sale.  Outside is the old horse-drawn school bus used to take students to school.  Imagine going to school in that!

After our quick tour of the museum we decided to check out the "town" of Gammon's Gulch.  This town is actually 10 acres of land that is about 10 miles north of Benson.  Jay Gammon bought the land back in the early 70's and has worked ever since on building an "authentic" old west town.  It's pretty amazing!

Jay's father was John Wayne's security whenever he filmed in Arizona and Jay got to be an extra in some of Wayne's films.  He has autographed photos of many celebrities hanging in the town's saloon.

Gammon's Gulch has been used as background for many movies and tv shows.  They also host private parties and you can even get married in the town chapel.

When we got here (at High Noon) the town was deserted except for one pickup parked outside the hotel.  We walked down the dusty, sandy road and met Jay Gammon coming out of the hotel.  It turns out that he and his wife, Joanne, live in the hotel.  Jay is quite a character and a very charming man.  He loves his antiques and knows the history of every item in his town.  He is very proud of what he has accomplished and offers personal tours.  If you don't like the tour you pay nothing and if you like it he asks for $7.00 per person to pay the electricity.  We gave him $20.00 and felt it was a bargain.

That's it from Benson, Arizona now it's on to Mesa for the whole month of March.  Go Cubs!!

During our travels we've primarily stayed at State Parks, the sites seem larger and more spread out and we enjoy the natural settings.  When we got into the truck we had every intention of staying at City of Rocks State Park near Deming, New Mexico.   However, while doing some research on New Mexico parks, I found Hidden Valley Ranch, a private RV park.  The reviews were excellent and the price was less expensive than the nearby state park and we get wi-fi, use of the laundry facilities and full hook-ups.  It was an easy decision to switch our plans.

This is a working ranch with, I believe, 17,000 acres. They raise cattle and also have horses.  There
are many ATV trails and lots of hiking.   Many of the people here stay on a permanent basis and many others  stay each winter.  Everyone has been incredibly friendly and they have a pot-luck every Friday which we attended.  They also have a wonderful library, books and dvd's and, speaking of dvd's, we've already watched the first season of Breaking Bad - only 4 seasons more to go, what a good show!

On Friday morning we took a drive about 25 miles north to visit the City of Rocks State Park.  While there we purchased an annual pass so we can now go in to any New Mexico Park for free for one year.   I wonder how many State's annual passes we're going to end up with? 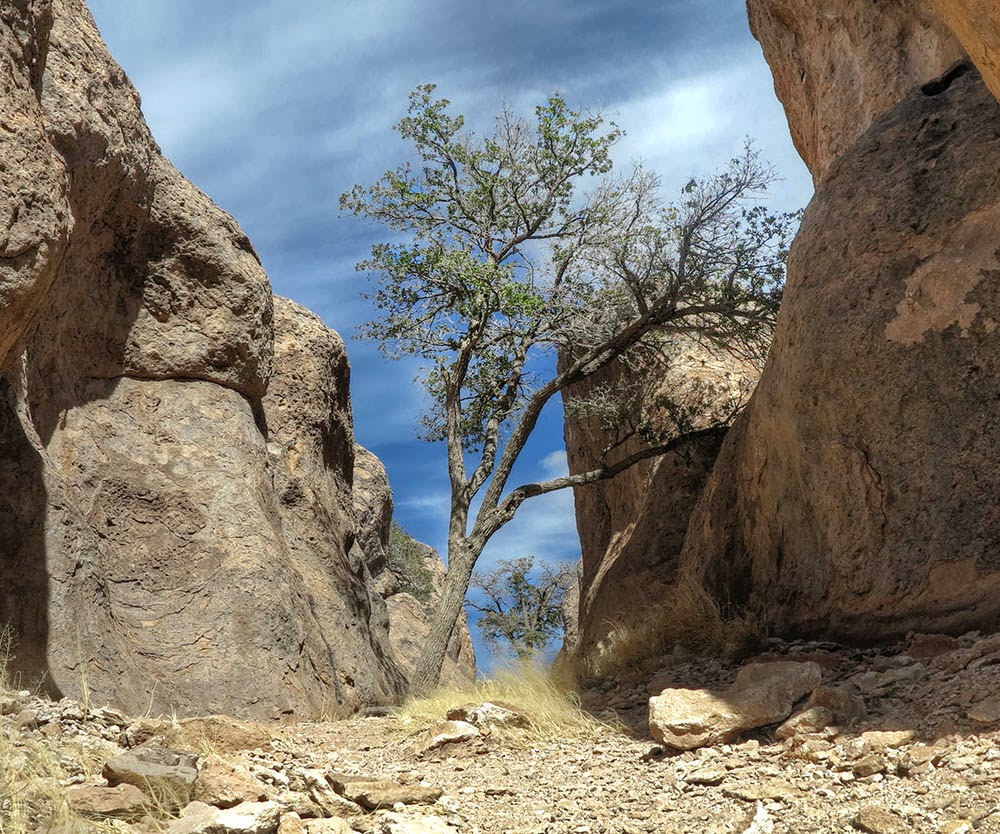 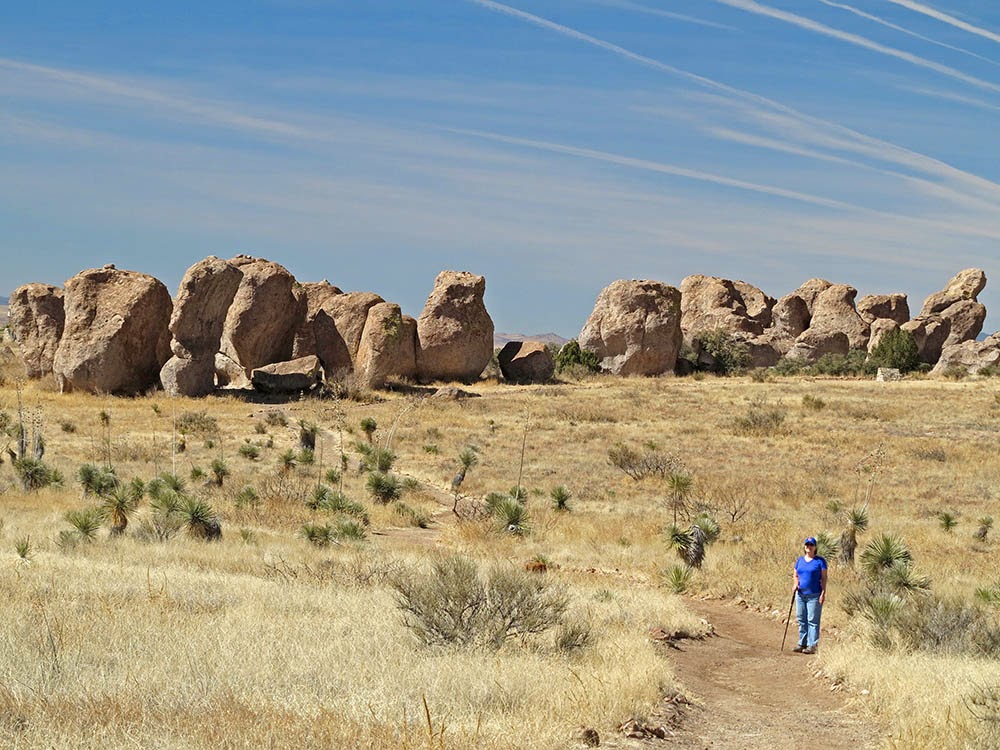 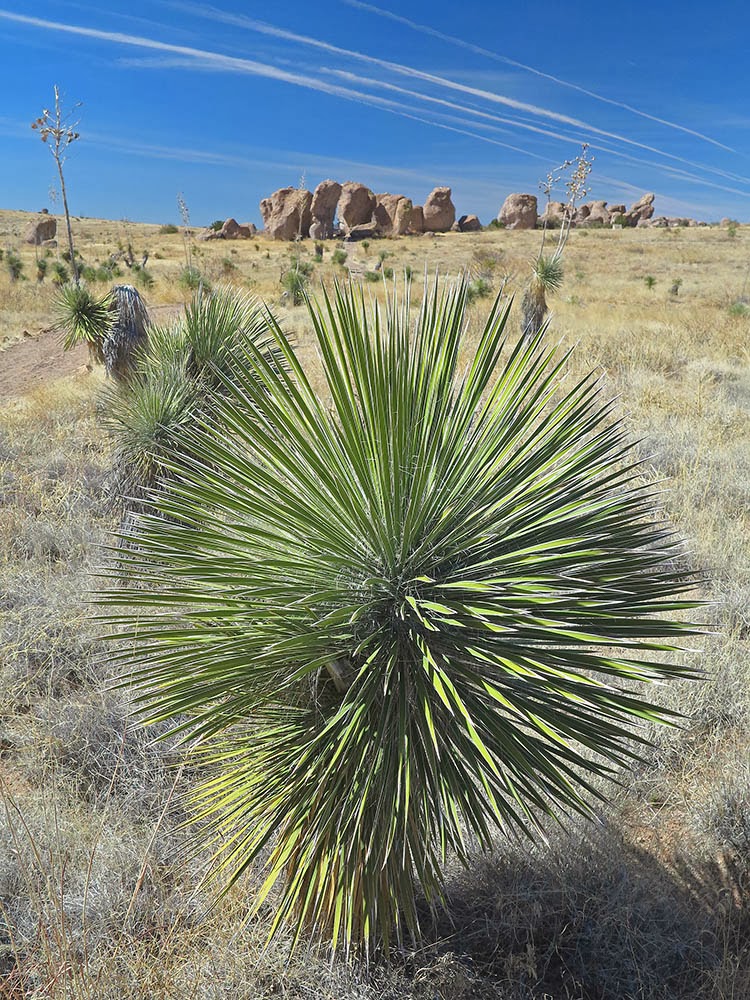 On Saturday we drove north to Silver City and walked around the historic downtown area for a little while.  I checked out antique shops and thrift stores but living in a RV has quenched my desire for "stuff".  When something comes in to the rig something else should leave (not always the way it happens but I try).

After Silver City we drove straight south for about 65 miles to Palomas, Mexico for lunch.   The town of Palomas doesn't really have much to recommend it, we just did it because we could.  The margaritas were good and so was our lunch. 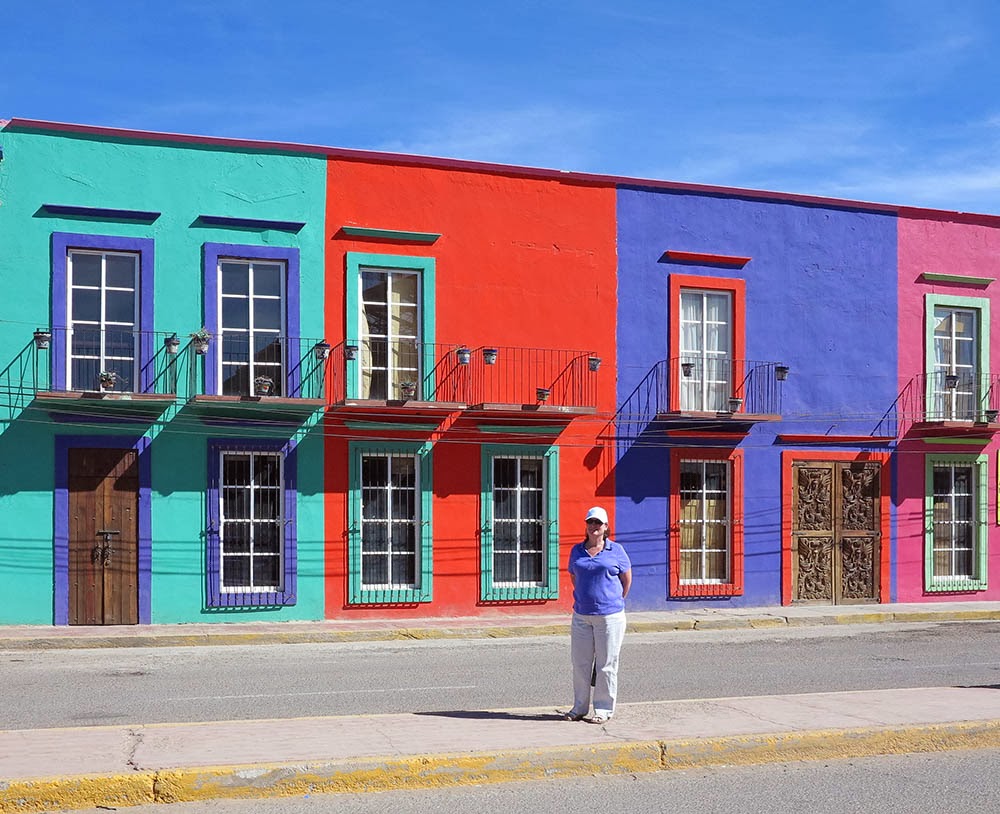 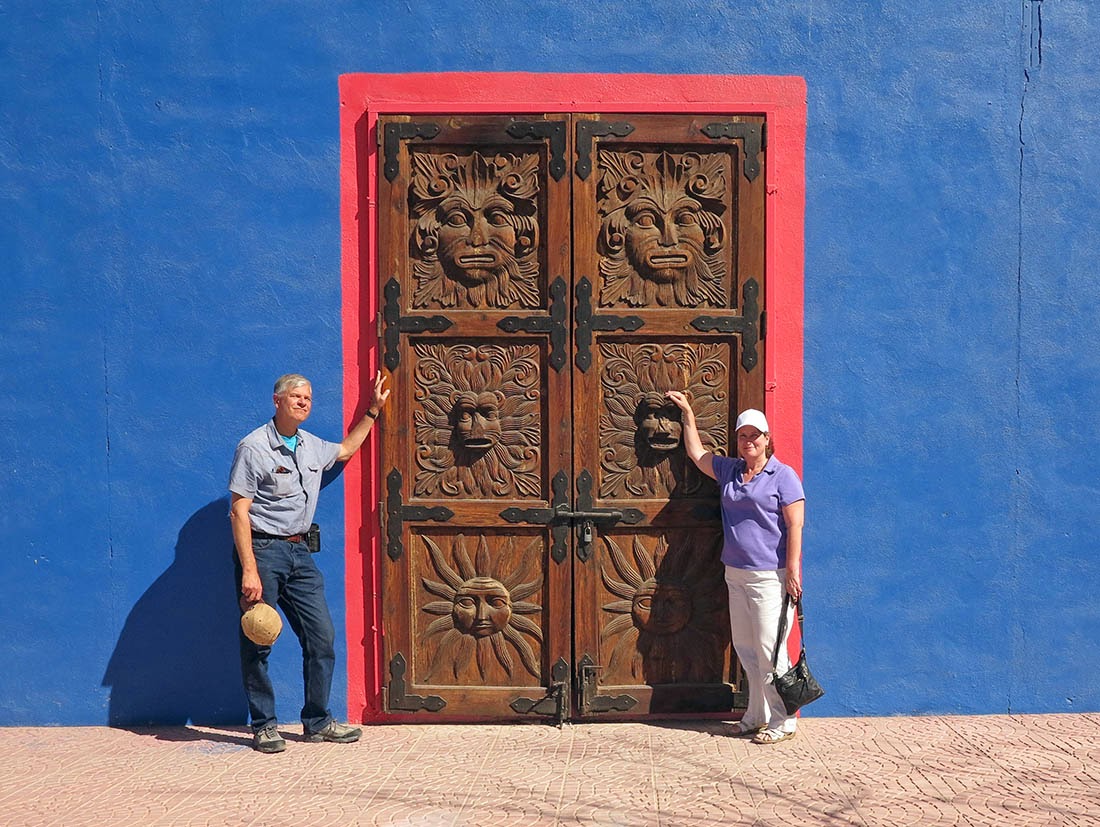 On Sunday morning we decided to do a little exploring around the campground.  We climbed a large, very rocky hill and took a picture of the campground. 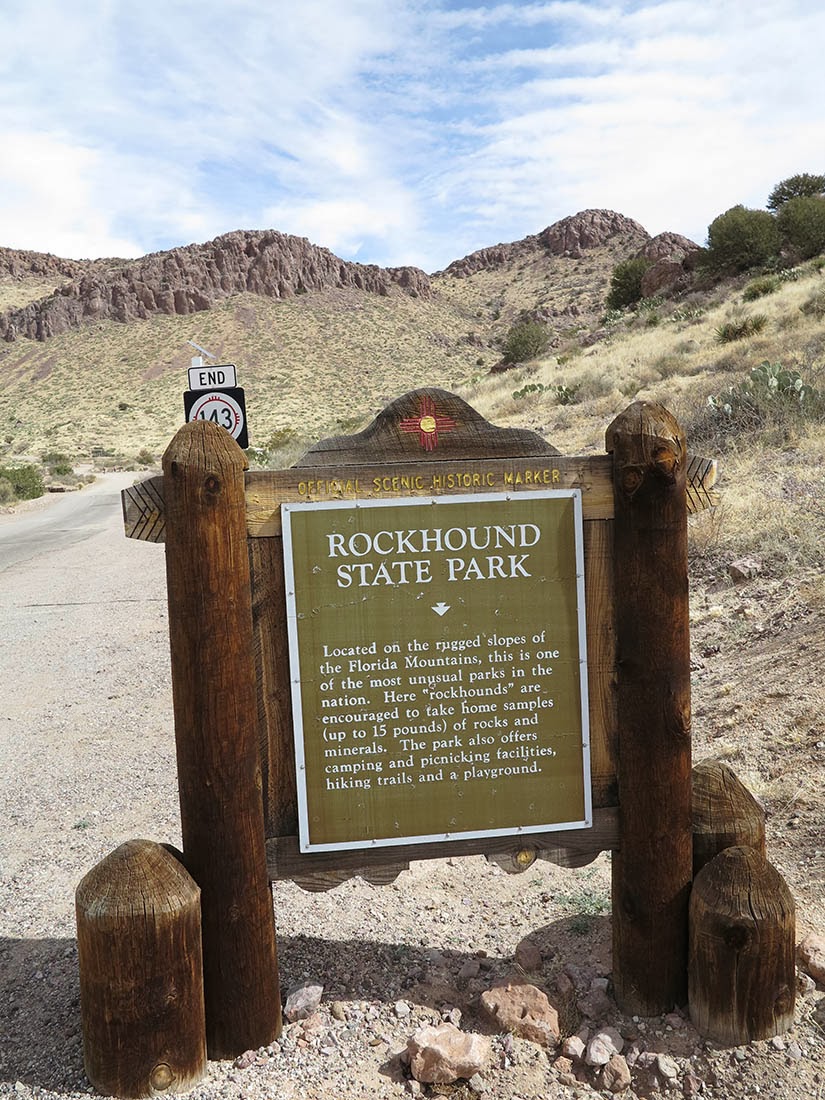 Monday morning we took a drive over to Rock Hound State Park.  This park is a rock collector's paradise, you are allowed to take out 15 pounds of rock and it's possible to find agates and quartz crystals.   We did not do any rock collecting (we have plenty of other hobbies and they weigh too much and my middle name is not Lucy).


Tuesday night we paid our final visit to City of Rocks State Park for some sunset photos - this park is even more beautiful at sunset.  I climbed a few rocks following Marty around but then I stopped to do a little "face-time" with my brother, Tom and when I was done with that Marty was nowhere to be seen.  So I went back to the car and waited - thank goodness I had my Kindle.  Unfortunately the book I was reading was a true story about two girls in New Mexico who were kidnapped and left for dead by a psycho killer.  I'm reading my book and the skies are getting darker and darker and owls are  hooting and still no Marty.  I heard a noise and saw a flashlight and got very nervous so I turned off the Kindle so whoever it was wouldn't see the light and then I tried very hard to see if I could make out who it was.  They were walking by the road and then made a turn into the campsite we were parked in.  He walked past the front of the car and disappeared into the rocks.  I'm freaking out a little bit by now and have all the doors locked and all electronic devices off.   About 5 minutes later I see someone again by the road but this time it was Marty and I guess the previous time it was Marty too.  No more creepy psycho killer books for me for awhile (at least not when I'm alone in a car in the dark!).  These pictures were definitely worth the trip (and the scare). 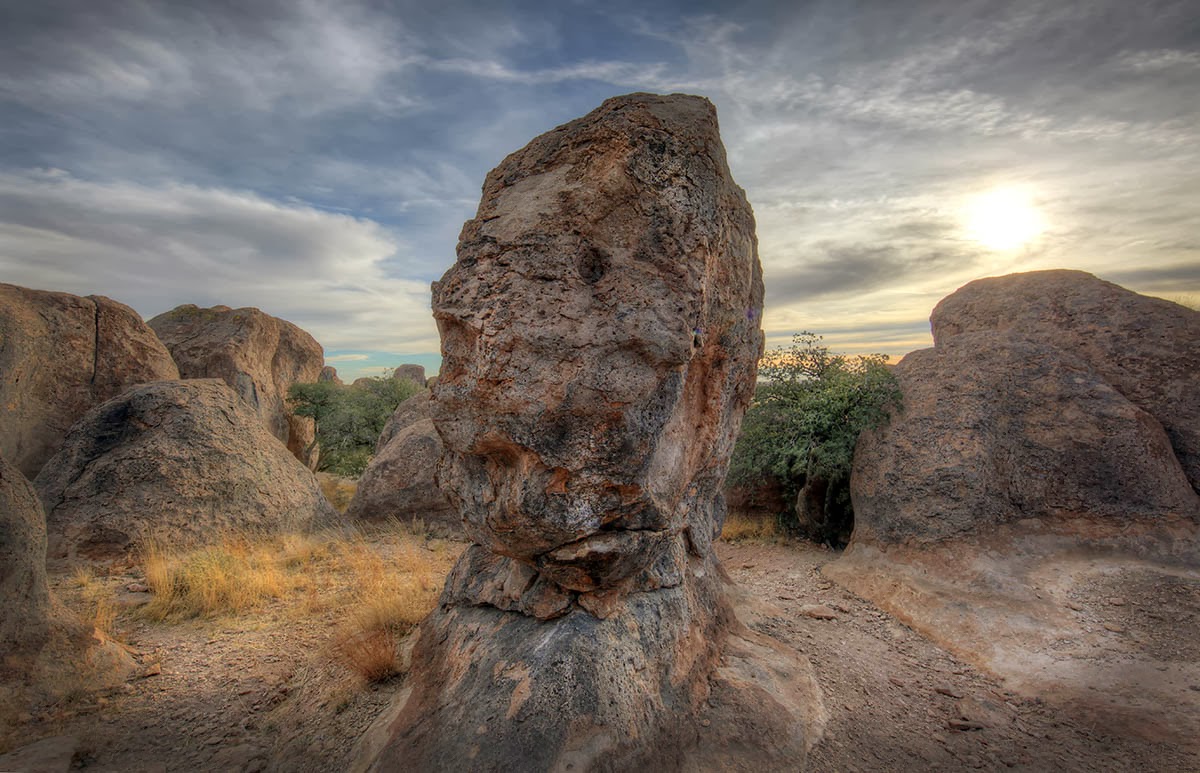 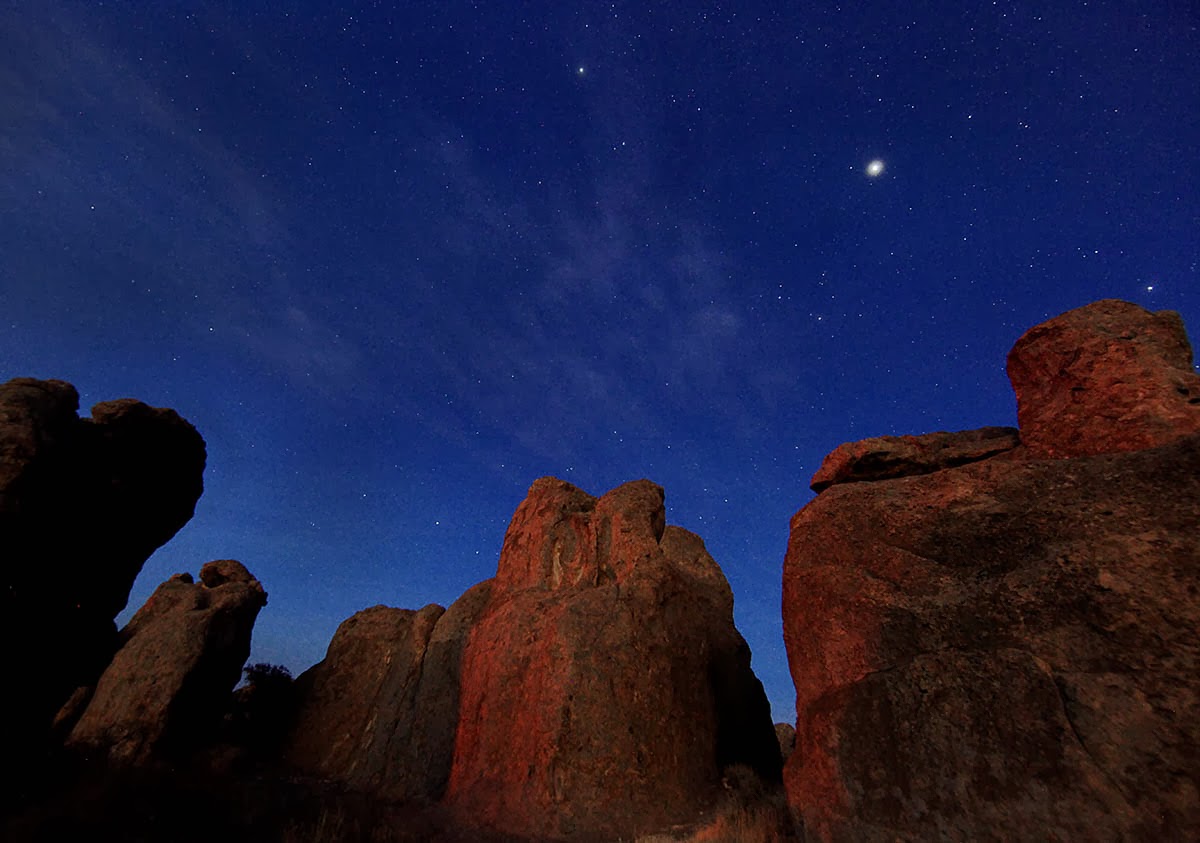 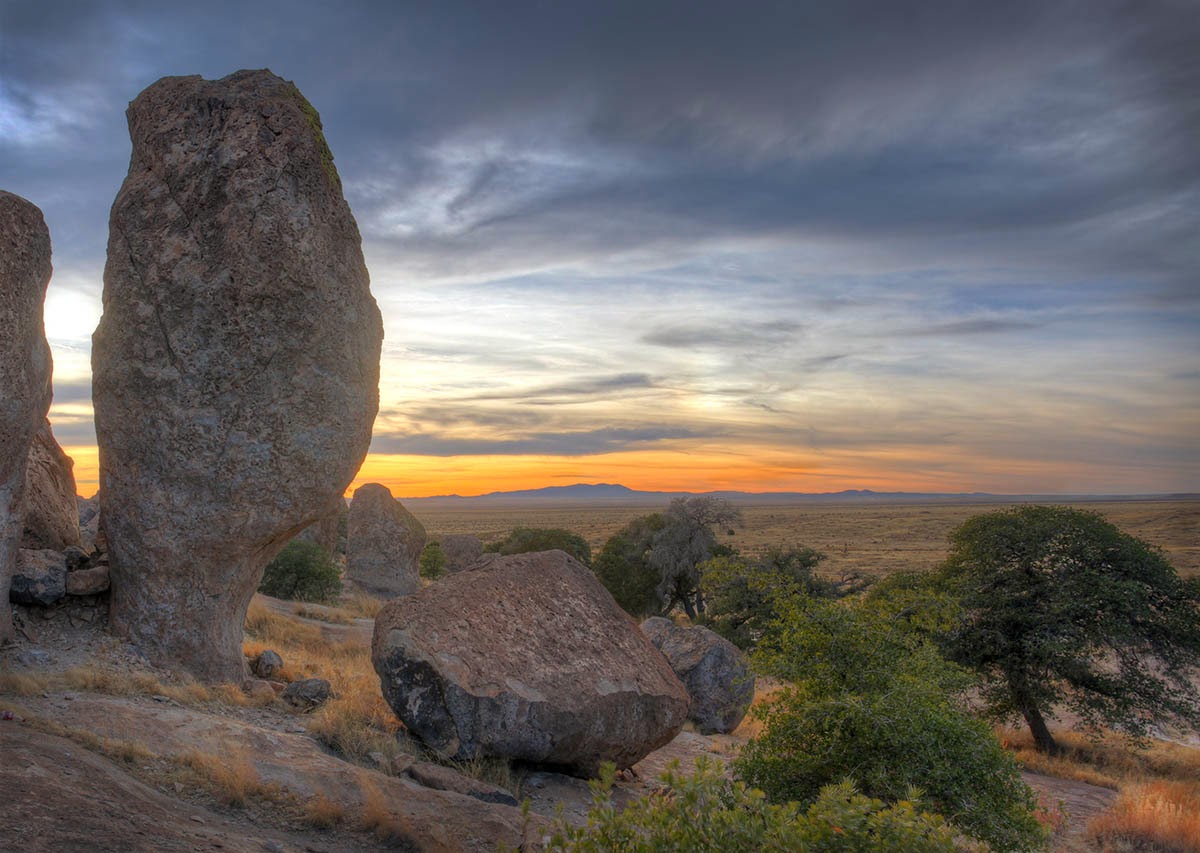 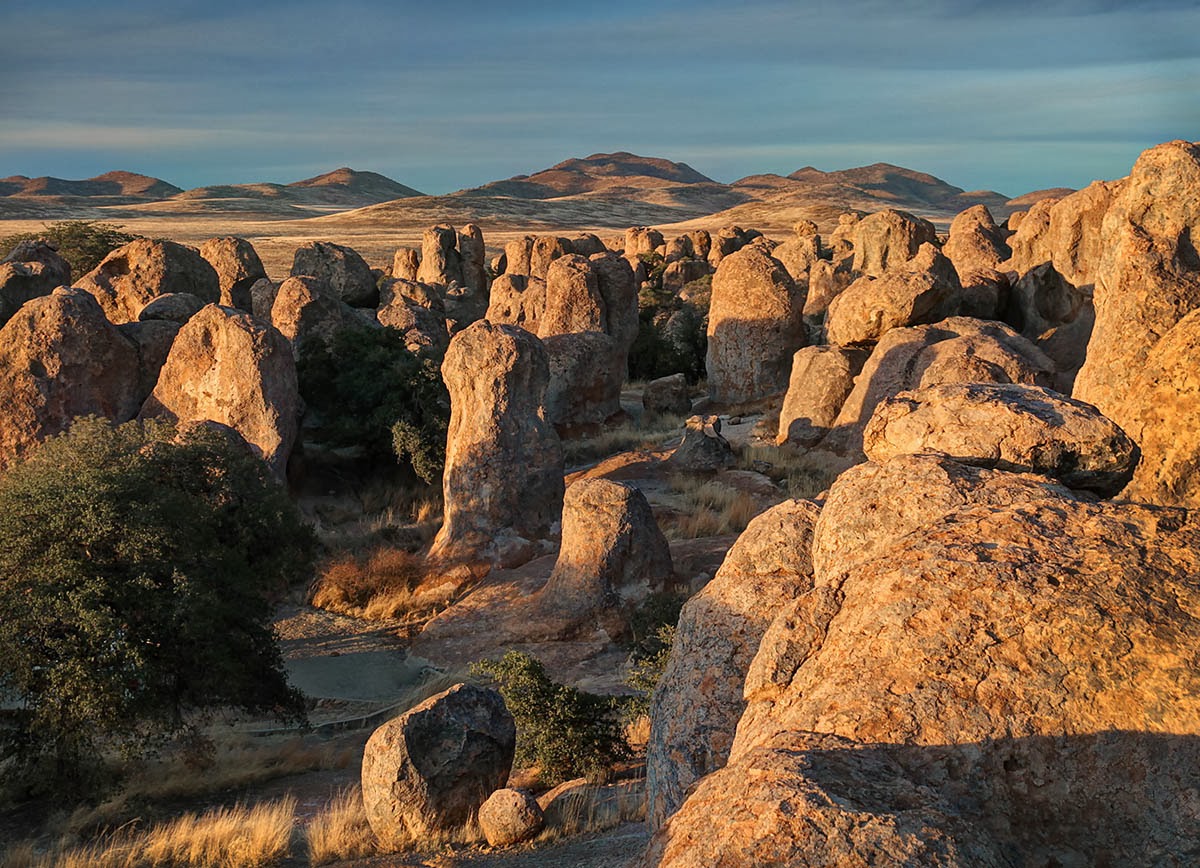 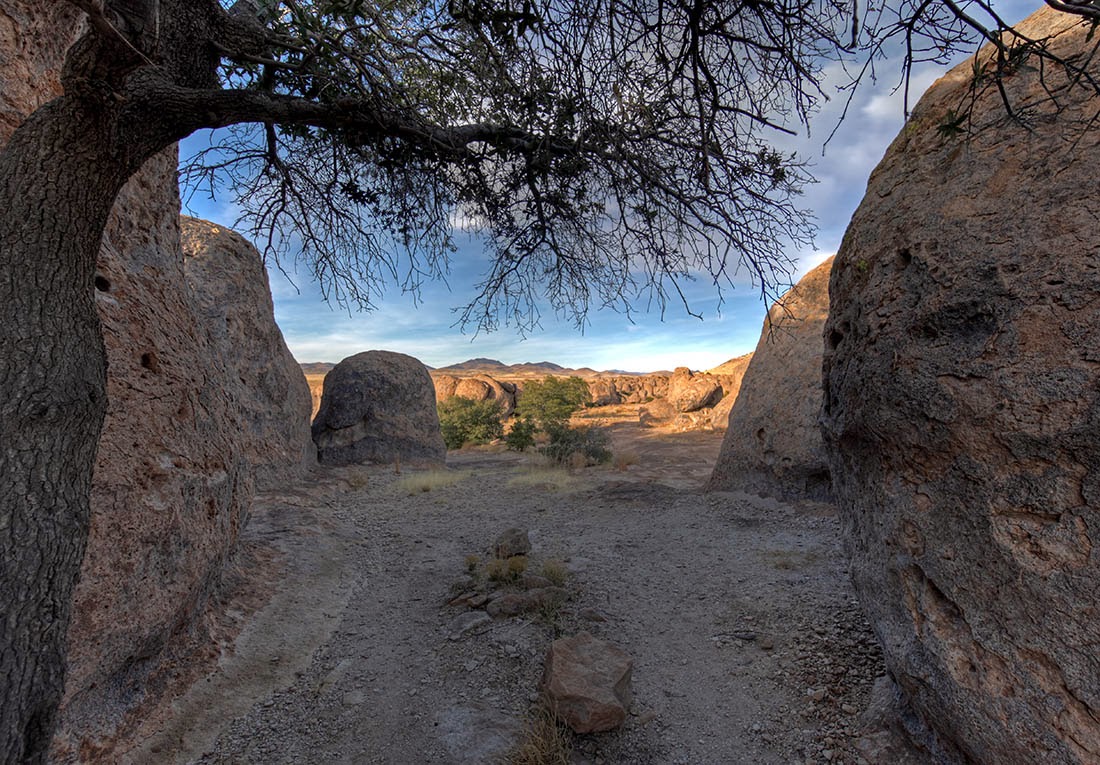 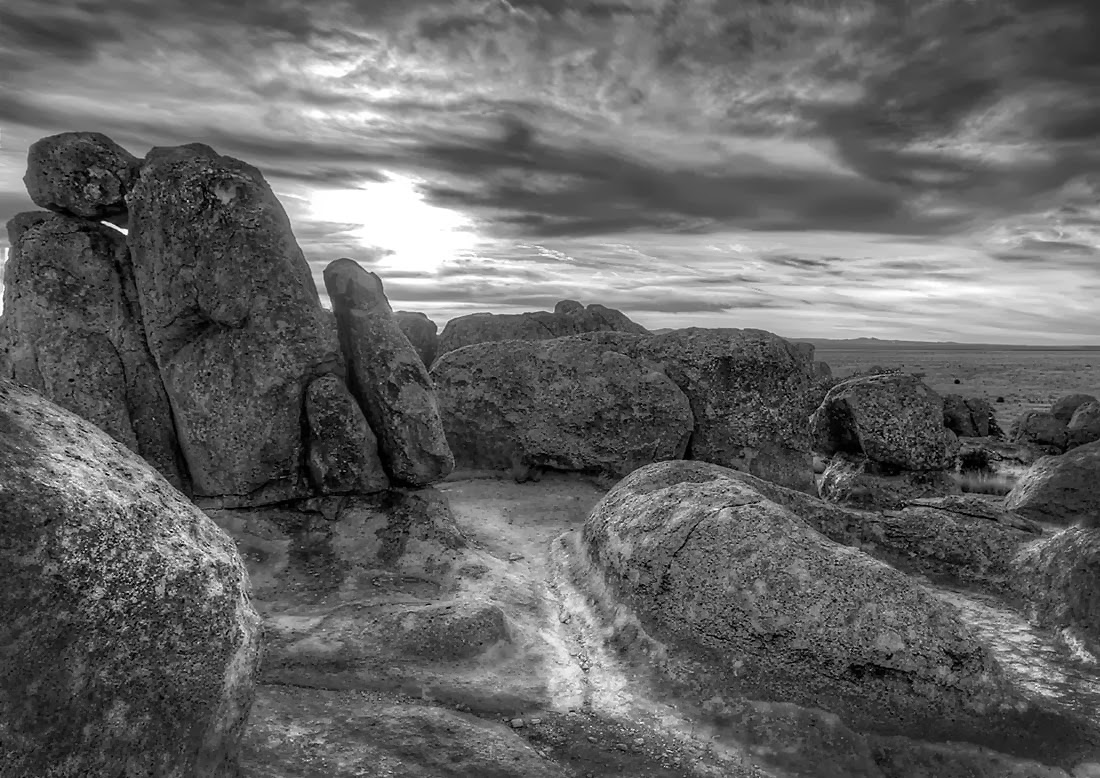 That's it for now in New Mexico.  We enjoyed staying at the Hidden Valley Ranch and, if we are back in this area, would definitely stay there again. On our last night there one of our fellow rver's stopped by our rig and offered to take us on an ATV tour of the ranch.  Since we were leaving the next morning we didn't get to do that but will take him up on his offer next time.