I haven't done a blog for a while because there's not too much going on here.  We are still at Blanding Landing near Galena because it won't stop raining!  Our boss, Ranger Brett stopped by on Monday (6/9) and let us know that it looked like we would be able to head over to Pleasant Creek by Thursday (6/19).  He called us on Tuesday (6/17) to let us know that with more rain expected we won't be getting into our Iowa site for another week or two.  Originally we were scheduled to be there from May 15th thru July 15th, the way it's been raining we'll be lucky to be there before July.  We did offer to stay an extra week if they need us.
We checked out Apple River Canyon State Park near Stockton, IL.  It's only about 35 miles from us and we thought it would be a good place to do some hiking.  Wrong!  The trail we took was only about 1 mile long and it was, of course, very buggy.   This has to be the smallest state park in Illinois - we drove thru the park for less than a mile and realized that we were already out of the park.  The campsites looked decent so maybe we'll come back to camp.

The gnat situation is still bad, we went into Dubuque looking for mosquito netting to wear over our hats and all the stores we checked with were out of it and not sure when more would be coming in.  We ended up ordering some online, hopefully it helps.  The gnats are ridiculous but we haven't seen too many mosquitoes yet, I'm very happy about that.

North of Dubuque, along the Great River Road, in the small town of Balltown, Iowa is Breitbachs - "Iowa's Oldest Bar and Restaurant". 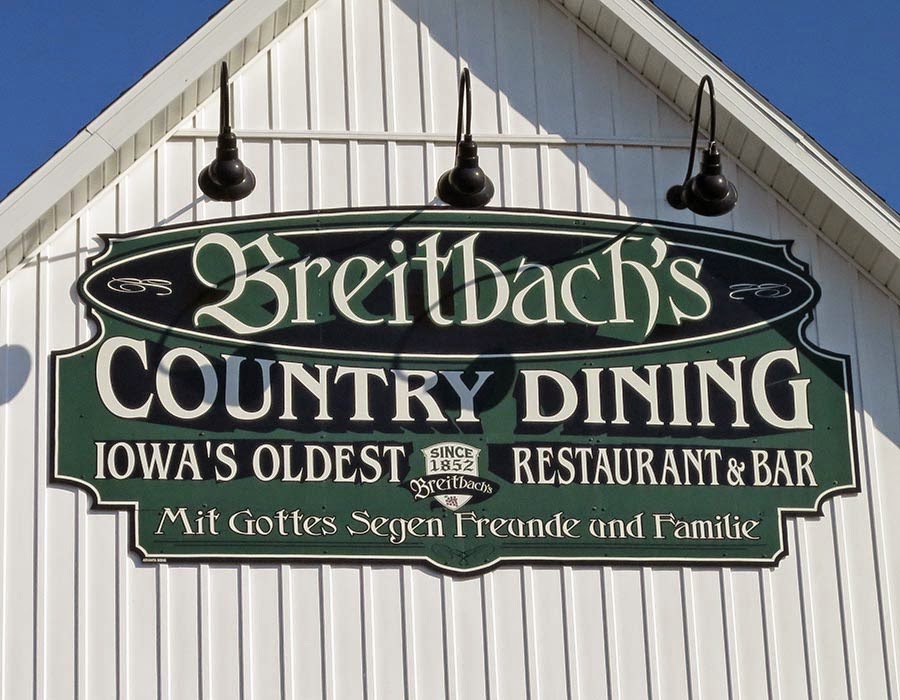 This restaurant has been owned by the Breitbach family since 1862!  The original building, which was destroyed by fire on December 24,  2007 had been nominated to the Register of Historic Buildings.  Less than six months after the fire, with the help of the local community, the restaurant was rebuilt and reopened.   On October 24, 2008 another fire struck the building and burned it to the ground.  Once again the family and the community rebuilt the restaurant and it reopened on August 1, 2009.

We stopped there for dinner -  everything is made fresh from scratch, we had the buffet and it was all delicious.  After stuffing ourselves we took a walk down the street to the scenic overlook.
When we got back in the truck we decided to look for the ferry that goes across the Mississippi from Iowa to Wisconsin.  We found it but the ferry wasn't running so it was back thru Dubuque, over the river and through the woods back to our campsite.

On Sunday (6/9), we took a drive back into Iowa to check out the "Mines of Spain" State Park.  There was a presentation being given about raptors so we stayed and listened.  We have seen a few eagles and hawks as we've driven through eastern Iowa and northwestern Illinois so it was interesting learning a little more about them.
They have some nice trails at Mines of Spain and we did try to do some hiking but the gnats drove us back to the car.  I really hope gnat season ends soon.

We had a surprise visit from my brother Tom and niece Elizabeth on Saturday (6/14).  He just bought a brand new car and decided to take it for a little road trip.   They didn't stay too long but it's always nice to have visitors!


Since we have all this time available to us we decided to take care of some appointments.  I scheduled an eye appointment in Oak Park on Monday and a vet appointment for Maddie on Tuesday morning in Fox River Grove.  After the eye doctor appointment we called Marty's sister, Amie, to see if we could stop in for a quick visit and, lucky for us, she was home.


We spent the night with the Schmidt's (Thanks Judy and Don!).  We left Crystal Lake on Tuesday night after stopping with some family member at Lou Malnatti's for some deep dish pizza.  We have not found pizza anywhere that's as good as Chicago Pizza!
More visitors came on Wednesday -  Mary Jane and Sue.   They came to our campground for lunch and then I drove back with them to Galena for the Trolley Tour.  After the tour we tried to find the road that would take us the 3 1/2 miles along the Galena River to the Mississippi but after many dead ends we had to give up.  We then decided to follow the Stage Coach Trail to the highest point in Illinois in the town of Scales Mound.  We stopped along the side of the road for a couple of rocks (I think Mary Jane's middle name might be Lucy).
It was wonderful catching up with them and we had a really good visit.  I'm lucky to have friends who like road trips - it's about 3-4 hours from Chicago.

We've been waiting five weeks so far for our campground to be open.  We have two channels on the tv (sporadically CW and CBS).   I have read so many books that I'm almost tired of reading.  I've crocheted a rug! Marty has caught up on most of his photo retouching projects.  If it wasn't for the fact that we do have  internet we'd probably be shopping for a house (just kidding).  It is supposed to rain all weekend, I think we need to get to Walmart so I can buy some more yarn - anyone need a new rug?   or afghan?  or scarf?

Do us a favor and leave your name in the comments, we're curious to see how many people are reading our blog - Thanks!

Last weekend, Memorial Day, the campground was about 90% filled, there were tents, pop-ups, and some rigs like ours.  There were kids playing on the playground and folks sitting around campfires.  Most of them were gone by Monday afternoon and on Tuesday morning we were all by ourselves again.  It's nice to have company and it's nice to see them leave.

Unfortunately for us the gnats didn't leave -  the minute we walk outside the rig we are attacked by gnats, they swarm us and make being outside no fun, not even for toasted marshmallows.  Marty has seen bats flying at dusk but they haven't done much to help (and they're another reason for me to stay inside).   This is the first time since we've started our adventure that I am not enjoying the great outdoors.

We played tourist on Thursday (5/29) and took a tour of the Belvider Mansion in Galena.  This three story mansion was built in 1857 when Galena was a bustling city and port of the Mississippi River.  Here's a link to it's history:  http://www.galenabelvederemansion.com/1.html 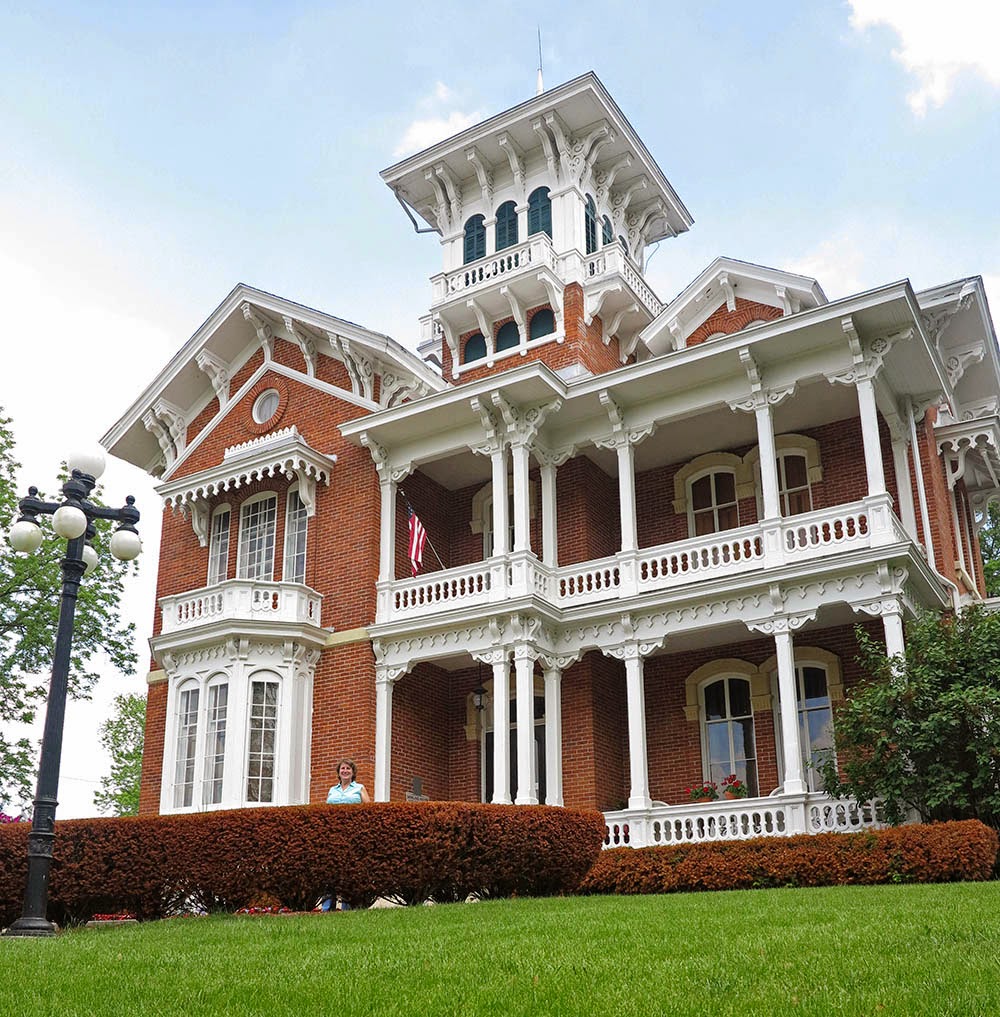 The current owners live in the three story mansion.  The third floor is where they stay during "tour" season but the rest of the year they live in the whole mansion.  It's amazing, the antiques are incredible - two chairs and a sofa belonged to Teddy Rossevelt, many pieces were bought from the estate of Liberace  and they even have a very ornate chair that came from the Vatican.    They also picked up something from an MGM sale, the famous drapes from Gone With the Wind - one of my favorite movies!  I never would have dreamed that those drapes would be in Galena - how cool is that?  No pictures were allowed inside the mansion but we were the only ones there and we asked really nice and they let Marty take the picture - Yay. 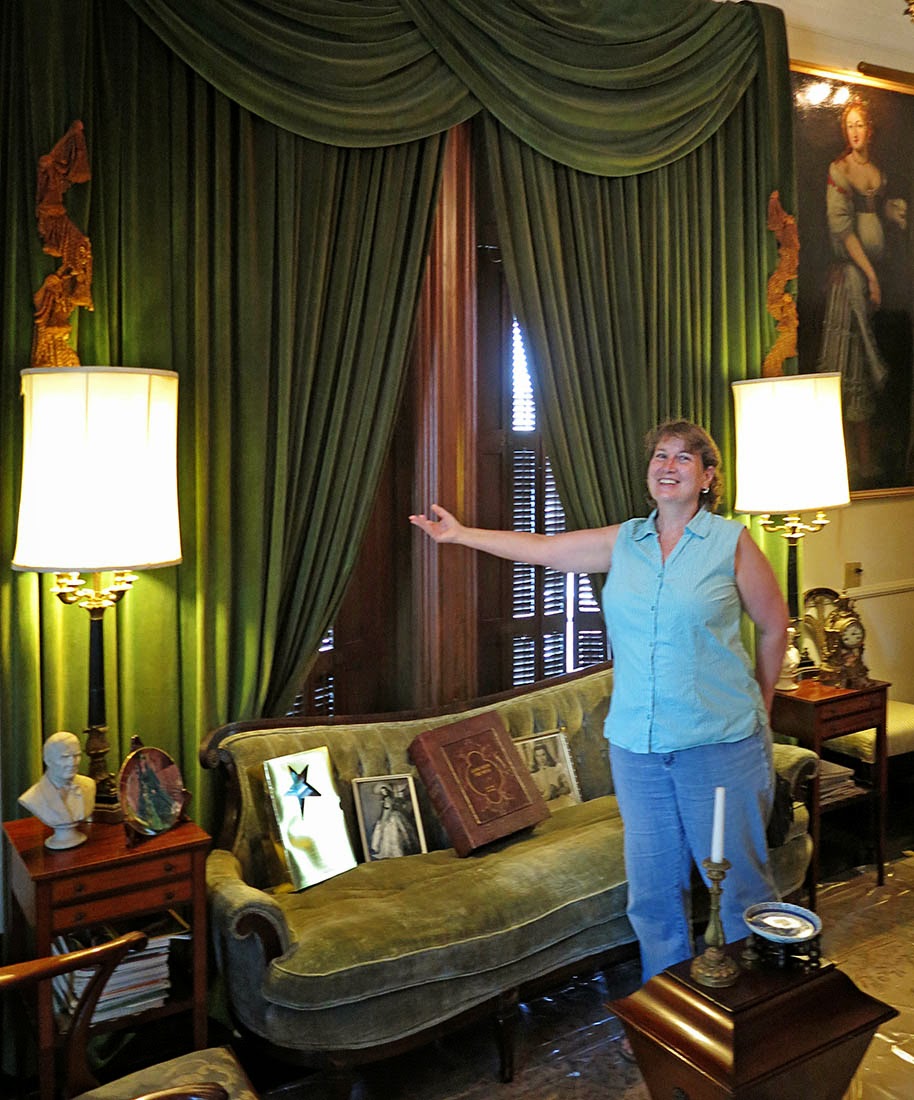 Galena has many beautiful homes and I'm glad we toured this one.  Amazingly, 85% of the homes in Galena are on the National Registry of Historic Homes.

On Saturday we drove 115 miles northwest to Devil's Lake State Park in Baraboo, WI for Megan's graduation party.  Tom and his girls try to go there at least once a year for hiking and it seemed an appropriate place for the party.  There are lots of hiking trails up and down the bluffs and a beautiful lake for swimming.  Some of the family went hiking and some of the family went kayaking (some even did both).  It was wonderful being able to spend some time with most of my family.  Megan's sister, Lizzie, wasn't there because she's in the hospital.  After three weeks of misery they finally admitted her and discovered that she has celiac disease which means no more gluten for her.  My dad also had this so any one reading this who has Merkes blood flowing through their veins should probably ask their doctor to be tested.


We are still at Blandings Landing and still don't know when we'll be going to Iowa for camp hosting.  We took a drive over there this afternoon and it seems like the river has gone down but there is more rain in the forescast - stay tuned.
Posted by m&m No comments: