Today is September 11th and our time in Forks has come to an end for this year.  We've had a great summer here but there is October baseball in this girl's future so it's time to head back to Chicago.

Did you know that you can get automatic updates of our blog when you "follow" us (I just found out how to do this).  Click the follow button on the right and get started

Even though we are here to volunteer at the Forks Timber Museum, Marty has found a few ways to make a little money.  The Visitor's Center next door to us has asked him if he'd be willing to shuttle hikers from their cars to whichever trail they want to hike.  He contacts the hikers and tells them how much it will cost and they make their arrangements.  One of the hikers was hiking the Shi-Shi Trail back to Rialto Beach (all along the coast), a distance of about 50 miles.  He anticipated taking 6-7 days doing it.  We picked him up at Rialto (1/2 hour from where we are) and drove him to the trailhead at Shi-Shi which took about an hour.  The shuttle service is a win-win, we make a little money and the hikers get to hike some amazing country.

We tried to hike Shi-Shi earlier in the summer but when we got there we couldn't find parking so we just explored a different area that day.  We did hike some of the trail when we dropped off our hiker, but at the end of the trail it's a very steep hike down to the beach so guess who decided to stay on top?

====================
We spent another day hiking out to Cape Alava which is the westernmost point of the United States.  It's a 3.4 mile hike one way so we got a lot of steps in that day! As we got closer to the beach we heard quite a few seals barking, they sounded like they must be right on the beach but when we got there we discovered they were way out in the ocean on a little island. They were quite noisy! 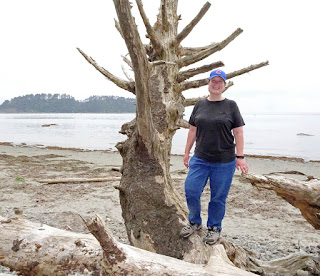 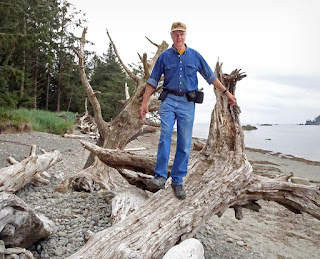 ====================
We were lucky enough to see the Perseid Meteor Shower on August 12th. We woke up at 2:30 A.M. and drove the 1/2 hour to Rialto Beach.  I just sat on my lawn chair looking up at the Milky Way and watching meteors shoot across the sky - it was so worth getting up early for; the skies were clear and it was truly amazing!!
====================
One Sunday evening we decided to take a drive on forest service road 29 ("A" Road) thru the Sitkum Solduc Forest.  We had no idea where we were going, just decided to do a little exploring.  We drove about 18 miles with the road narrowing (and climbing) and the pavement turning to gravel before deciding to turn around.  We weren't sure where we were going to come out and weren't brave enough to continue (it was getting dark out). We did stop a few times for photo ops.  The below photos were shot in infrared.  We found out later that the road did get worse but eventually would have taken us back out to 101.


===========================
On Monday, August 22nd we had an adventure of another sort.  We were lucky enough to join the Forks Chamber of Commerce on a tour of the Olympic Correctional Center, a Level 2 Facility.  It was very interesting. Level 2 is basically minimum security and all of the inmates have jobs either inside the prison or on the outside doing community service work.  The grounds at the Museum and Visitor's Center are taken care of by one of the crews.  There are 374 prisoners currently housed there with a capacity of 400.

Our first stop was checking in and turning in cell phones, wallets, keys (nothing was allowed in).  We also had to sign in and be signed out when we left.  That was the only time we felt like we were in "prison".  Our next stop was to a meeting room where we met Superindent Aldana (the big boss).  He presented a video, answered questions and then introduced one of the prisoners, Benjamin.  Benjamin is on one of the work crews that works outside the prison, he was very well spoken and seemed grateful to have the opportunity to be working outside the prison and learning skills that will, hopefully, be useful on the outside.  The motto of the prison is have a "Full Productive Day"

Our next step was getting split into groups of about 10 people and touring the facilities. Some of the areas we visited were the maintenance shop, the sew shop, the greenhouse, the dog house (where inmates work with rescue dogs), and the wood shop.  I thought the most interesting was the wood shop - they make beautiful items which are then donated to non-profit organizations to be raffled or auctioned off.  One inmate was working on a dollhouse which was absolutely beautiful.  He did it without plans and was planning to add a spiral staircase.  All that work and he just finishes it and then starts another project.

The greenhouse was pretty cool too.  We were encouraged to ask questions and they were very happy to share their knowledge of gardening with us.  We later had lunch inside and all the ingredients from the salad came from the gardens.  We had birthday cake for dessert but no files were hidden in the cake.

The Roosevelt Elk herd finally came back to visit us.  Aren't they amazing?  The herd this year seems larger than last year, there are probably 40-50 elk out there.  They hang out in the grassy area on the west side of the airport.


==========================
The second weekend in September is a big deal in Forks - it's Bella's birthday!  Who is Bella?  Obviously you haven't read the Twilight series of books written by Stephenie Meyers.  People come from all over the country (and world) for this celebration.  There are activities planned from Thursday through Sunday all over town and there is not a hotel room to be had.  Marty was asked to play at one of the events and he even revised the lyrics to "Werewolves of London" to "Werewolves of Twilight".  Pretty clever and very popular with "Twilighters".

====================
We were very happy to have Joe and Linda back after their month-long adventure in Alaska.  They had an awesome trip and we loved seeing their adventures on Facebook. 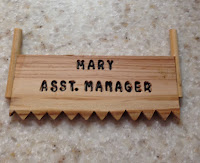 Linda surprised me when she got back by telling me she was promoting me to Assistant Manager and my pay has been doubled!  Of course, since we're volunteering, that's 2 x 0.  That's ok, the honor alone made my day (and the nifty new badge).  My summer has been spent entering more data into the museum database, doing a little research for some of the displays and a whole lot of front desk greeting and answering questions.

====================
We had a final get together with our fellow workcampers (Jerry and Lynne) and Joe and Linda on Saturday, September 3rd.  It was the last chance for all three couples to be together. This summer went by so quickly!  We will be back working at the museum next summer for three months, May, June and July.  After that who knows where we'll be - any suggestions?

We head out of Forks on Monday, 9/12 with an anticipated arrival in Chicago of 9/22 (just in time for the Cardinals-Cubs Series at Wrigley). We're looking forward to the trip back and have a few stops planned along the way - stay tuned!