June and July in Forks, Washington

So far, our summer in Forks has been busy with lots of visitors in June and lots of projects in July.  It's hard to believe that in just six weeks we'll be leaving here and heading back to Chicago (GO CUBS!!). I can't wait to see some OCTOBER baseball!!

Our first set of visitors were the Freeman Family - my sister Donna, her husband Rick and two of their four children, Sarah and Mark.  They are a very active group so we were kept busy showing them our favorite local sites.  We hiked in the Hoh Rain Forest, hiked along Rialto Beach to "Hole-in-the-Wall" and drove to Cape Flattery, the Northwest point of the United States.


If you'd like to see more of the Freeman's on the Olympic Peninsula, here's a link to a YouTube video that Marty made:

They left on Wednesday morning, June 8th and a few hours later we were in on our truck headed south to Olympia (about 3 hours away) to pick up Marty's sister, Jan. She took the train up along the Pacific Coast from Oceanside, CA to Olympia, WA - what an adventure that was!  36 hours on a train with crying babies and partying passengers and even a 6 foot tall male passenger wearing heels!

The weather for Jan wasn't quite as nice as it had been for the Freeman's but we still got in a lot of sight-seeing.  We drove up to Hurricane Ridge to see mountains (and even snow), drove to Rialto Beach to see the ocean and, of course, drove thru some of the rain forest.

I'm pretty sure that Jan's very favorite day was when we took her to meet Mick Dodge (from the National Geographic reality show, "The Legend of Mick Dodge").  He lives in a yurt about 1 1/2 miles north of us and he was happy to meet one of his biggest fans.

Our last June visitors were our friends Mary and Leo from the Chicago area.  Mary was the principal (and my boss) at St. William School and we've been friends for almost 20 years.  They only stayed two nights so we crammed in as much as we could.  By chance, they stayed at Huckleberry Lodge which is where Mick Dodge lives in his yurt. They stayed in a cabin (not a yurt or tent) and enjoyed their daily breakfast of pancakes and eggs cooked outside (along with cowboy coffee?).

We loved having so many visitors! It's pretty amazing how far people travel to visit us and we are very grateful to them for including us in their travel plans.  We LOVE showing off this beautiful part of the country!  By the way, we are coming back next summer (only for three months) so if you plan to travel to the Pacific Northwest let us know and we'll be happy to play tour guide.

We've spent most of July working at the museum and on various projects. Marty worked very hard stripping, sanding and staining the 12' Logger Memorial.  This statue was carved out of a single log about 20 years ago.

We've also kept busy in the museum; Marty has added a few photos to the walls and we've also done some research and added a few descriptions for various items.  I'm still working on entering items in the database, we are up to about 2300 objects!  I've just started entering information from the 6300 +/- photo cards (only 6000 more until I'm finished).  My favorite job is interacting with our visitors; we had a visitor from Myanmar (formerly Burma) who explained that her country was about 90% forest (Teak) and she recognized many of our older tools because they still use them in her country.  We've also had people from almost every state in the union; I think we're up to about 35 states since May.  We've also met quite a few full time rv'r's, it's always fun to compare notes with them.

We have one week off every month so we recently decided to take a road trip - yes, I know, our life is a road trip but this one was without our rig.  We left Forks on Monday (7/25) and took a drive southeast and headed to Walla Walla, Washington. I grew up hearing this song before every Cubs game and have become a little (ok, a lot) obsessed about going there.


"It's a beautiful day for a ball game, a ball game today
The fans are out to get a ticket or two
from Walla Walla, Washington to Kalamazoo"

We drove south along 101 and then headed east along the Columbia River (a beautiful drive).  We stopped at Multnomah Falls and took a short hike along a narrow cliff to get to the falls and visitor center.  This place was crowded!  We don't usually travel during July and coming here just confirmed our reasons why.

After leaving the falls, we continued our drive along I-84 along the river and ended up in the town of Umatilla, OR for the night.  In the morning we continued east about an hour until we made it to our destination. 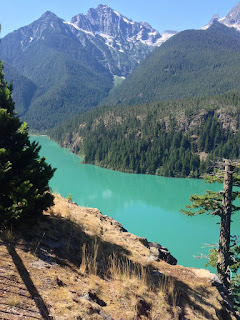 After all the excitement of being in Walla-Walla it was time to head back to Forks.  We wanted to continue our exploration of the eastern side of Washington so we headed north to connect with Highway 20 over the North Cascades.  The eastern side of the state is pretty barren and brown, nothing like the western side.  It was also much hotter with temperatures in the mid-90's.  We drove north to the town of Pateros, Washington where we found the last motel room in town!

On Wednesday morning we grabbed a quick coffee and bakery treat and headed thru the mountains back to Forks.  It was a beautiful drive along Hwy 20 which we took to Coupeville, WA where we ended up on the ferry to Port Townsend.  Port Townsend is only about two hours from Forks so after a couple of quick stops in Sequim and Port Angeles we were home by 9:00.

It was nice to go away for a few days but it's even nicer to be back in Forks where the temperatures are in the 60's and 70's and the skies are sunny!
We won't be doing too much traveling in August because Joe and Linda are going to Alaska for the whole month and leaving us in charge!!  We promised we wouldn't make too many changes although I do think the office would look nice painted purple.