After four months in Mesa we were happy to hit the road and head northwest to our summer destination - Forks Timber Museum in Forks, Washington.  We left Mesa on Monday, April 3rd and headed north thru Nevada.  Our first night was spent in a small campground in the town of CalNevAri which is at the border of - oh never mind, I'm sure you've already figured it out.

On Tuesday we continued thru Nevada heading to Pahrump (I just love saying that name!).  Pahrump is between Las Vegas to the east and Death Valley to the west.  There is an Escapee park (Pair-A-Dice) in Pahrump which had a special for 1st time visitors of $50.00 for the week - can't beat that.  I believe this is our 4th Escapee Park with that 1st time visitor rate, we still have a few more to check out.

We only drove into LasVegas once and skipped the "Strip".  It's too crowded there and hard to find parking.  Instead we visited the Pinball Hall of Fame and Fremont Street.

The Pinball Hall of Fame was a one (large) room of video games - old and new ones.  After getting some quarters, we enjoyed trying a few.  I'm not sure why they call it a "Hall of Fame" it really was just an arcade but it did have some cool old games.

Fremont Street is in the older section of LasVegas.  It's calmer and the casinos are older.  We had some good luck at Binyons - sat down at one machine with a $20.00 bill and came out with $100.00.  Then sat down at another machine and put in my voucher thinking it was a quarter machine and played maximum (what I thought was $1.50).  It was a dollar machine and very lucky for me, I hit and won $645.00!  It truly is better to be lucky than good.  I left that machine and Marty pretty much dragged me out of the casino before I could lose anything.

After our LasVegas adventure it was time to get back to nature.  We spent one day driving through Death Valley and checking out the sights/sites.  It's a beautiful park and I definitely would not go any later in the season than April.  We had temps in the 80's and in the summer it can get up to 120+.   The hottest temperature ever recorded in the world was 134 degrees in Death Valley in 1913!

Our first stop was at the Furnace Creek Visitor Center.  We like to visit the Centers, they usually have a movie that tells about the history and geology of the Park.  I also like getting my NP Passport stamped.

The next stop was at Harmony Borax Works.  They really did use "20-mule teams" to haul the borax out of the mines.

Badwater Basin was next on our drive.  This is the lowest (282 feet below sea level)  and hottest (can reach 120+ in the summer) point in the United States, you can hike out pretty far and you're walking on a salt crystal crust.  The visitor's guide says " Don't hike here in hot months".

Next we stopped at Golden Canyon for a little hiking. It was good to get out of the car and we hiked in about a mile before turning around.  It's pretty cool to hike thru a canyon (literally). 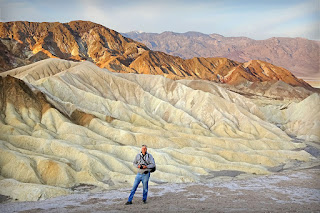 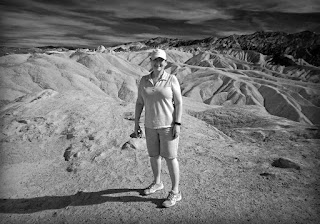 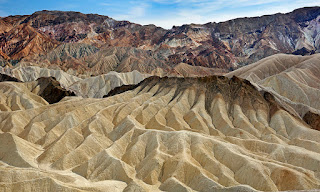 Death Valley is well worth a visit.  The best times to visit are November thru March/April.  One thing that we didn't see but that looked very interesting was "Racetrack Playa".   Here's a link:  https://www.nps.gov/deva/planyourvisit/the-racetrack.htm

After six days in the Pahrump area it was time to continue north.  We drove north on Highway 95 to the tiny town of Tonopah.  We stayed in a "RV Park" that was a parking lot behind a casino.  The best thing about the casino was the TV in the bar where I got to watch the World Series flag  raising ceremony at Wrigley Field (you didn't think I could actually write a post without mentioning the World Series and Cubs - did you?)

Tonopah was small but they did have two museums, an interesting cemetery and a "Clown Motel".   We visited everything plus drove south about 30 miles and visited Goldfield - "A living ghost town".
In 1907 Goldfield was the largest city in Nevada with a population of over 20,000.  Today the population is less than 300.  When we were there not much was open but we did visit an antique store and talked to the proprieter who was selling out and hitting the road in his RV.  We exchanged cards, maybe we'll run into him again some day. 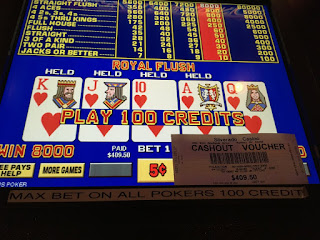 After two nights in Tonopah we continued our drive north and spent two nights in Fernley, Nevada at the Desert Rose RV Park.  Since Fernley is in Nevada and since every town in Nevada has a casino we had to try our luck. Hmmmmm, which casino looks lucky?  Since we have a Silverado truck and there was a casino named "Silverado" it was an easy (and lucky) decision.

We spent a day visiting Reno and Virginia City; just wandering around (need to get those steps in for the Fitbit).  It was very windy and blustery in Reno so we didn't last long outside.  Virginia City is a tourist town and it was fun visiting all the shops.  When we left Virginia City to drive back to Fernley we ran into snow flurries - Yikes!

We left Fernley on Friday, April 14th and drove northwest on Highways 395 to 44 to 89 to Weed, California.  The view out our back window was Mt. Shasta (when it was clear out).


We spent Satuday playing tourist.  First stop was the Visitor Center but since they didn't open until 10 we drove over to the local museum.  Amazing museum with lots of cool exhibits and we got lots of ideas to share with our friends in Forks.  We then drove back to the now open Visitor Center and got some information on things to see.  The woman at the Visitor Center recommended we drive over to Lake Siskiyou to get a good view of Mt. Shasta so that was our first stop.  We really lucked out with the weather and the view of Mt. Shasta was gorgeous.

After leaveing the lake we drove up Mt. Shasta as far as we could (lots of snow up there, so the road isn't open all the way to the top).  We climbed a little bit up the snowy road and had fun watching all the people playing (tubing, skiing, snowmobiling and just hanging out).  It was a beautiful sunny day, perfect for seeing the mountain. 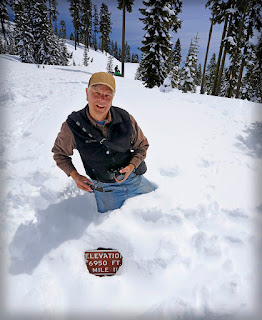 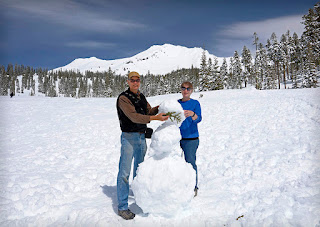 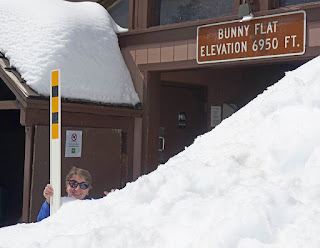 We got back in the car and checked out the water falls at McCloud River.  There are three falls, Lower, Middle and Upper and we visited all three.  We drove to the Lower Falls and then to the Middle Falls.  From the Middle Falls we hiked up to the Upper Falls.

We finished the day at the Hi-Lo Cafe back in Weed.  Nice place but strange waitress - she was very scripted.  Very unusual way of speaking and when we came back the next day she used the exact same script. Odd.

We left Weed on Monday (4/17) and headed to another Escapees Park, this one is in Sutherlin, Oregon right off of I-5.  We thought we'd be able to visit Crater Lake from there but the weather and the distance didn't work out.

There were some interesting creatures at this park - the biggest rabbits I've ever seen (thought one was a small deer).  There were also lots of turkeys wandering around along with some deer.  This is the most wildlife we've seen on this trip.  We stayed in Sutherlin for four nights, checking out the area (and one casino - our last one for this trip). 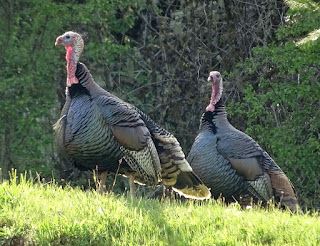 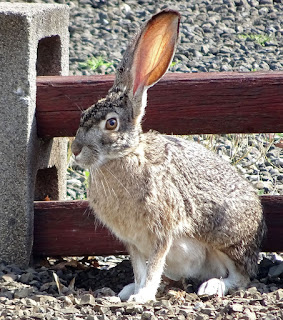 Once back on the road we headed to Cape Disappointment State Park in Washington.  This was our favorite park of this trip.  Even though it rained a lot we still had a good time.  This park is right on the ocean and we had a short walk from our site to the beach.  This is also the point where the Columbia River meets the Pacific Ocean and where Lewis and Clark finished their historic journey.
They have a wonderful museum detailing their trip and we spent at least an hour visiting it.  We also drove over to Long Beach and found Scoopers Ice Cream Shop - an amazing selection and huge scoops - YUM!

From this point it was only about 150 miles to Forks but we weren't scheduled to arrive until the end of the month.  There were winter work campers at the museum and they weren't leaving until Tuesday or Wednesday (4/25 or 4/26).  Since we had a few days left we decided to visit Hoquiam, WA which has a museum we've driven by (with the rig) many times but had never stopped at.  There is an Elks Lodge in Hoquiam with hook-ups so we parked there.  The parking was a grass field and since we've had lots of rain it was pretty muddy but we parked and settled in for a few days.

On Monday, 4/23 we drove about 60 miles to Olympia, Washington to Best Buy which we needed to visit since, once again, the cord on our GPS broke and needed to be replaced.  Cannot travel without our GPS!

The Polson Museum was not open on Mondays or Tuesdays so we finally got to see it on Wednesday morning. It was worth the wait, it's an old mansion and has many interesting exhibits plus its fun to wander around all the rooms and imagine what it was like to live in it.

After leaving the museum it was finally time to finish our travels and drive the 85 miles north along Highway 101 to our summer home of Forks! It's so nice to be back. We weren't able to park behind the museum right away because it's been raining (pretty much non-stop for months) and the gravel was a muddy mess.  We parked at the end of the parking lot for 4 nights and then were able to back into our regular spot - YAY.!  We are now all settled in and back to work (and play) at the Forks Timber Museum - Double YAY!! 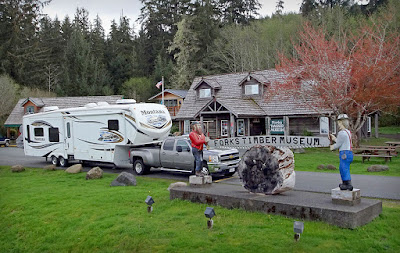