This has been a very busy month because we've had visitors!!  First my friend from Chicago, Mary Jane, came by on Thursday, June 25th with her niece and sister-in-law.  Her niece lives in Seattle and since we are only 3 1/2 hours away they stopped by.  I gave them a quick tour of the museum and then Mary Jane tried to stump Marty with a made-up question about logging.  He wasn't stumped (probably because the rest of us were giggling and he knew it was a set-up).  We had lunch at the bar and grill across the street and then we took a drive to the Hoh Rain Forest.  It was nice to see a familiar face and catch up.  It's a good thing Mary Jane likes to drive because that was at least 8 hours of driving!! 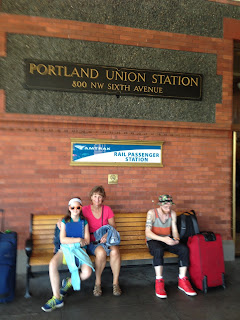 Our next set of visitors came on Monday, June 29th.  My sister Sue and her granddaughter, Sarah  took the train from Chicago, leaving on Saturday, June 27th.  They were supposed to arrive in Seattle on Monday at 10:40 a.m. but due to a forest fire they were re-routed to Portland and then would be put on a bus to Seattle which would get them to Seattle around 5:00 p.m.  This would have been fine except that we had decided that rather than getting up at 6:00 a.m. to pick them up we would just drive in Sunday night and stay near Seattle.  So, we were in Seattle and they were headed to Portland.  We decided to drive down to Portland, pick them up and drive up the west side of the Olympic Peninsula back to Forks.  I don't know if we actually saved any time but we got to see them 3-4 hours earlier so it was worth it.

Sarah was going to write about the whole train trip for the blog but this is as far as she got (I guess we were busy doing other stuff).  I haven't changed anything (as tempting as it was).
From Sarah:
On Saturday, June 27th my dad woke me up at 8:30 and he made me waffles because I'm special.When my older brother Matt saw me awake he started to be really innoing just because I was leaving. I  finally finished packing my train ride stuff ( like:stuffed animals, a blanket,a journal,and some other things.) Then I went to the kitchen to eat some breakfast. AKA: WAFFLES!! After I waited by watching one more episode of lab rats. Loved it. Next thing I knew  I was I on the Metra train with my grandma. When a hour went by, we went to go get lunch. We went to Anntie Annes. We had a pretzel dog (me and my grandma had one) it was a pretzel dough rapped around a hot dog. Then we checked in our suitcase.We asked were  we line up. On our way to THE GREAT HALL we stopped to take a photo of a Chicago cubs sign with a train. When we got to THE GREAT HALL I texted my mom on what she was doing. They went strawberry picking I don't know what I would rather do go straw berry picking or stay on a 49 HOUR TRAIN!!!!    I picked train and here I am with aunt Mary and Uncle Marty. On the train now to victory. the first few minutes was uncomfortable because my seat was missing a piece and my grandmas foot rest was broken. then we moved to the observation cart. My Grandma said she had some cards so I said can you teach me. She said lets teach you war. I got impatient and said is there any other game? She recomended chance i liked it because i kept winning. 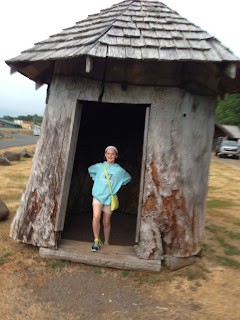 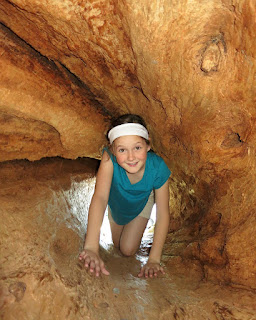 Once we finally got back to Forks, Sarah discovered that we have a "natural" playground, no swings or slides - just a giant log that you can crawl thru and on top of and a log house - what else does a 10 year old need?

Their first full day was a work day for us so Sue and Sarah got settled in and hung out until we  finished at 5:00 and then we headed to the beach for Sarah's first experience with the Pacific Ocean.
The next day (Wednesday, 7/1/15) was the first of our very busy sight-seeing days.  We drove to the Hoh Rain Forest for some hiking and then headed to Kalaloch Beach for some more ocean time.  On the way home we stopped at the "Big Cedar Tree" for some climbing and photo ops.
We got up early on Thursday (7/2) to get to Rialto Beach for low tide so we could see tide pools and "Hole in the Wall".  If you don't leave Hole in the Wall before the tide comes in you have to climb a very steep trail to the road, that was more than enough incentive to be there early.


After our morning at Rialto Beach it was time to head over to Sol Duc to hike up to the waterfall and then spend some time at the hot springs - what a wonderful way to spend an afteroon.  There are two hot spring pools and one regular swimming pool.  Sarah could not wait to go swimming, this was "the best day of the trip".

On Friday we drove to Port Angeles to catch the 12:45 ferry which took us to Victoria, Canada.    While there we visited the Bug Museum (thanks to Sarah) and then walked around checking out the shops.  After a nice dinner outside overlooking the water it was time to catch the 7:30 ferry back to the U.S.  The ferry ride was 90 minutes which went very quickly since Sarah is addicted to  card-playing and re-introduced me to a couple of games I haven't played in years.

Saturday was the Fourth of July and we spent most the day enjoying the Forks celebration.  The museum had a table at the craft show right on the main street and we had a front row view of the parade.  No fireworks due to the unusually dry condition - fire danger is high.


On Sunday, Monday, and Tuesday I worked at the museum so Marty took Sue and Sarah to Cape Flattery on Monday and to Hurricane Ridge on Tuesday.  It was very hazy at Hurricane Ridge due  to forest fires in British Columbia, the smoke has even drifted down to our area.  On the 4th of July, there were so many calls to the Port Angeles 911 operators about the smoke that the system shut down.


Wednesday (July 8th) was our last day on the west side of the Olympic Peninsula so we decided one more beach trip was needed.  We hiked the 1 1/2 mile trail to Third Beach and climbed over the tree trunks to reach the beach, it was worth it and probably the best of the beaches Sue and Sarah saw here.


We pulled the rig out of Forks on Thursday, July 9th and headed south and east to Puyallup, WA.  Puyallup is between Seattle and Mt. Rainier so there were lots of things to see and do.

Friday was spent at Mt. Rainier.  Unfortunately, after having some spectacular weather since we arrived in Washington it was now time for some clouds and rain.  The drive up to the Paradise Visitors Center was very winding and we were driving thru the clouds.  Once we parked our car and took a quick lunch break the weather was a little better and we went for a hike to see a glacier.  Marty and Sue made it to the top, Sarah and I went up about  3/4 of the way and then decided we were done.  We took a break and had a nice seat on a rock, the sun came out and we were able to see Mt. Rainier and the glacier (just not as close as Marty and Sue). 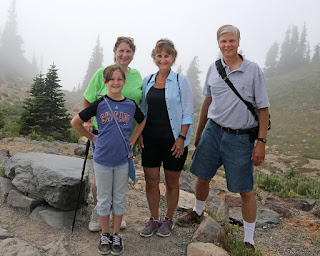 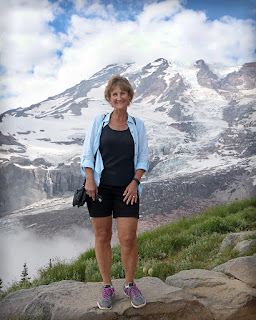 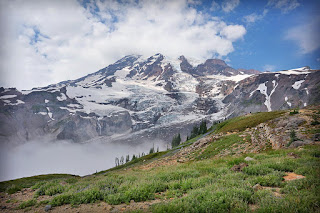 Saturday morning was spent at the Puyallup Farmer's Market (a very nice market).  There was lots of produce and baked goods.  They also had craft items and there were even some food trucks so that's where we ate lunch.

It's fun traveling with a ten year old.  Sarah had a margherita pizza for lunch and wrote in her scrapbook, " don't worry, all the alcohol has been baked out of it".  Gotta love the logic!

We spent Sunday in Seattle visiting Pike's Place Market (what a crowded place!), the waterfront (where we took a ride on the GIANT ferris wheel, and then had lunch at Ivar's.  After spending two months in Forks which has a population of 3100 it was strange to be in a big city.  It felt too crowded and I was happy to leave.


On Monday we went to the other side of Mt. Rainier (Surprise Visitor Center).  It was even cloudier and rainier than our last visit.  We did hear an interesting Ranger talk about marmots.
After all the hiking we've done the past two weeks it was nice to pamper ourselves with pedicures (Sarah's first).  Great way to spend their last few hours before we dropped them off at the airport for the trip back to Chicago.  It was a whirlwind of a trip, we really did a lot and I think we gave them a pretty good taste of Western Washington.
We were back in Forks on Wednesday (7/15. We did do one more "touristy" thing; on Friday we drove up to Sequim for their Lavendar Fest.  There were free tours available at about ten lavendar farms (we went to two - they smelled amazing!)  There was also a large arts and craft show in town.  That was fun and I even bought a few little lavendar-y things. 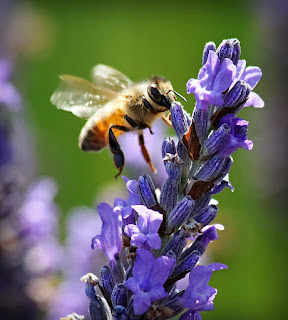 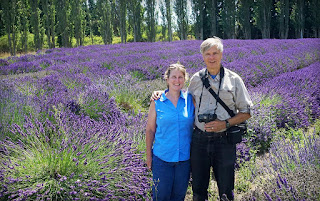 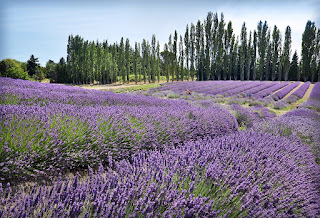 After all that sightseeing we've been relaxing back at the Museum.  We work Saturday thru Tuesday and seem to average between 20-40 visitors a day.  That doesn't seem like a lot but lately they all seem to come at the same time.  It's a fun job and we've met people from all over the world.  We like it here so much that we just told Linda we'd like to come back next summer.  So, if anyone is planning a trip to the northwest next year stop and see us.
Posted by m&m No comments: