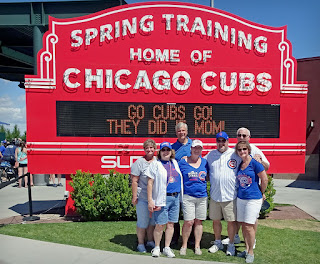 We arrived in Mesa on Tuesday, November 29th and started working on Thursday, December 1st.  This is our 2nd year working at Good Life RV Resort and once again we are working "Tables and Chairs".  We set up for all activities on the three days we work (Thursday, Friday, and Saturday) and also are required to work the larger parties (New Year's Eve and monthly Manager Happy Hour Parties).  We work a total of 40 hours a month and our rv site is free!  We can also participate in any activities and use all the park amenities, it's a pretty good deal.

Our days off have been lazy this year, Marty hasn't gotten many outside jobs so we've spent more time in the resort than usual. We did drive down to Tucson twice; once to visit the  Pima Air Museum and once to go to the Escapee's Escapade.

We went to the Air Museum on February 8th.  It had about 5 or 6 hangars filled with airplanes and some (not much) information on them.  There were also lots of airplanes outside, including a retired Air Force One.  We also took a tour of the "Airplane BoneYard" where decommissioned planes go to die (and picked over for parts).

Our visit to the Escapade was on March 23rd.  There were lots of vendors and we picked up some good information on solar panels.  We also got to meet Kay Peterson who along with her late husband Joe founded the Escapees.  She's member #1 and we're member #111673 - they've really grown.  Being an Escapee has worked well for us, in fact we're currently staying in Pahrump, Nevada at their Pair-A-Dice Park for only $50.00 for the week; you can't beat that!

The highlight of our time here was leaving Mesa on December 23rd and flying home to Chicago to surprise my family for Christmas.  We bought our tickets back in July and told Judy (since we needed somewhere to stay).  About two weeks before we left I also told Sue  (I have a hard time keeping secrets).

We arrived in Chicago late on 12/23 and hung out at Judy's until mid-afternoon on Christmas Eve.  Our family Christmas Eve was being celebrated at Judy's that night and Tom was coming in mid-afternoon from Wisconsin so Marty and I left to do some shopping; we didn't want Tom and the girls to see us until the party. One of our stops was at Costco where I discovered they had tons of Cubs World Series items.  I looked thru them, didn't pick up anything, walked away and then decided I did want another World Series t-shirt and book (you can never have too many CUBS WORLD SERIES T-SHIRTS!).  When we got back to the Cubs display, there were Matthew and Sue!  Poor Sue, she tried to act as surprised as Matt which was pretty funny.  It was actually a good thing that we did see Matt because he was playing Santa that night and we wanted to tell him that we'd be on the front porch and when he was done passing out presents he should say that he forgot something outside.

After Costco, we headed over to Sue's to hang out until it was time to go to Judy's.   We sychronized our watches and waited for the text from Judy to head over.  She sent the text and then another saying "hurry, he's almost done!".  We got there just in time, they opened the door and it was awesome - we totally surprised the family (well, most of them).  It was so nice to be home for Christmas and to see everyone!  We spent four full days in Chicago and got to see Marty's sister, Amie and also caught up with my Aunt Mary and Uncle Bob.  The time went quickly but it was so worth it.  We even brought good weather - it rained while we were there and washed away all the snow and it didn't snow again for two months - You're Welcome!

Back in Mesa, it was back to work.  We helped set up for New Year's Eve; that was a long day, we set up and then had to tear it down after the party.

It wasn't all work, the World Series trophy came to Mesa and we were up early and at Sloan Park by 8:00 AM on Friday, February 24th to see it.  The first 1000 people were given wristbands which allowed them to get their picture taken with the trophy.  We were within the first 500 so we got our green wristbands and then waited until about 2:00 for the photo op.  While waiting, a man walked thru the park flashing $60.00 and asking if anyone would sell their wristband.  Marty wanted to do it but I didn't want him to.  Marty then asked for $100.00, the guy only had $86.00 and Marty sold his wristband. I hung on to mine and was thrilled to get my picture taken with the trophy.

We did have visitors in March - Sue and Earl, Jeanne and Jim, and Joe and Roseanne.  Sue and Earl stayed in our park and the other four stayed in their new (to them) trailer in a park about 6 miles east of us.  We had a good time visiting and teaching them a new game - Mexican Train (a dominos game); they were hooked on it pretty quickly.  We also went to a spring training game against the Giants (we lost).  Sue, Earl, Marty and I also visited the Musical Instrument Museum in Phoenix - what an awesome museum.  It was divided by continents and by the time we got to North America we were all exhausted.  This is a museum that you should join so that you can spend an hour or two going thru each continent.

The Sibs left on Saturday, April 1st and Marty and I left Mesa on Monday, April 3rd.  We will spend the rest of April traveling and exploring and will be back in Forks by May 1st. 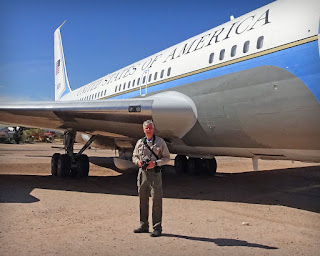 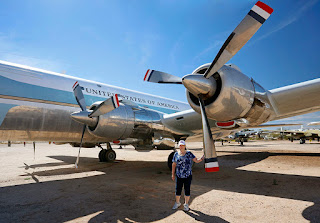 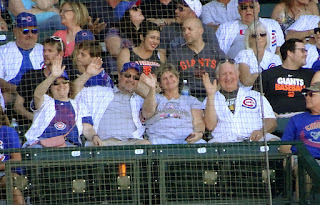 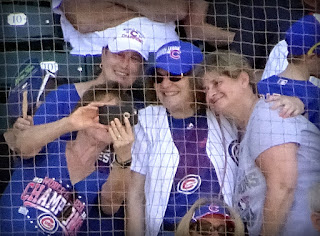