Every spring the fourth graders at St. William School ask us to share our adventures with their friend, Flat Stanley.  This year Flat Stanley traveled with us to California and asked if he could write the blog post; so here it is-------

Mr. and Mrs. Konopacki invited me along on their adventures through California.  California is on Pacific Time which means that when it’s 8:00 A.M. in Chicago and St. William School is starting class it’s 6:00 A.M. in California and the school children are just waking up.

We left Arizona on April 1st  and headed west towards the largest city in California, Los Angeles.  It was so big and busy!  The expressways all had 5 or 6 lanes on each side!  Mrs. Konopacki didn’t like it but she was happy to be there because her favorite baseball team was opening their season in the nearby city of Anaheim - Go Cubs!!  We had lots of fun at the baseball game and the Cubs Won- YAY!  Mrs. Konopacki says it is going to be a very exciting year in Chicago for baseball fans.  We were sitting by a little boy who was picked for a base-running game they play - he had to go out on the field and run from 2nd to 3rd base, pick up the base at third and run back in 25 seconds - He Did It!!  It was so much fun because we could see him on the big screen and everyone was cheering for him.  Boy, I wish they had picked me - I bet I could run that fast.

The Santa Monica Pier isn't as exciting as Disneyland but it is the end of Route 66 which is pretty cool since Route 66 starts in Chicago.  The Konopacki's have now been to both ends and have also driven many of the miles in between. 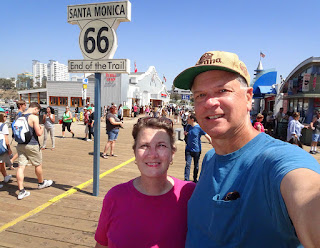 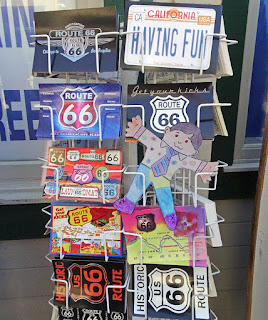 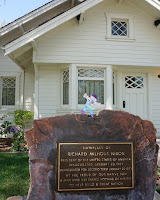 We spent another day visiting the Richard Nixon Presidential Library and Museum in Yorba Linda.  Mr. and Mrs. Konopacki like to visit presidential sites throughout the country.  The most interesting thing about this one was the people we met - Fred and Nathan Hernandez.  They are brothers and they both served in the U.S. Navy.  They were involved in Korea, the Bay of Pigs, and Viet Nam.  We really enjoyed meeting and talking to them.  One other interesting thing about them is they married sisters so their kids are "double cousins". 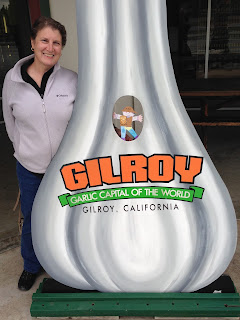 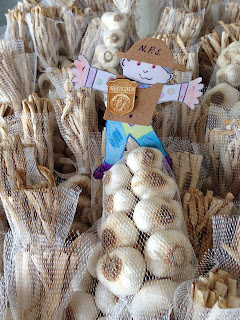 While in Salinas we also visited The John Steinbeck Museum; he is one of Mrs. Konopacki’s favorite authors.  She said that his book “Travels with Charley” started her on wanting to travel around the country.  He wrote many books about different events in California history including the dust bowl, and migrant workers.  Many of his books were made into movies so now the Konopacki's have a new goal - watch all the movies based on John Steinbeck books.

Napa is not too far from San Francisco so one day we drove to the town of Vallejo and took a ferry boat across the bay over to San Francisco.  We walked around for a little while and then decided to take a double decker bus tour.  We sat on top, that was fun but a little scary when we had to duck our heads for trees.  San Francisco is a very interesting town with lots of neat areas.  We saw the Golden Gate Bridge, Alcatraz Island, Cable Cars, the crookedest street and even the house from the TV Show “Full House”.  There were lots of fancy houses called Victorians; they were painted with many different colors and are called “Painted Ladies”.  Maybe when I grow up  I’ll come back here and live in one.

On our last day in the Napa area we took a drive along the coast to Point Reyes National Seashore where I got another Junior Ranger Patch!  That wasn’t even my favorite part - my favorite part was when we looked out at the Pacific Ocean and saw two whales!!  How cool is that?  Mrs. Konopacki was very excited to see them and very happy that I got to see them too.  The whales spend the winter in Mexico and then migrate north up towards Alaska.  We were very lucky to see them. 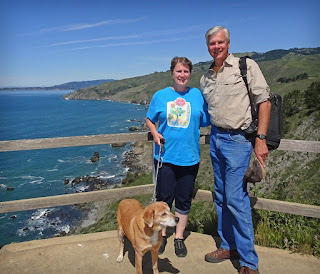 We continued our tour of California by driving north on Highway 101 which runs along the Pacific Ocean.  Our next stop was Ferndale which also had some “Painted Ladies”.  It’s also the hometown of Guy Fieri - have you seen his TV Show, “Diners, Drive-In's, and Dives”?  The drugstore in Ferndale is the oldest drugstore in California!  There have also been many movies filmed in town.  For such a small town (population is only about 1400) they sure have a lot of history.  The reason we decided to stay in this very small town is because it is close to the Redwood Forest.  We drove along the “Avenue of Giants” which is what they call the Redwood Trees.  They are pretty amazing! 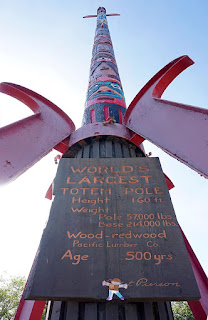 Well, that's it for this post and my adventures in California with the Konopacki's.  It was fun, we sure did a lot in the three weeks I was with them.  They will be mailing me back to St. William from Oregon where it's been rainy and in the 50's and 60's.  I think I'll be glad to be back in Chicago!


This was our third March spent in Mesa and we still haven't gotten tired of temperatures in the 80's and sunshine every day.  We stayed at the same park as last year, Good Life RV Resort but this year we didn't work camp so we paid for our site.  It all worked out since Marty had some photo work in the area and that covered a nice portion of our fees.

It was nice to be back at Good Life, we've made some friends there and it was fun to see them and catch up.

Since we weren't working we had lots of time for playing.  We joined the bike club on their Monday morning bike rides, Marty played at the Open Mike on Tuesdays  and I took card-making classes on Friday mornings.  We also walked the 1.3 mile perimeter of the park at least once a day (when it wasn't too hot).  Marty often used the music room in the evenings to practice his guitar.


We also got in some visiting with family and friends.  We surprised our niece Sarah (back in Chicago) with a picture of us having dinner with her boyfriend, Milad (he's in dental school here in Mesa).  In the middle of the month we had a visit from friends we met at our first Habitat for Humanity build back when we started this journey.  We had a great time catching up with them! At the end of the month we had lots of visitors from Chicago.  Sue, Jeanne and Jim, and Joe and Roseanne all came down for spring training.  My cousin Dave and his wife Beth were also here checking out the area since Dave has accepted a job move to Phoenix.  They've already bought a house here and once they sell their house up north they'll even have furniture in it.


Of course March in Mesa means spring training and this year we went to two games and they won both!  It's going to be an exciting year on the North Side this year and I can't wait to be back in Chicago for some October baseball.


The Mesa area has a lot of opportunities to explore nature and on our very last day there we decided to take a hike at the Usery Mountain Regional Park.  Not just any hike but the most difficult one there! We hiked the Wind Cave Trail which was only 1 1/2 miles (one way) with an 800' elevation climb and boulders and rocks to climb over.  How bad could it be when there is a 92 year old man at the beginning of the trail telling us he's done it many times (just not recently).  It was beautiful at the top and I hit 16,000 steps on my fit bit and 75 flights of stair so I guess it was worth it. 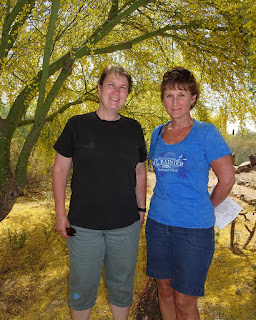 We left Mesa on Friday, April 1st with our friend, Flat Stanley.   We made one last stop in Arizona to visit London Bridge in Lake Havasu.  This is the actual London Bridge from England which was bought by a very wealthy American and it is quite the tourist attraction and has really put this town on the map.  https://en.wikipedia.org/wiki/London_Bridge_%28Lake_Havasu_City%29 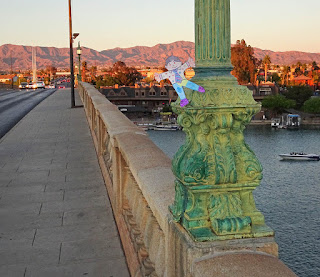 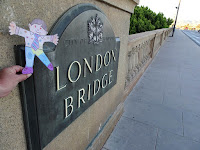