We left Forks, Washington on Monday, September 25th and after a long stop in the Midwest we made it to our current site in Myrtle Beach, South Carolina on Wednesday, December 13th.  We traveled through Washington, Idaho, Montana, North Dakota, Minnesota, Wisconsin before finally reaching Illinois on Monday, October 9th.  We left Illinois on Sunday, November 27th and made our way to South Carolina.  It's been a very busy three months! 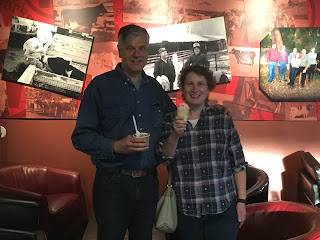 We spent our first night on the road in Ellensburg, WA at the same park we stayed at last year - Yakima River Park.  We got one night at 1/2 price with our Passport America membership so we only spent 17.50 for the night.  We had dinner at Fire and Smoke  Barbeque which was as good as any we had in Texas and then went for some ice cream at Winegar's which was recommended to us by friends we met last winter in Mesa - thanks Rick and Beth!  If you are ever in Ellensburg, Washington you have to stop for ice cream here, it was delicious!


From Ellensburg we drove to Couer d'Alene, Idaho (9/26 & 9/27).   We've driven through this area the past two years but have never had a chance to stop.  The city is on Lake Couer d'Alene which is a 30 mile long beautiful lake.  We were there when the weather was sunny and in the 70's, you can't beat that.  Our campground, Tamarack RV Park, was in the middle of a neighborhood and the sites were tight but the location was very convenient.  Once we were set up we drove downtown to the Visitor's Center, picked up some information and then walked next door to the Museum of North Idaho.  It was a nice museum, with interesting information on the history of the area and they had a very large gift shop with some fun souvenirs. 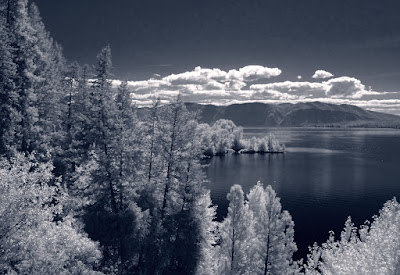 On Wednesday (9/27) we took a day trip to Lake Pend Oreille.  During World War II, the south end of this lake was the second largest naval ground in the world.  The lake is still used by the Navy's Acoustic Research Department to test large-scale submarine prototypes.  The training station is now Farragut State Park and includes a museum detailing the history of the submarine training.  Unfortunately for us it's only open from Memorial day through Labor Day.  We thought it was pretty interesting that there was submarine training in Idaho during World War II and really were looking forward to learning more.  This part of Idaho is beautiful and well worth another visit. 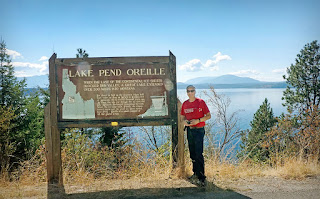 MONTANA
From Idaho we continued traveling east and made it to Essex, Montana which is at the southern end of Glacier National Park.  We arrived on Thursday (9/28) and could only stay 2 nights because they were closing for the season on Saturday.  We knew taking the northern route back to the midwest was going to be iffy; the weather was fine (so far) but finding parks in October is proving to be a little challenging.  We spent Friday exploring Glacier NP, mostly in the car but we did take a hike to a waterfall.  The "Going to the Sun" road was only open to Logan's Pass so that's as far as we went.

In 1850 there were approximately 150 glaciers in the park.  Scientists have predicted that by 2030 many(if not all) of the glaciers will be gone.

On Saturday morning we traveled Highway 2 east to the tiny town of Glasgow, Montana.  We stayed one night at the Shady Rest Campground; the temperatures were dropping and snow was in the forecast so it was time to get out of Montana.

NORTH DAKOTA
We stayed at our first State Park in a long time on Sunday (10/1) - The Little Missouri State Park near Kildeer, Norh Dakota.  Once we turned off the highway, it was quite a drive, the 3 mile road into the park was dirt and it was raining - not a good combination!  Our rig was covered in mud - YUK.  Once we were set-up, Marty hosed it off (in the cold rain).  We were the only ones staying at the park and our big window looked out over the ND Badlands, pretty nice. 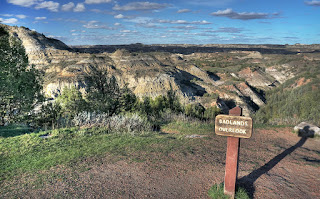 The reason we chose to stay at this park was because it's near Theodore Roosevelt National Park.  We visited TR National Park back in 2008 and really liked it so we decided to spend a full day sightseeing here.  On Monday we visited both the North Unit and the South Unit - lots of driving but it was a beautiful day and we saw lots of bison and prairie dogs and the colors were pretty nice too.

We were back on the road Tuesday morning (10/3) and got on I-94 to make some time.  We needed to be in Chicago by October 9th because I had tickets for the Cubs on October 10th.  We drove about 325 miles and stayed at a Wal-Mart in Fargo, North Dakota on Tuesday night and then drove all the way across Minnesota and into Wisconsin on Wednesday (10/4) where we found a US Army of Corps of Engineers Park (Eau Galle Dam and Reservoir) in Spring Valley.  We really like COE parks, they're always near water and usually very scenic and this was no exception.  Next year, when we're 62, we'll even get to stay in them for 1/2 price!


Our next stop was only 200 miles away in LaCrosse, Wisconsin  Our niece, Elizabeth, is a sophomore at University of Wisconsin-LaCrosse and we like visiting her.  We found a nice county park (Veterans Memorial) last year and decided to stay there again - four nights this time (10/5 - 10/8).  We had a nice dinner with Liz on Friday and then went back to see her on Sunday where we got to meet her boyfriend, Alec, and also see our great-niece Kinsley.

We arrived in Illinois on Monday, October 9th.  We pulled into General RV to have solar panels installed on our rig.  We need them because we are going to spend the summer of 2018 in Maine volunteering at a Logging Museum and there is no electricity there.  They do have generators available but we want to supplement with solar.  We stayed in the rig the first night and then packed up our stuff and headed over to Judy and Don's for the week. We sure are lucky to have family that lets us stay at their home when we need.  Best of all, there is now a queen size bed (rather than the double we used to sleep on).  They sure make it nice for us! 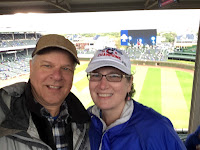 We always enjoy being back in Chicago in October.  I usually get to at least one Cubs Game and Marty likes to visit his musician friends at Beatles Camp which is held the second weekend of October.  We catch up with lots of family and friends and it's so nice to see everyone.


We stayed at three different campgrounds in Illinois.  The first one, Paul Woolf, closed on 10/31.  The second one, Camp Reinberg in Palatine only allows stays of 10 days.  Our third one, Illinois Beach State Park stays open until 12/31 and that's where we were until 11/27.  If you are wondering why we stayed in Illinois so long (and it did get pretty cold), it was because I took a week-long side trip to Paris with my sister Sue and niece Sarah!  I got back on 11/25 and we were on the road again on Sunday 11/27.  I had a wonderful time in Paris and Marty got to spend Thanksgiving with his sister and some of her grandchildren so everyone was happy.


Here are a few pictures of my European Vacation (if you want to see more they're on Facebook):


When we got back to Chicago I got to meet my newest great-nephew (not so new anymore, he's 9 months old in this picture)

We had a slight incident with our rig going into Illinois Beach SP.  There are two units at this park, the south unit is where the campground is located.  Unfortunately, the GPS had us go into the north unit and we hit some very low branches which destroyed the A/C cover on our roof.  It's never a good feeling to see pieces from your rig on the road.  Luckily there was no damage to our air conditioner and our brand new (and very expensive) solar panels.  We found a RV dealer nearby, ordered a new cover and Marty installed it.

We left Zion (Illinois Beach SP) on Sunday, 11/26.  It was the end of the Thanksgiving weekend so traffic was pretty heavy and we only made it as far as the north side of Indianapolis.  We stayed overnight at Wal-Mart and got an early start on Monday.  I was not feeling well and was very happy to arrive at our next destination of Heiskell, TN (near Knoxville).  Marty ended up with the same bug that I had so we planned on a week here before continuing east to South Carolina.

On Saturday (12/3), we received the sad news that Marty's nephew had passed away.  He was 44 years old so it was quite a shock to everyone.  We made arrangements to leave our rig at the park we were in and headed back to Chicago.  It was a nine hour drive and much easier without the rig.  We stayed up there for a week (thanks again Judy and Don) before making our way back to Tennessee on Sunday, 12/10.


We decided to have a do-nothing Monday so we left Tennessee on Tuesday and arrived in our current location of North Myrtle Beach on Wednesday (12/13).  We will be here until January 13th and then it's further south for us.

We have no definite plans (or reservations) but I just learned that the Cubs are opening their season in Miami this year so guess where we'll be on March 29th?