Now that we have settled in at our home for the next three months in Mesa, Arizona, I finally have time to catch up on the past two months.

Working at Amazon and seeing the sights in Louisville

We worked for Amazon from 10/28 until 12/20 with WORK being the operative word!  We started out in Campbellsvile, KY working nights from 5:30 pm until 4:00 am.  We liked those hours, it was nice leaving for work while the sun was still shining.  We were back home by 4:30 and asleep by 6:00.  We'd sleep until noon or one and then start all over again.

In mid-November, Amazon asked for 100 campers to move north to Clarksville, IN.  The incentive offered was a $500.00 bonus per worker.  It sounded good but we were comfortable where we were and decided to take a pass.  There were only about 35 campers who agreed to make the move north so Amazon decided to up the offer to $1000.00 per camper willing to make the move - that was an offer we couldn't refuse.   Unfortunately there were about 80 other people who felt the same and we received a call that we hadn't made the cut but were first on the waiting list. One hour later, two people had dropped out and we were in - YAY!

We moved up to Clarksville, IN on Saturday, 11/22 and settled in at the KOA.  Clarksville is just across the Ohio River from Louisville, KY and about 90 miles north of Campbellsville.

Our first day of work in Indiana was Tuesday, 11/25 with orientation and some training.  We worked from 7:30 until about 3:30.  We began working 10 hours (6:30 am until 5:00 pm) the following day and continued thru Sunday.   Our shift was Wednesday - Sunday, 10 hours a day.  We worked wherever they told us.  We re-binned, packed, gift wrapped (yuk!) and prepped jewelry.  We both liked re-binning the best, we pulled items from totes, scanned them and placed them into the appropriate slot on a "re-bin" cart.  There were 5 shelves and five slots on each shelf and each slot represented orders with multiple items.  We were continuously on our feet but we were moving and bending a lot and it was the easiest job on our bodies.  I wore my Fitbit a few days and found that I averaged 5-6 miles walking a day. This job was hard, standing for 10 hours is hard on the feet and back and most nights I crawled into bed around 8:00 with the intention of reading for a little while and never getting past a few pages.  We were up at 5:00 am every morning to start the fun all over again.

The job I liked the least was "tote turning".  It is exactly what the name implies, you stand by the conveyor belt and turn the plastic totes from vertical to horizontal.  And, when it gets real busy, you get to take the totes off the conveyor belt until there is room and then place them back on the belt - whoo-hoo!  Unfortunately for me there were maybe 4-5 totes every 10 minutes, talk about boring.  I did go to talk to the supervisor to see if I could be switched somewhere else but was told that this was a very important job and I needed to stick with it.  Luckily I only needed to "stick with it" for one day!

We didn't spend all our time working (even though it felt like it).    We spent an evening driving with our Camperforce friends, Herman and Linda thru the Mega Cavern to enjoy "Lights under Louisville".  Here's a link to the Mega Cavern, it's pretty incredible; at Christmas they decorate with lights and you can drive through and take pictures - it's about a mile long. http://www.louisvillemegacavern.com/about/history.html 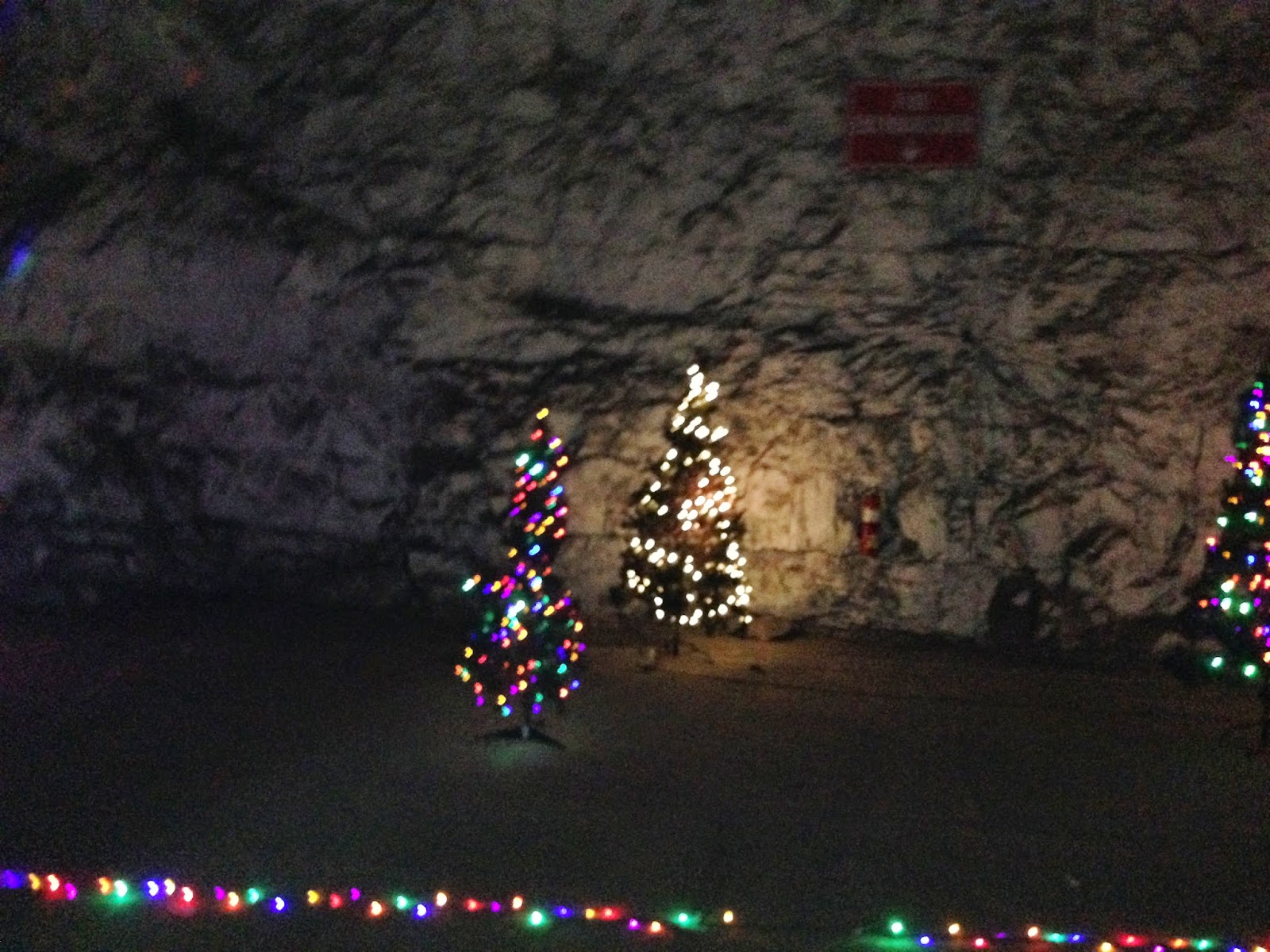 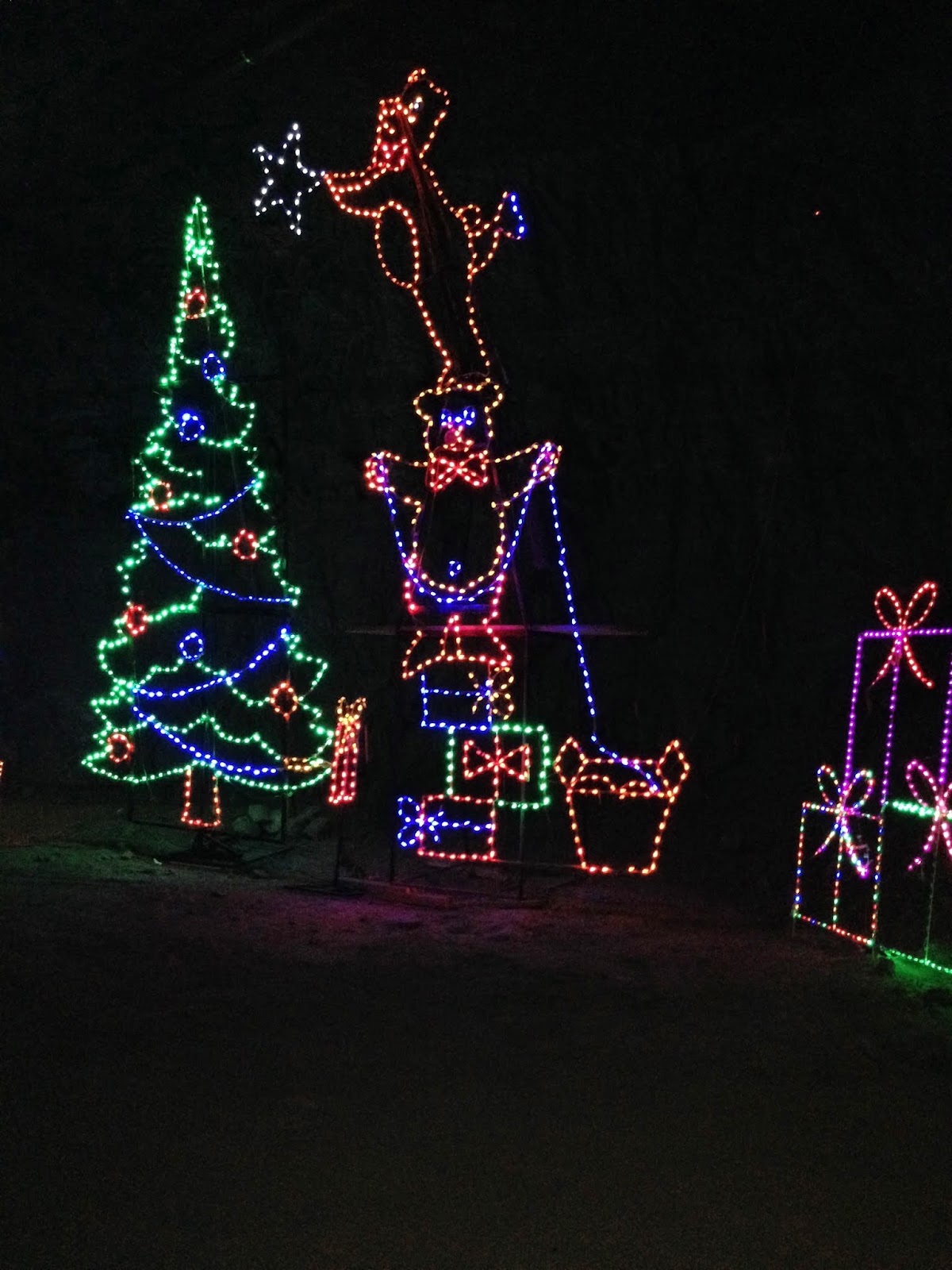 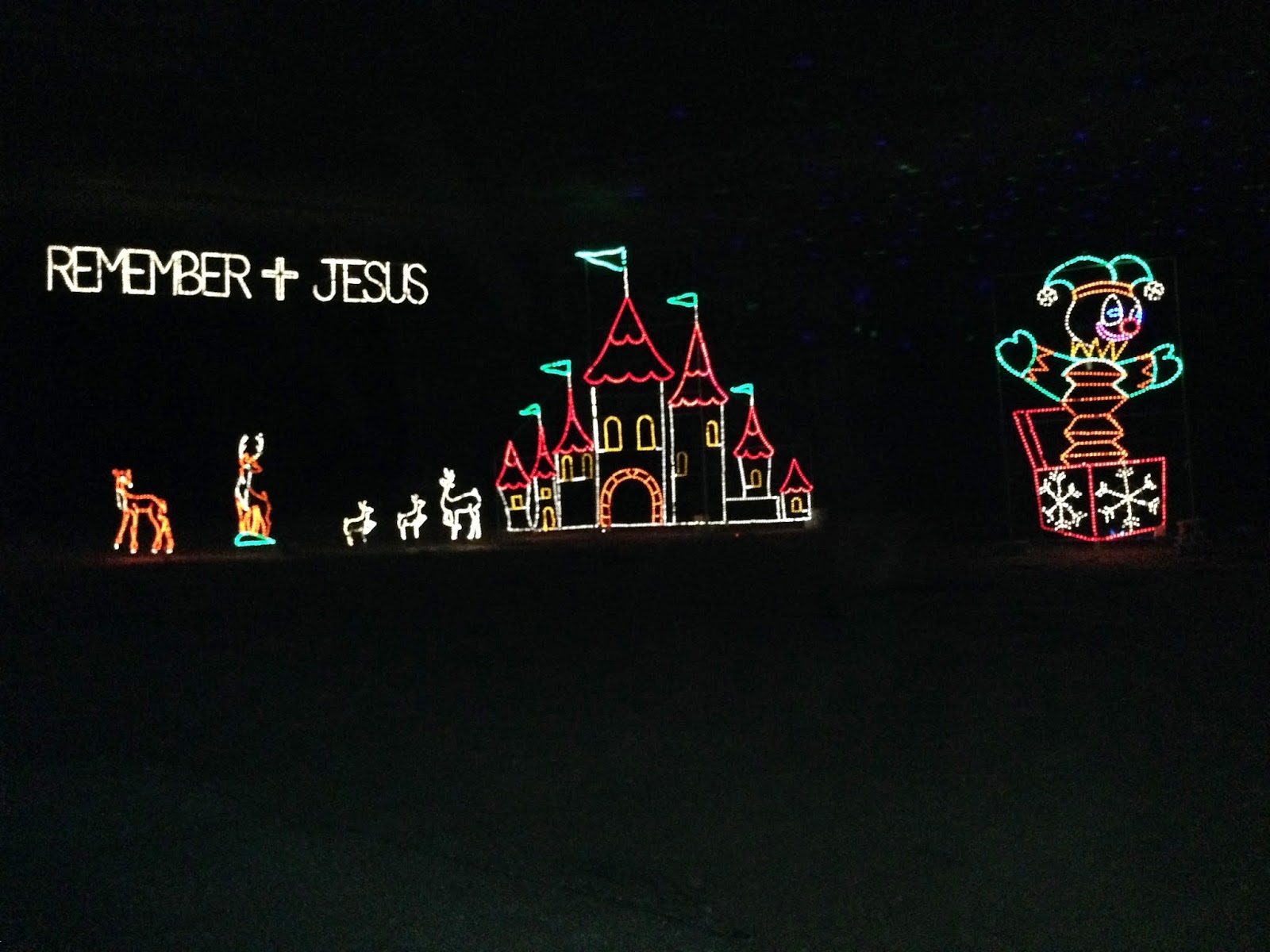 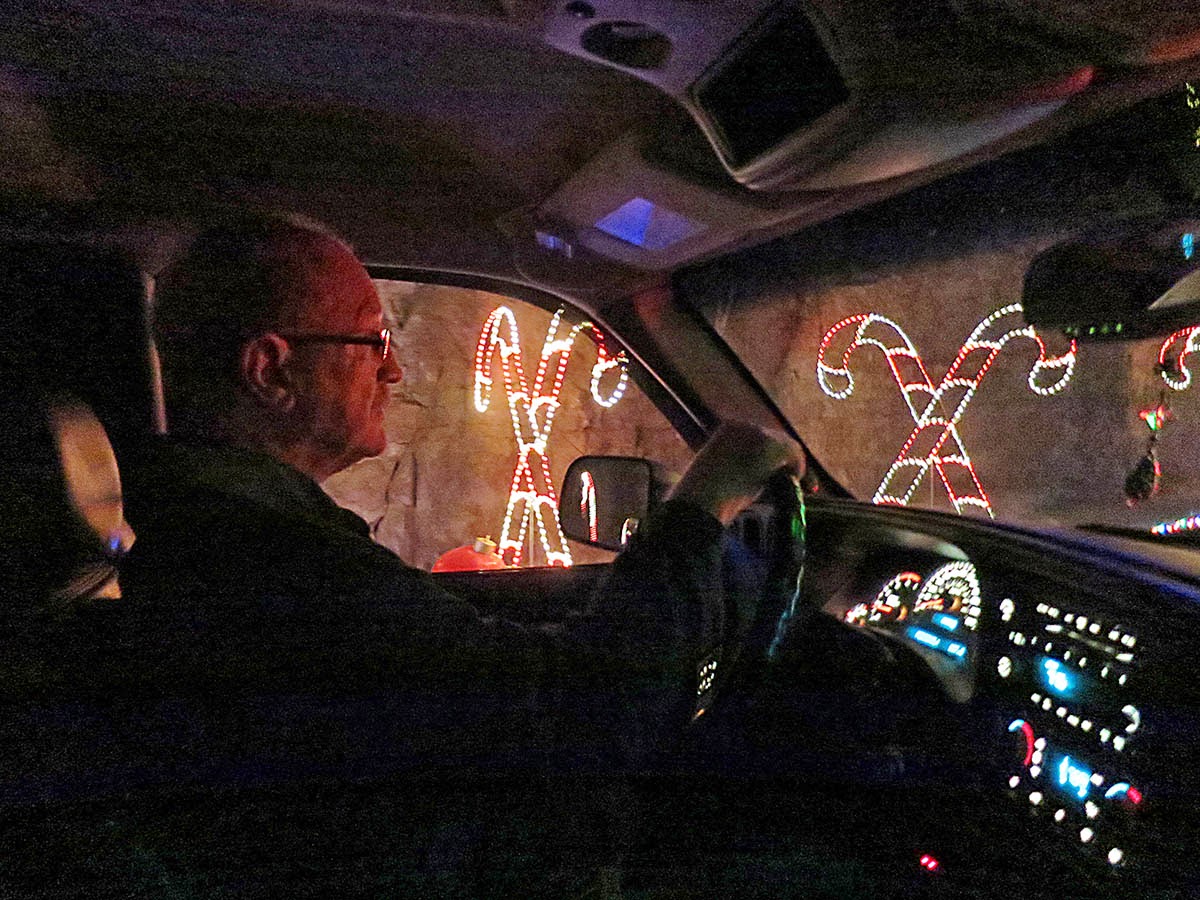 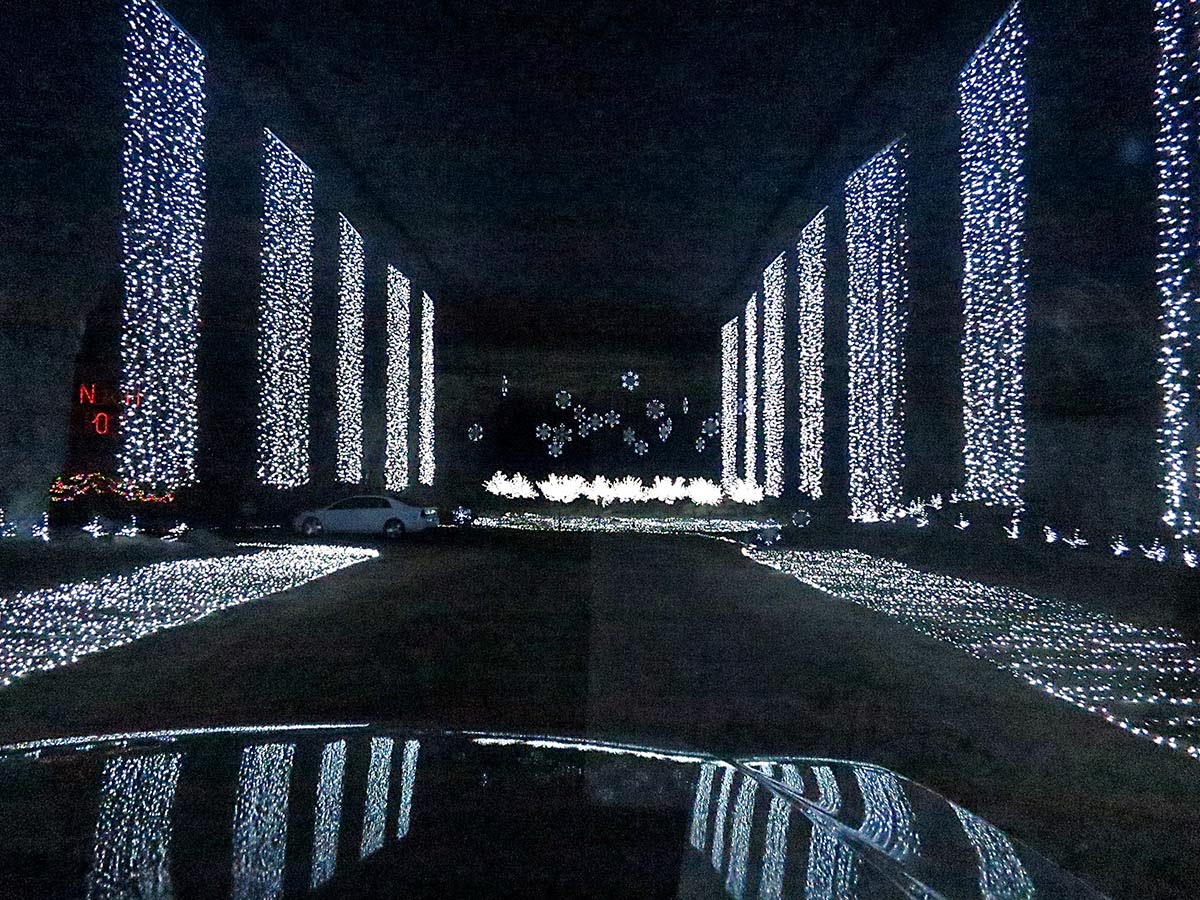 We also used one of our days off to visit Churchill Downs and Cave Hill Cemetery.  Churchill Downs is home of the Kentucky Derby which we learned on our tour is the longest, continuous running sporting event in the U.S.  It has run on the first Saturday of May for 140 years without a miss - pretty amazing! 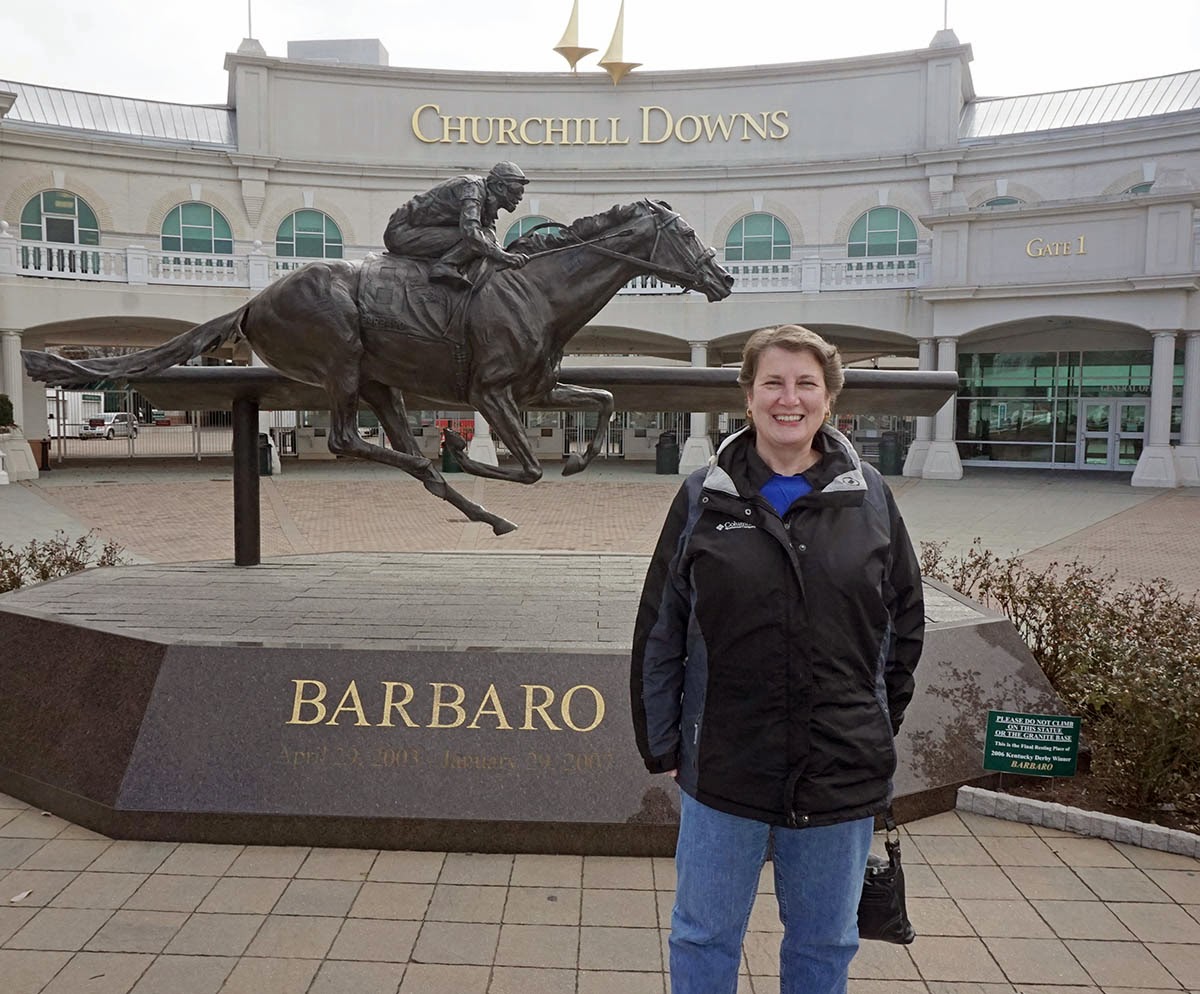 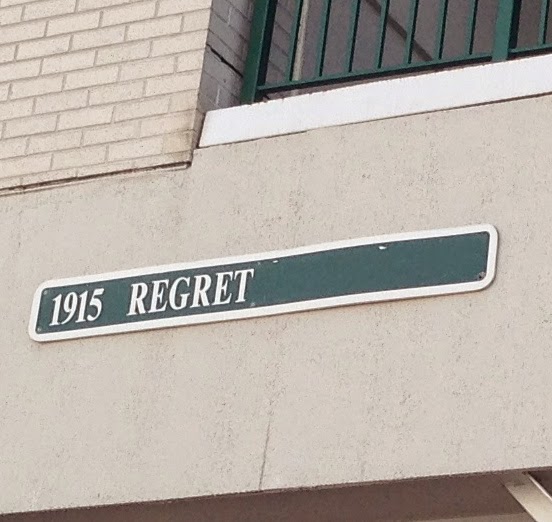 There are plaques on buildings throughout Churchill Downs listing each year and the horse who won. In 1915 a filly named Regret won; she was named Regret because her owner wanted a stallion.   I'm sure he was happy with having a filly after she won.  In the 140 year history of the Derby only three fillies have won. After we left Churchill Downs we drove over to Cave Hill Cemetery.  Colonel Sanders of KFC fame is buried here and was my original reason for going. It turns out that this is a pretty impressive place to be buried.  There are 20 miles of roads within the cemetery and many interesting people interred here including magician, Harry Collins and Patty Hill, the kindergarten teacher who wrote "Happy Birthday".  There are many unique headstones and we enjoyed driving through.
Here's a link, if you'd like to read more.
http://www.cavehillcemetery.com/ 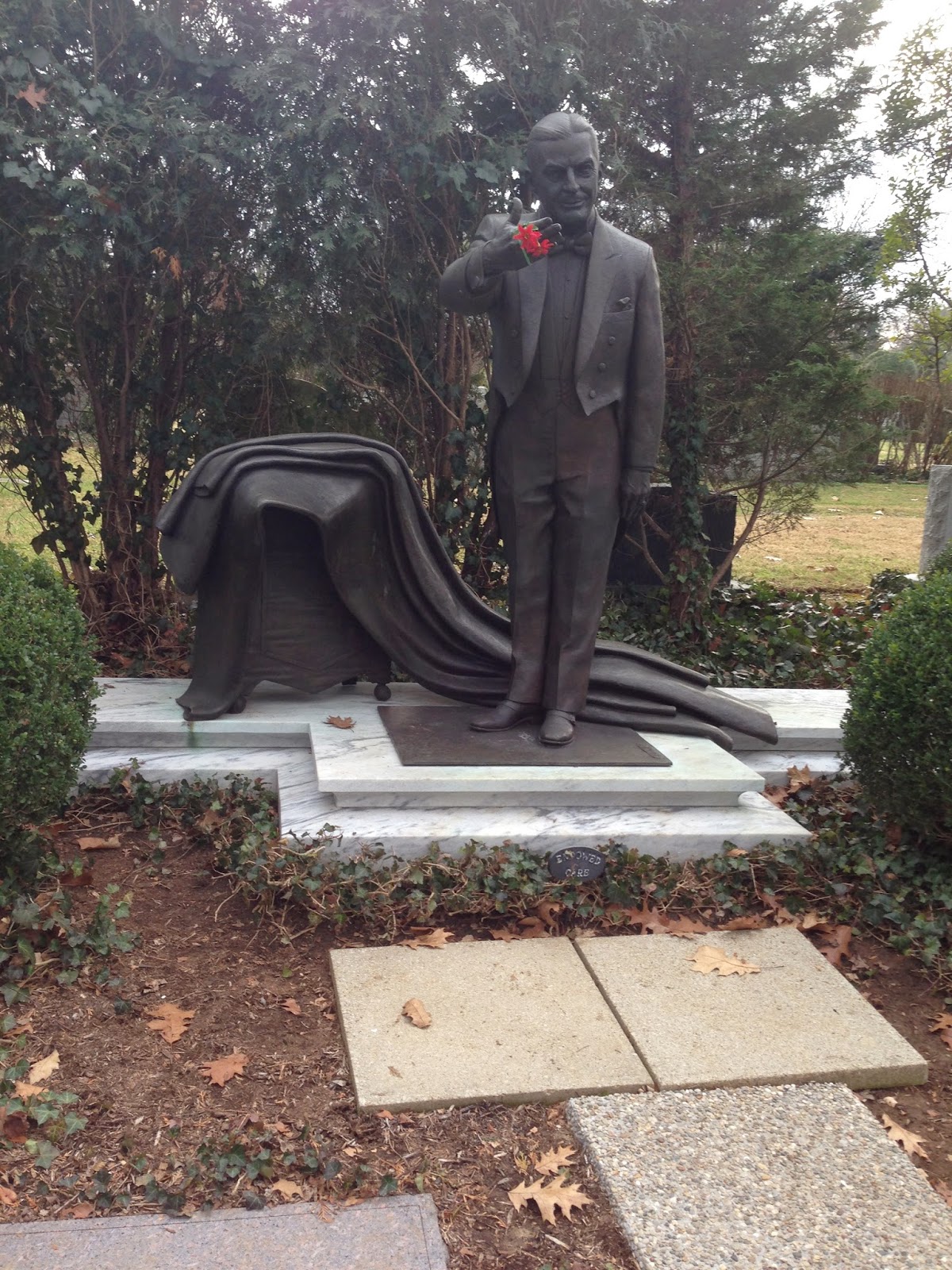 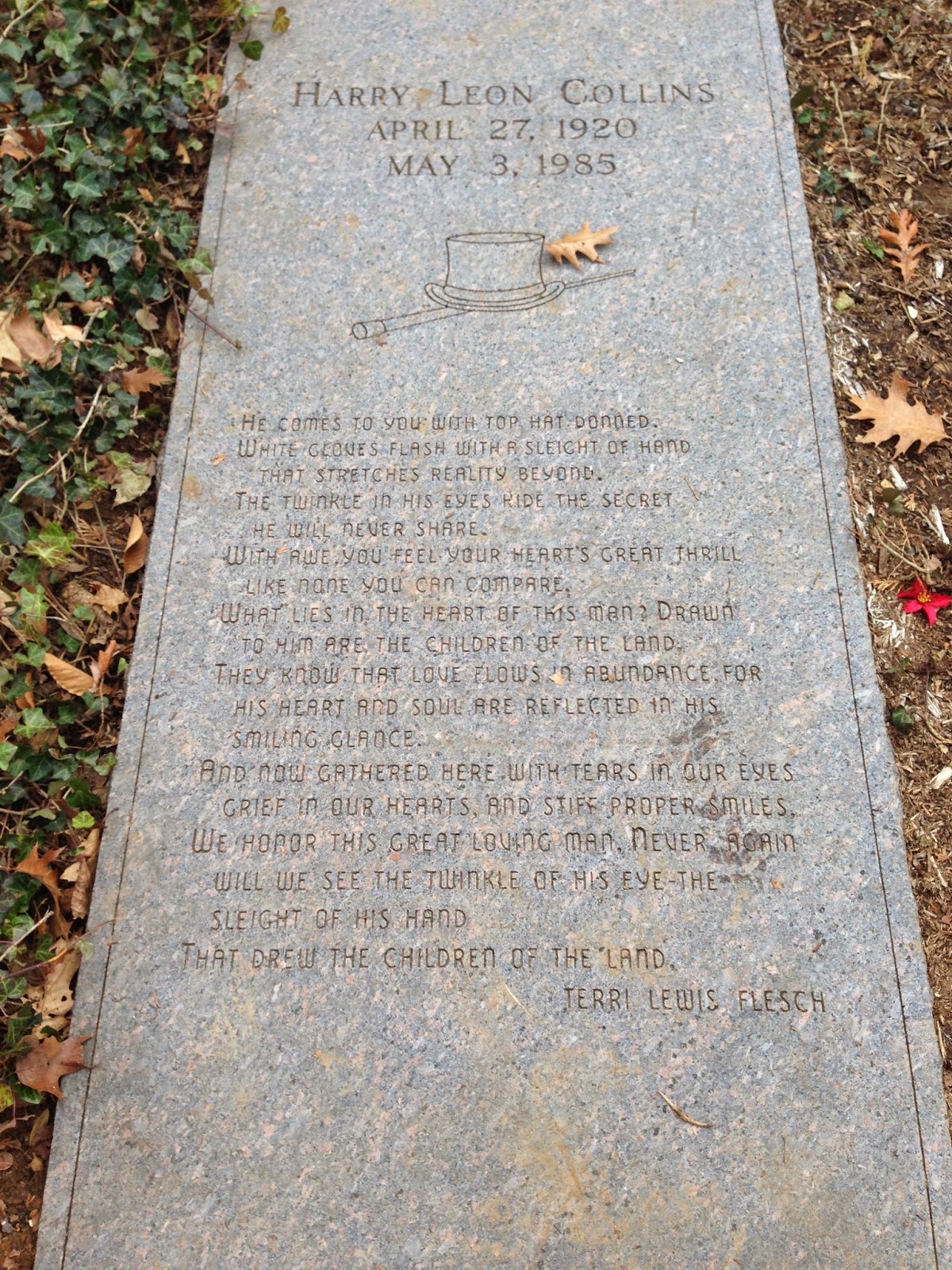 That was it for our sightseeing in Louisville.  Working really took up all our time, when we were off we also needed to do the mundane things like grocery and laundry.  It was well worth our time to work at Amazon but, at this time, we feel that once was enough.

Back on the Road

We were "released" (their words) from Amazon on Saturday, 12/20 and we hit the road west towards
Mesa the very next day with one planned stop in Arnold, Missouri to visit our niece Katie and her husband Paul.  About 30 miles after we left Indiana we noticed the air pressure in one of our trailer tires had a fast leak (thank goodness we have a tire monitoring system).  We pulled over in an Arby's parking lot and called our roadside assistance company, Easy Care.  They told us it would take 90 minutes to two hours before someone could get to us.  Marty decided that if we could get the rig up on the stabilizer he would be able to change the tire himself and HE DID IT!

The flat tire did delay us about 2 hours (we did have to eat at Arby's after all) and by the time we got to our stop for the night - St. Francois State Park in Bonne Terre, MO it was dusk and misting.  We were the only ones in the park, that was kind of creepy with the mist and all.

We drove into Arnold to see Katie but stopped at a tire store first to get our tire fixed.  After dropping it off we had a nice time visiting with Katie who is pregnant with their first child.  We picked up our tire and then drove with Katie to meet Paul for dinner at a nice restaurant in the Old Italy section of St. Louis.   It was so nice to see Katie and Paul and her baby bump :), can't wait to see what they have, I'm hoping she has a girl.

We left our creepy campsite on Tuesday morning and headed west.  We had no idea how far we would be going or where we would be staying but we made it to Tulsa and found a decent campground right off I-40.  It was a combination of campground and permanent trailers and suited our needs for one night.

Again, on Wednesday, we had no idea where we would end up.  We made it to Amarillo, Texas and stayed in another campground right off I-40.  This one was a step up from the one in Tulsa but, again, we only needed it for one night so it didn't matter.  We arrived in Amarillo around 3:00 so we had some time for a little exploring and decided to visit the Cadillac Ranch at sunset. 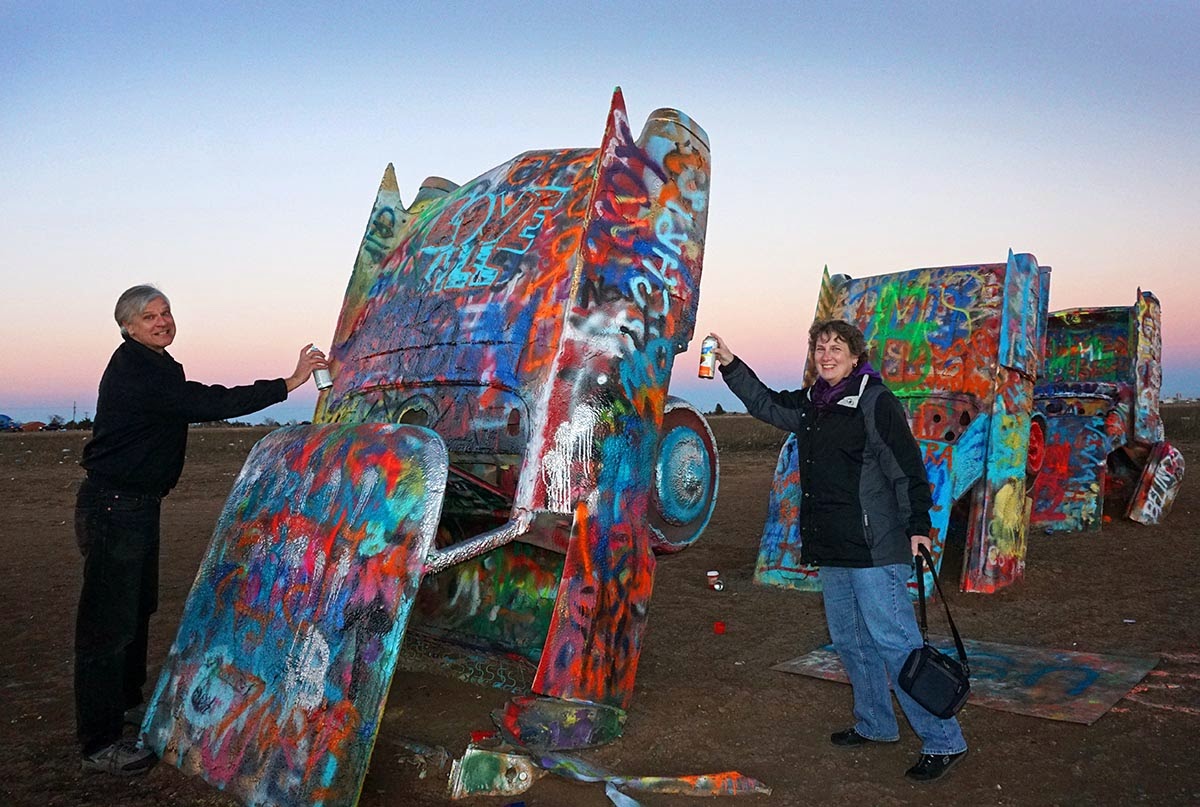 The Cadillac Ranch is just west of Amarillo and right off I-40.  There are about 6-8 cadillacs planted in the ground and covered by graffitti.  It's a strange sight in the middle of nowhere and it was amazing to see the steady stream of people visiting with their cans of spray paint (especially considering this was Christmas Eve).  One woman I talked to was driving with her daughter from Delaware to Camp Pendleton in San Diego where her daughter was reporting for duty.  They stopped at Home Depot for their can of spray paint and passed it on to us when they left.  We had some fun with it and then passed it on to a family with a bunch of kids.

We were thinking about spending Christmas Day at Palo Duro State Park which is about 20 miles south of Amarillo.  The weather was looking a little dicy for Friday so we decided to skip the canyon and continue driving west.  We made it past Albuquerque and stayed at a small rv park at the Sky City Casino and Hotel.  We enjoyed a buffet dinner in the hotel and spent a small amount of time (and money) in the casino.  We were back in our rig by 8:00.  Marty took Maddie out a little later for her last walk of the night and it was SNOWING!

When we woke up on Friday the ground was snow covered but the streets looked ok and we definitely didn't want to be stuck there for the day so we headed out.   The RV GPS told us to take I-40 to Holbrook, Arizona and then take roads southwest into Mesa but when we looked at the atlas we weren't so sure that this would be wise.  Luckily before we left we walked over to the nearby gas station and met another couple driving with their Montana.   They were also headed to Mesa and were going the way our GPS wanted us to go.  The man assured us that they had done it many times and we'd be fine and it was a much shorter way than taking I-40 to I-17 so we crossed our fingers and decided to try it.

Once we got on I-40 we again were second guessing our decision.  The road west into Arizona was snow and ice-covered and we saw two rv's lying on their sides plus two cars in ditches and one overturned semi - YIKES!  Marty drove very slow and easy and we made it into Arizona where we stopped at the welcome center.
Once we got out of the Arizona Welcome Center the roads amazingly cleared up and we went with the GPS directions.  The day was sunny and the roads were dry and we were in Mesa by 4:00 and all settled into our site at the Good Life RV Resort by 5:00.  We took a walk around the park and picked up some literature about the activities here - there are a lot of activities, old people sure know how to have fun.  We are not here just for fun, we will each be working 12 hours a week setting up tables and chairs for the various activities.   For this total of 24 hours a week we get our site with full hook-ups for free!  And,  when we're not working, we are able to use all the facilities and join in any activity that interests us.  Pretty sweet deal.

On Saturday we had visitors - Sue and Earl, Jeanne and Roseanne stopped by.  Joe and Jim were golfing so we'll catch up with them later.  They are all on vacation in Scottsdale until next Wednesday (12/31). We gave them a tour of the park and some of the amenities, went to get something to eat and visited the Spring Training Headquarters of our favorite baseball team.


We took it easy on Sunday, walked around the park and met a few of our fellow workkampers.  We meet our new boss, Leighann, tomorrow and start working on New Year's Eve.

See you next year!


Posted by Unknown No comments: