We loved Miami (except for the traffic)!  From the beach to the ballpark (with family) to the Everglades we had a great month.

We stayed at the Larry and Penny Thompson Memorial Park which is a South Dade County campground and it was very reasonably priced, especially for Florida.  It's just about impossible to find any campground in Florida for the winter unless you book a year ahead.  And most are very expensive especially compared to our usual winter destination of Arizona.  We were very lucky to find a spot and for $600.00 for the month including electricity it's one of the best deals we've found since we started our travels.  We never expected to be this far south in Florida this winter but once I saw the Cubs schedule and realized they were opening their season in Miami it was a no-brainer.  I'll follow them anywhere and Marty is happy to come along (right, Marty?)

This is a nice campground with some very nice walking trails and a swimming pool.  The land was originally a fruit orchard and there are still many fruit trees along the trail (no picking allowed).  The park is laid out in 11 pods (9 pods with 15 sites and 2 with 20 sites).  Many of the people who come here in the winter have been coming for years and stay in the same pod so each pod is like a little community with pot-lucks and outings. There is also a large building (Cabana) next to the pool and once a week they have an ice cream social.  Staying here is a cross between a state park with lots of hiking and a private park with social activities.  The "snowbirds" start leaving in March which is why we were lucky enough to get a spot (we came down on 3/15). 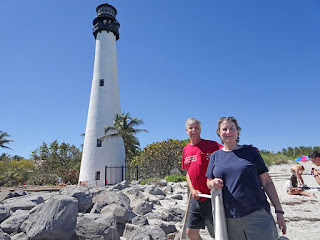 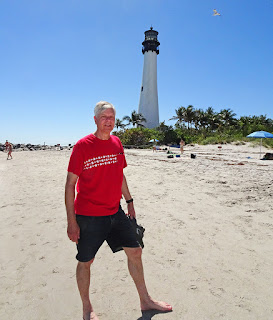 When we arrived in Miami the weather was perfect - sunny and mid 70's!  On our first full day (Friday, 3/16) we took a drive over to Key Biscayne to visit Bill Baggs Cape Florida State Park.  It was lovely!  We walked along the seawall and then climbed the 109 steps to the top of the lighthouse and then checked out the beach.  Considering it was Spring Break the beach wasn't too crowded.  After leaving the beach we drove to Costco and discovered the very worst thing about Miami - THE TRAFFIC!  Floridians like to blame all the tourists and snowbirds  for their bad traffic and bad drivers but we were down here after most of them left and it never got any better.  Lane changes without turn signals were the norm - very aggravating.  It's a good thing we're retired and are never in a hurry.


The couple in the site next to us (Ken and Rosanna from Ontario) were extremely friendly and gave us lots of ideas of things to do in the area.  On Sunday (3/18) they had us follow them to the Miami Flea Market and gave us some tips on how best to navigate it.  We walked around for a couple hours, bought a few things (mangos and orange t-shirts) and headed back to our rig.

Later that week, we took a drive south to Key Largo and stopped at John Pennecamp State Park.  We are having visitors (Yay!) next week and are looking for places to take them.  When we got back in the car we drove a little bit further south in the Keys to an Elks Club that has 10 RV sites right on the Gulf!  We were thinking about leaving Miami a few days early and staying here a couple days.  Decided not to but it was very tempting.

Saturday, 3/24, was "March for Our Lives" and we were proud to be able to march with the Parkland Community.  And now I'm getting on my soapbox:  The NRA puts out so much misinformation and too many people believe that their guns are in danger of being taken away.  If you have no mental health issues, have never been convicted of a crime and are licensed and trained and feel you need a gun to protect yourself and your family go for it.    Just please keep it in a safe place and away from young people.   We have been on the road for almost five years and have never felt that our lives were in danger.  The people we meet in our travels are friendly and kind as are the majority of people in our great country and I'm so tired of all the negative news that is put out just to scare us. STOP IT!

Below is a list of what March For Our Lives is all about (nothing radical, just common sense laws).


Guns are a huge problem in our country and something needs to be done.  I just recently found out that the NRA is a non-profit (501C 4) organization which makes no sense to me.  Organizations like Moms Demand Action which are all about educating people and fighting for common sense gun laws don't get the tax break. 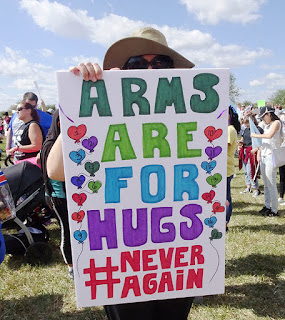 VISITORS!
On Sunday, 3/26 (Happy 30th Anniversary to us!) Sue, Earl, Sarah Beth and Megan drove down from the Chicago area to spend spring break with us.  The girls stayed with us and Sue and Earl stayed at a nearby Quality Inn which turned out to be the "No" Quality Inn, it was disgusting!  They ended up moving over to a LaQuinta which was even a little closer to us.

Monday (3/27) was beach day.  We drove back to Bill Baggs Cape Florida State Park and set up our chairs and beach umbrellas and enjoyed the day.

On Tuesday, 3/28, we drove to the central part of the Everglades.  We had planned on taking their tram tour but when we got there people were parking outside the park because the parking lot was full.  We decided to drive a little further west on HWY 41 and check out the Big Cypress Visitor Center.  It would have been nice to take the 2 hour ranger guided tram tour but there were plenty of alligators to see outside the Visitor Center and a short movie inside so our visitors had their "Everglades" taste.

Wednesday (3/29) was "hang around the pool" day.  It was pretty hot so the girls were very happy to go swimming and sunning. 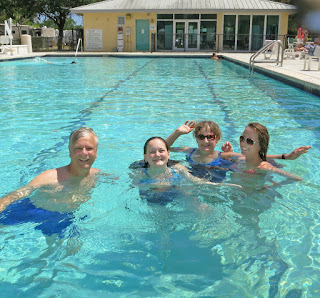 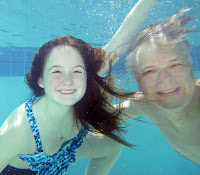 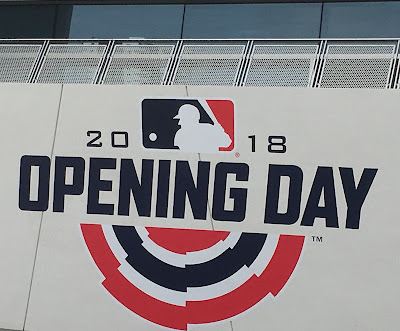 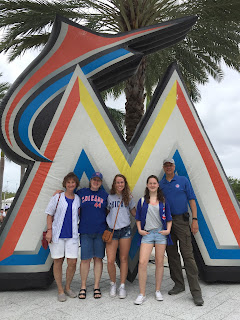 Ahhhh, Thursday.  Cubs opened their season in Miami (you didn't really think they came down from Chicago just to see us, did you?)  We had great seats, the Cubs won and we have very high hopes for the rest of the season. The ballpark was filled with Cubbie Blue - there were at least as many Cub fans as Marlin fans.  As I'm writing this on 4/14 the Cubs have been struggling and are just at .500 but they just had an incredible comeback in a game they were losing 10-2.  They WON 14-10!!  Go Cubs! 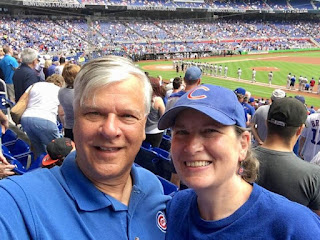 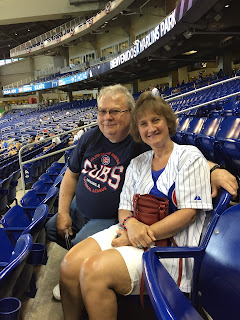 Our visitors left us early Friday morning (4:30!) for their 22 hour drive back to Chicago.  My crazy brother-in-law does all the driving and on the way down put in a 17 hour day!  I think if I was driving 22 hours I might split it a little more evenly but, hey, that's just me.  Once they left, we went back to sleep and had a very lazy day.

Full time Rving isn't all play. We didn't make it to the dentist when we were last in Chicago so we found one in Miami with a "new patient" rate of $59.00 for cleaning, x-ray and exam.  They were very thorough and even re-glued Marty's crown which had been bothering him and fell out during the cleaning.  I was talking to one of the technicians (Yulietta) who was pregnant and asked if she knew what she was having.  She knew that she was having a girl but was waiting for one of her co-workers to get back from vacation before telling the staff.  She tried to tell me she was having a "gender-reveal" pinata to make the announcement but wasn't sure how to say it in English so she asked one of the other girls.  Poor Yulietta accidentally told me that it would be filled with pink items and was so upset with herself because she thought the other girl heard her.  I was sure she hadn't noticed but it was pretty funny how easy the slip was.

We asked the dental staff for a recommendation for a good Cuban restaurant and they suggested the nearby LaCarretta.  When we got there at 3:30 the parking lot was pretty full which is always a good sign.  The food was just ok but the Mango Mojito was pretty tasty.

We've spent some time shopping thrift stores and estate sales.  We are going to a wedding later in the month and don't travel with "wedding-worthy" clothes.  We both did pretty well, I found a brand new dress and Marty found a nice jacket, tie and shoes.  I'm still looking for shoes but we still have a few weeks.

We had two more tourist days.  The first was on Tuesday, 4/10.  We drove north to Hugh Taylor Birch State Park in Ft. Lauderdale.  It was very hot and muggy but we still hiked the 1.5 mile trail - yay for us!  Then a quick peak in their visitor center and a walk across the street to the beach - Do you know what movie this beach was a major part of?

Our next and final tourist day was on Friday, April 13th.  We drove to the south part of the Everglades. We stopped at the Edward Coe Visitor Center and watched a movie about the Everglades.  Did you know it's not a swamp?  I learn something knew at every National Park we stop at.

Did you know that there's a missile site in the Everglades? From their brochure "Everglades National Park houses one of the best preserved relics of the Cold War in Florida.  A historic Nike Hercules Missile Base, dubbed HM-69 remains virtually the same as it was when official use of the site was terminated in 1979."

There was an open house at the Missile Site so we stopped and checked it out.  It was very interesting learning about this time in our history and seeing an actual (deactivated) missile. 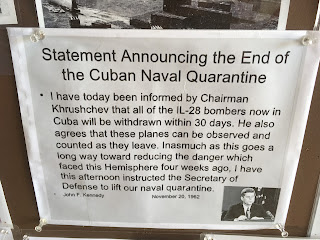 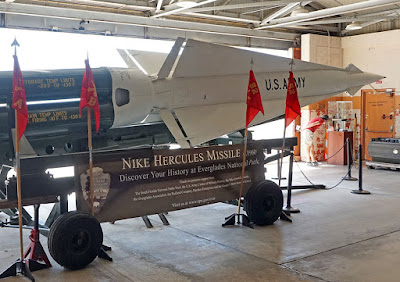 Here's a quote from John F. Kennedy which was printed on the brochure we received:

"It is insane that two men, sitting on opposite sides of the world, should be able to decide to bring an end to civilization" (10/27/1962)

From the missile site we drove all the way to the bottom of Mainland Florida to the Flamingo Visitor Center.  They sustained quite a bit of damage during Hurricane Irma and haven't fully recovered but we did get to walk along the waters of Florida Bay (we even saw a manatee!).  We checked out the campground which at this time of year was pretty empty.  Some sites had electric so who knows, maybe someday we'll be back.


That's it for our month in Miami.  We are now heading north to Maine for the summer with a stop in Mobile, Alabama for a family wedding.


Posted by Unknown No comments: