Another month has gone by and once again I've procrastinated so that you now have another long post to read - sorry!

We are still in Forks working at the Timber Museum and are spending as much of our off time as possible exploring the area. We need to be ready to be tour guides for our FOUR sets of visitors coming soon.

Even though we are in one of the rainiest/grayest spots in the United States we've only been rained on a few times.  Unfortunately one of those times was on Memorial Day when we decided to take the 1 1/2 mile hike to Third Beach in LaPush (home of Jacob Black!).  I was nervous about doing this trail because most of the trails we've done have been hilly and my knees do not like hills!  The hike to the beach was surprisingly easy since we were mostly going downhill which meant, of course, the hike out was uphill - oh, well.  It actually wasn't bad and we look forward to going back on a drier day.  We never actually walked on the beach since there were giant logs to cross over and crossing/sliding over wet logs didn't sound like fun (at least not to me!).


Thursday, June 4th
We don't normally work on Thursday but this day was special - The Forks Kindergarteners were coming to visit the museum!  There were between 80-90 kids broken into groups of 20-25 at a time.  Each group visited us, walked the trail behind us and also visited the Olympic National Resource Center (which is up the steep trail at the end of our parking lot).  It was tiring but so much fun - I really miss little kids! 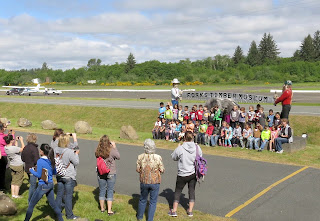 Wednesday, June 27th
Since we are volunteering at the Forks Timber Museum, it's important that we know something about logging.  The Forks Chamber of Commerce offers a "Logging & Mill Tour" every Wednesday morning and we signed up for the first one of the season on May 27th.  The tours are free and the guides are very informative retired loggers.  We visited Allen Mill and watched logs being milled and then we hopped back in the van for a ride to a logging site.  After a bumpy drive up and down a gravel road we arrived at a locked gate - not a good sign.  We continued our drive but there was no logging going on due to a machinery breakdown and the loggers had all been sent home.  So, instead of seeing loggers in action, we drove to see the Duncan Memorial Cedar Tree. We posted a picture of the Duncan Cedar Tree in our last post.

Friday, May 29th
Another day off was spent hiking to Sol Duc Falls.  Sol Duc is part of the Olympic Peninsula National Park and has some very nice trails including a one mile hike to a beautiful waterfall.  There are also hot springs there and a nice lodge, we will be back to visit those with our July visitors (right, Sue?) 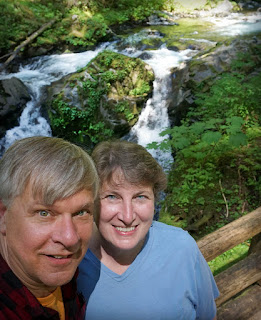 Friday, June 5th
We also visited Marymere Falls (there are many, many waterfalls in Washington).  It was an easy hike with a steep stairway at the end to view the falls.  We somehow ended up tagging along with a hiking club of senior citizens from Northern California, we even "photo-bombed" their group photo.


Marty has been doing some interesting photography.  This photo, "Mossman" is a moss covered tree stump from our hike at Marymere Falls.  It was created by combining  two symmetrical images flopping one half to produce this anthropomorphic design

Thursday, June 11
Our next adventure day was spent at Hurricane Ridge.  We stopped at the Visitor Center, bought lunch at their cafe and took it outside to enjoy the view.  What a beautiful place!  We had perfect weather for hiking and decided to try the Hurricane Hill Trail.  It was 1 1/2 miles long (no problem) with about a 700' elevation gain (problem).  We made it to the top (after many breaks by me) and enjoyed the view of the Straits of Juan de Fuca with Canada in the background.

When we reached the end of the trail there was another slight hill to climb which there was no way I was going to climb - I was done!  I started talking to a couple and found out they were from Chicago, we were having a nice chat when, all of a sudden, a mountain goat appeared.  This ended our chat as the woman starting telling me about an incident where a man was killed by a mountain goat in this area.  Another nearby woman piped in that she knew the man who was killed.  OK, that slight hill doesn't look so bad anymore and we climbed it to avoid the mountain goat.  The Chicago woman was very nervous and went back down the trail without really enjoying the view.  Where was Marty during all this discussion about killer mountain goats?  I'm sure you can guess.


Saturday, June 13th
Our next adventure was hiking near Lake Ozette.  The original plan was to hike the Cape Alava Trail to the ocean and hike back the same way (6 miles round trip).  Since this trail was pretty easy, once we got to the ocean we decided we could hike the 3 mile beach trail to the Sand Point Trail for a total of over 9 miles. What were we thinking!  Washington beaches are hard to hike on - they have boulders to climb over and giant logs to crawl under and soft sand to deal with.  The Cape Alava Trail and the Sand Point Trail were both worth doing but we won't do BOTH of them together again.  The Sand Point Trail had a nice beach so we will probably head back there when Sue and Sarah are here. 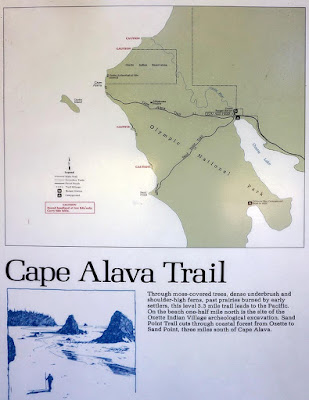 Most of our sight-seeing has been done north of Forks.  We decided to venture in the other direction and head south to Lake Quinault, the Southern gateway of Olympic National Park.  They have many trails which connect so that you can hike as much or as little as you'd like.  We did four miles and the last mile took us to the shore of Lake Quinault and to the Lake Quinault Lodge.


On Thursday, June 25th we had our first Chicago visitors!  My friend, Mary Jane, along with her sister-in-law and niece drove over from Seattle to visit us.  That's not a quick easy drive, it's at least 3 1/2 hours!  Lucky for me that Mary Jane loves to drive.  They wanted to visit the rain forest so after lunch we drove down to the Hoh and walked around a little.  Then they dropped me off and drove back to Seattle! It was wonderful to see her and catch up!!
That's it for this post, my sister Sue and her granddaughter Sarah are leaving Chicago on Saturday (6/27) around 2:00 P.M. on Amtrak and will arrive in Seattle on Monday (6/29) around 10:30 A.M.  There will be lots more to report in the next post and perhaps I can even convince Sarah to do a guest post on her train trip (I'm so jealous!).

Posted by Unknown No comments: