Palo Duro Canyon State Park is about 20 miles south of Amarillo, Texas and was our next stop after leaving Lubbock.  We paid for two nights and then decided that we needed two more nights - it was an amazing park.  Palo Duron Canyon is the second largest canyon in the United States and while it's not as "Grand" as the other one it's still a beautiful place to camp and definitely not as crowded.   Driving down into the canyon with the rig was a little nerve-wracking but once we got down there it was well worth it.  We pretty much had the campground to ourselves which is always nice.  We had perfect weather for all four days and hiked on three of those days. Our longest hike was 3.2 miles to Lighthouse Point which would have been fine but once you get to the 3.2 mile point you have to climb to the Point.  Marty did the climb and I waited at the picnic table and met lots of nice people.


We took a ride into Amarillo and discovered the Jack Sisemore Traveland RV Musuem.  It's close to I-40 and worth a stop if you're in the area.  It's in a RV center, you just tell them you want to visit the museum and they walk you back there.  It's free and you get to go inside lots of very cool vintage RV's - what could be more fun?

Welcome to the Jack Sisemore Traveland RV Museum. The Sisemore’s began restoring and collecting unusual vintage RV’s over 25 years ago. They have built a museum that houses many of the RV’s in their collection. These include the Flxible Bus from the Movie RV, the 1st Itasca motor home ever built. The oldest Fleetwood in existence and many other RV’s from the 30’s, 40’s, 50’s, 60’s and 70’s. The museum is free to the public and is open Monday – Saturday 9-5. Step back in time, reminisce and enjoy the progression of the RV industry from its inception till now.


We left Palo Duro Canyon State Park and Texas on Monday, 2/21.  Next stop was Albuquerque, New Mexico where we spent four nights at another Elks Lodge (our third).  It was just your basic parking lot with an electric hook-up and water just a hose length away.
Marty was happy to be in Albuqurque because we were only a two-hour ride from the "Very Large Array".  Our drive took us about 50 miles west of Soccoro, NM to the middle of nowhere.   You are probably wondering what is the "Very Large Array" and since I really don't quite understand it, here's the link to their web site.  The one thing I did understand is that this was the location from the movie "Contact" with Jodie Foster and it was the spot where she first observed intelligence from far away galaxies.
https://public.nrao.edu/radioastronomy/what-is-radio-astronomy 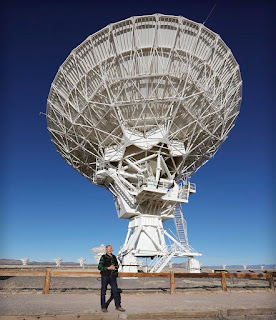 On our last full day in New Mexico we took a drive up I-25 to Santa Fe.  What a neat city!  This may be my favorite city that we've visited so far and we definitely need to spend more time here. Lots of history and lots of shops.  Our first stop was the Loretto Chapel, home of the Miracle Staircase.  The Chapel no longer holds services (it's been decommisioned or whatever they do to make it into a tourist attraction).

Here's the link to the story:
http://www.lorettochapel.com/staircase.html 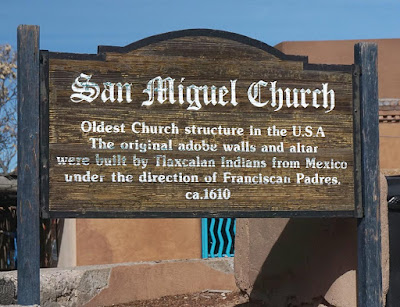 We said goodbye to Albuqurque on Friday, 2/26 and continued our westward trek.  Holbrook, Arizona was our next stop and again we spent four nights.  We have a space in Mesa for the month of March so it's been nice to taking our time getting there.

Holbrook, Arizona is right on Route 66 (or what's left of it) and is also an easy drive to the Petrified Forest National Park  and Painted Desert National Park.  We visited both parks and have the photos to prove it.

We had one last spot to visit,  Winslow Arizona which is on Route 66.   It's amazing how many people stop at the corner to take their picture (including us).
Route 66 is probably the most well known highway in the United States.   This highway, which became one of the most famous roads in America, originally ran from Chicago, Illiois through Missouri, Kansas, Oklahoma, Texas, New Mexico, and Arizona before ending in Santa Monica California, covering a total of 2,448 mile. US 66 underwent many improvements and realignments over its lifetime, and it was officially removed from the United States Highway System on June 27, 1985, after it had been replaced in its entirety by segments of the Interstate Highway System (thanks Wikipedia). We love to travel on Route 66 and are hoping to drive to Santa Monica this April. 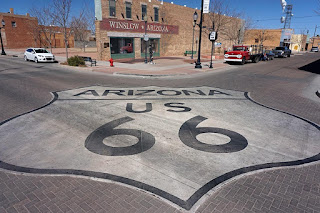 Even though we've already spent two weeks in Mesa I'm ending this post here.  Mesa in March deserves it's own post - one whole month of sunshine and warm temperatures before heading back to Washington for the summer.  See you later!