Our first week in Florida was busy with family, we relaxed the next three weeks and then finished up our Florida trip with some final sightseeing. 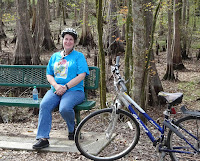 We carry our bikes with us but haven't used them as much as we thought we would. Florida is probably one of the flattest states and it has lots of nice bicycle trails so no more excuses it was time to check out a trail.  The Withlacoochee Trail was a short drive away and on Monday (1/25) we put the bikes in the truck and headed over.  This trail is a rail-trail (converted from railroad tracks).  The total length is 46 miles and it passes through small towns, ranches and natural areas.  We ended up riding 23 miles round trip, it was a perfect day for riding - 70's with a little cloud cover.


Since our trip to the Apple Store in Tampa was unsuccessful we decided to visit one in the nearby town of Brandon on Thursday (1/28).  We also signed up for some classes (Mac Basics and IPhone Basics).  Apple Stores are wonderful places and even though neither of us really needed the basic classes you always learn something new.  They also looked at my IPad and told us it was beyond repair :(.  We weren't surprised and went ahead and bought a new one.  Apple sure gets a lot of our money.

We were at the Apple Store from 10:00 AM until about 3:30 PM - a loooooong time!  Once we left we drove over to Clearwater for a last visit with Aunt Arlene and Uncle Al.  We don't know when we'll visit Florida again so it was nice to sneak in another visit. 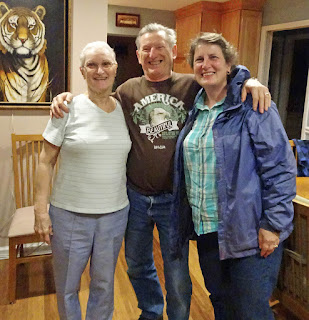 There is a Kumquat Fest every year in Dade City Florida - who knew???  Of course we had to check it out.  There were kumquat pies and kumquat ice cream and a craft fair and live music.  We had a good time and I even bought a few little crafty items (when the Cubs are back in the playoffs I'll definitely be ready!)

We left Florida a day earlier than planned because it looked like it was going to rain on our scheduled  arrival date for Louisiana. It's no fun to set up camp while it's raining.  Since it was 600 miles to our next stop we drove about half-way and spent the night in the WalMart parking lot in DeFuniak Springs, FL (on the panhandle).  We got an early start the next morning and were in Mandeveille, Louisiana around 3:00 (2/1).  The park we stayed at was Fountainbleau State Park and it's one of the nicest parks we've stayed at.  It's on the shores of Lake Ponchatrain and you can see the lights of New Orleans from the beach.  Since it was Mardi Gras we were lucky to get one of the last sites (right next to the dump station).  There are some nice hiking trails and a really nice bike trail (which we didn't do - it just gives us an excuse to come back).

Of course the best part of being in Mandeveille was visiting our niece Becky and her kids.  It was Mardi Gras time and I had no idea that it was such a constant party.  We never went into New Orleans (again, another excuse to come back) but we did stop by Ben's school for their parade.  We had a great time visiting the Winchell's!  And we really appreciated the use of their washing machine and internet - thanks Becky! 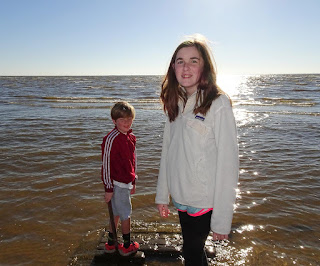 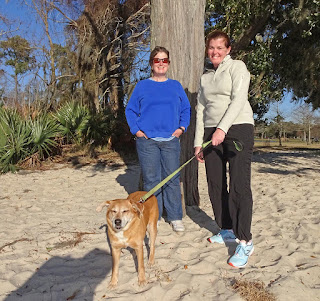 We left Mandeville on Wednesday (2/11) a little later than planned due to a nail in one of our truck tires.  Luckily the service department at Goodyear took care of us right away and we were on the road by 1:00.  The weather was perfect with not a cloud in the sky and we drove northwest to Vicksburg, Mississippi where we spent the night in a Walmart parking lot.  We were on the road by 7:30 Thursday and headed west on I-20 to Dallas, Texas.

We became members of the Elks Club last summer which means that we can stay at any of their lodges that have RV facilities.  Dallas Elks Club #71 has parking with 50 amp electric and water for $15.00 per night - hard to beat that price.  This was our first Elks stay and it's going to be hard to find a friendlier club.  Thursday night was Bingo, Friday night was Trivia and Saturday night was a dinner, a dance and Karaoke.  We played on a trivia team Friday and our team was ahead or tied for the first four rounds and then missed a Chicago Blackhawks question in the last round and lost by one point (I accept full responsibility - I didn't know Bobby Orr ever played for the Blackhawks).  We had a very good time and now have a new goal - play trivia in every state.  Karaoke on Saturday was tempting but we wanted to get an early start on Sunday and knew once we started singing (and drinking) it would be hard to leave.

While staying in Dallas we took a drive on Friday to the Fort Worth Stockyard Area.  No more stockyards just a lot of shops and saloons.  We visited the Fort Worth Museum and the director showed us outside where we could walk the catwalk over the old cattle pens.  From there it was just a short stroll to Billy Bob's Honky Tonk - the largest in Texas.  We paid $2.00 each to go in and now you don't have to, it wasn't worth it.  I'm sure it's way more fun in the evening with live music.


It's a must when you're in Dallas to visit the Book Depository where Lee Harvey Oswald shot President Kennedy.  It's now "The Sixth Floor Museum at Dealey Plaza".  It was very crowded  but well worth the visit even if only to look out the window where the shots were fired.  Back outside we walked over to the grassy knoll - the whole visit gave me the chills; such a sad moment in American history. 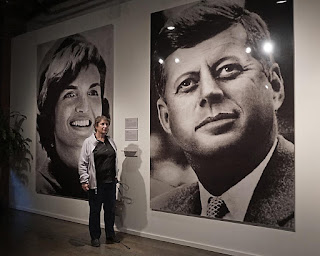 We left Dallas on Sunday (Happy Valentine's Day) and since we don't need to be in Mesa until March 1st we are going to take our time and stop at whatever strikes our fancy.  Lubbock, Texas seemed as good a place as any to spend a few days so here we are.  Again we are staying at an Elks Club - this one has 50 amp, water, and sewer connections (doesn't take much to make us happy).

We wanted to visit the Buddy Holly Museum on Monday but they were closed so we visited his gravesite instead.  We also went to Prairie Dog Town - fun, right?

The weather has been incredible - high 60's and sunny every day.  We planned to spend two nights but the reason we came to Lubbock was to visit the Buddy Holly Museum and since they were closed on Monday we stayed the extra day and saw the museum on Tuesday - well worth the wait.  We paid our admission fee as seniors (close enough) and then watched an eighteen minute movie.  After the movie, we got a tour of the home of Jerry Allison where Buddy Holly and the Crickets often practiced and where "That'll Be The Day" was written.  The house was moved from it's original location and is now next door to the museum. 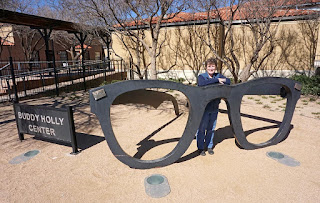 The Museum is small with all of it's artifacts and information in one large room.  It was very well done and informative and worth the price of admission (6.00 for seniors).  Unfortunately they don't allow photography.

That's it for Lubbock, we're leaving here Wednesday morning and, I can't believe I'm saying this, we are heading north.  Not too far north, just up to I-40 with a stop at Palo Duro Canyon. We still have almost two weeks to get to Mesa so we have some time to visit some areas in New Mexico and Arizona that we haven't been to yet.