February 15 thru March 15th - Two cities and a Swamp

While we were still in Brunswick, Georgia we took a ninety minute drive south to visit St. Augustine, Florida.  St. Augustine is the oldest city in the United States, it was founded in 1565 by the Spanish.  Our first stop was at the Visitors  Center for information and then it was a short walk over to the
Castillo de San Marcos - a 17th-century Spanish stone fortress with views of the St. Augustine Inlet. The Fort is a National Park and someone forgot her NPS passport so we had to walk back to the truck to get it.  That's ok, it just added to our step total for the day.

After picking up my passport we decided to walk through the tourist areas (lots of restaurants and stores) and eat lunch.  After lunch we continued our walk down the main drag with a stop at America's first Parish - Cathedral Basilica of St. Augustine which was founded on September 8, 1565.
====================
Our next stop was Flagler College which at one time was the Ponce de Leon Hotel built in 1888.  The college was founded in 1968.  What a beautiful place to go to school - the architecture and courtyard were amazing.

Here's a link to some information on Henry Flagler, he was a pretty interesting guy and is a very important person in the history of Florida.   http://biography.yourdictionary.com/henry-flagler

After leaving the college, we finally made it to the fort.  After getting my passport stamped (yay!)   we walked around the "ground floor" and peeked into all the rooms and then climbed the stairs to the top and checked out the lookout areas.

Here's some information from the National Park Service website regarding the fort:


The Castillo de San Marcos is unique in North American architecture. As the only extant 17th century military construction in the country and the oldest masonry fortress in the United States it is a prime example of the "bastion system" of fortification, the culmination of hundreds of years of military defense engineering.

It is also unique for the material used in its construction. The Castillo is one of only two fortifications in the world built out of a semi-rare form of limestone called coquina (The other is Fort Matanzas National Monument 14 miles south)

Given its light and porous nature, coquina would seem to be a poor choice of building material for a fort. However the Spanish had few other options; it was the only stone available on the northeast coast of La Florida. However, coquina's porosity turned out to have an unexpected benefit. Because of its conglomerate mixture coquina contains millions of microscopic air pockets making it compressible.
A cannon ball fired at more solid material, such as granite or brick would shatter the wall into flying shards, but cannon balls fired at the walls of the Castillo burrowed their way into the rock and stuck there, much like a bb would if fired into Styrofoam. So the thick coquina walls absorbed or deflected projectiles rather than yielding to them, providing a surprisingly long-lived fortress.


That was it for our day in St. Augustine.  It's a beautiful city with lots of history and if we're ever back in this area we'd definitely visit again (we never did find the Fountain of Youth).

We were scheduled to stay in Brunswick, Georgia for a full month but decided to leave a few days early to visit the Okefenokee Swamp (that's so much fun to say).  It was an easy 125 mile drive west and we were in the park by 2:00 on Sunday, February 25th.  We stayed at Steven C. Foster State Park which is in the middle of nowhere with no cell phone service or internet!  We did have limited cable television so we weren't totally cut off from civilization.

Steven C. Foster State Park is located within a National Wildlife Refuge and it's a 17 mile drive in from GA Hwy 177.  The campground is surrounded on three sides by the Okefenokee Swamp. We had a nice campsite in the woods with a fire ring so we finally got to have a campfire (and marshmallows!). There weren't a lot of hiking trails so we usually walked from our campsite to ranger station/store and back for steps.  Anywhere there is water there are alligators so sticking to the road worked just fine for me.


On our first full day at the park (Monday) we took a ranger guided boat ride thru the swamp.  It was great since we were the only ones on the boat and could ask all the questions we wanted and he even took us on a little detour when we asked "what's over there?".   We saw so many Alligators!!  It rained in the afternoon so it was good that we took the 10:00 a.m. tour. 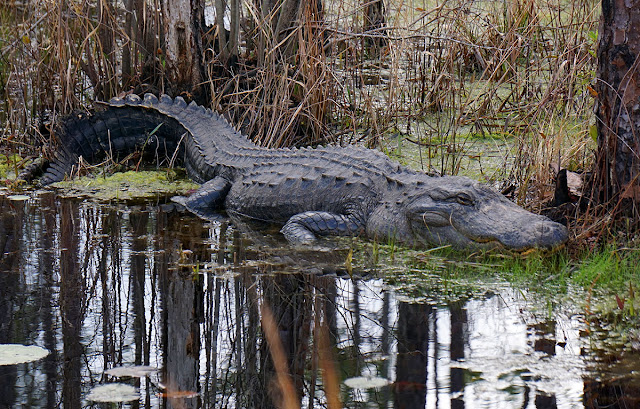 The highlight of our day on Tuesday was driving the 17 miles into the town of Fargo, GA and using their wi-fi to check emails and download podcasts.  We had forgotten to drop off something at our last campground and had to mail it back and the Post Office just happened to be next door to the gas station where there was wi-fi.  And since the Post Office didn't open until 12:15 and it was only 11:30 we got to sit in our car and download to our heart's content.  I noticed the guy in the car next to us was doing the same thing.

Wednesday was hot and muggy.  We did our morning walk to the office and in the afternoon we rode our bikes to the Suwanee Sill - the headwaters of the Suwanee River (can't get that darn song out of my head).  The ride was about 12 miles round trip on a nice flat road.  As we were riding along the road we saw a couple with a red pick up truck stopped at the side.  The man was trying to get the attention of a very large alligator on the other side of the sill (the sill was only about 20' wide).  This man had been fishing on the river and was attaching one of the fish he caught to his line and then trying to cast it over by the alligator.  Lucky for us his aim wasn't very good; the couple had a truck to get in if the gator started moving and all we had were our bicycles!

Steven C. Foster State Park was definitely one of the most interesting and beautiful parks we've stayed in; four nights was just right.  We've stayed in  three Georgia State Parks so far this year and we really enjoyed each of them.

We headed back into civilization on Thursday, March 1st.  Our reservations were at Sumter Oaks RV Park in Bushnell, Florida until March 15th.  We stayed here a couple of years ago and really liked it for it's location.  It's an Escapee Park and since we're members it's very affordable.

Our two weeks in Bushnell were pretty relaxing.  Marty noticed that my bike tire needed replacing and we remembered that there was a bike shop right off the bike trail in Floral City. We dropped it off on Friday and it was ready on Saturday.  When we went to pick it up we started talking to the man in the shop about recumbent bikes and he let us try a couple out.  He claimed that once you try one you'll never go back to a regular bike. They were fun to ride and super comfortable but  for $4200.00 each, we'll have to wait till we win the lotto to get ours. 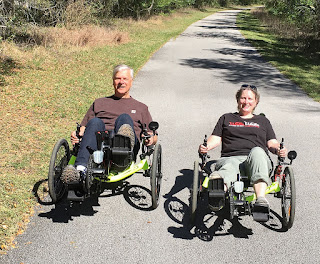 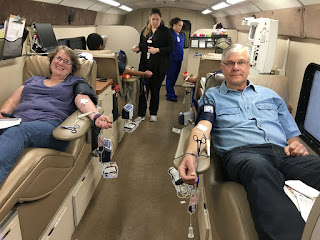 On Sunday we stopped in at Walmart for some shopping and noticed the Blood Mobile.  They were giving $10.00 gift cards with each blood donation so we figured what the heck.  Once we were inside the woman told us their supplies were low because of the Parkland School shooting which made us feel even better about donating. 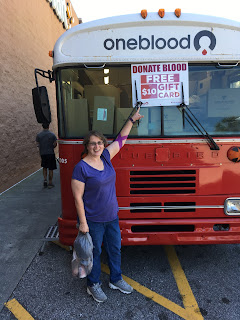 There is a flea market every Monday in Webster which is only one town over from ours.  We walked up and down almost every aisle, got lots of steps and even bought a few things.  This was a fun, old-fashioned kind of flea market - something for everyone and not a lot of video tapes and tube socks.


My sister Judy and her friend (and mine) Annie were sailing out of Port Canaveral on a short cruise Wednesday morning.  Since they were flying into Orlando on Tuesday which was about 1 1/2 hours away from us we decided to meet  them halfway in Clermont for dinner.  We met them at Lilly's on the Lake, had a very nice dinner and visit and, much to our surprise, it was Karaoke night. All four of us all went up there throughout the evening (my first live performance in an english speaking country). It was so much fun, it was a good thing the restaurant closed at 9:00 otherwise the girls may have missed their ship the next morning.


We drove over to Clearwater on Wednesday for a quick visit with Aunt Arlene and Uncle Al; from there we stopped at the Hard Rock Casino in Tampa (no luck).  Thursday, Friday and Saturday were spent relaxing and enjoying the beautiful Florida weather. 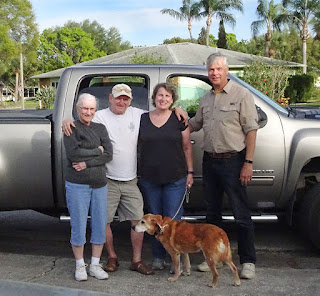 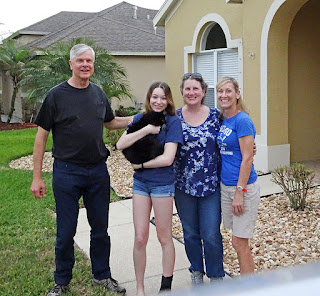 Tarpon Springs is the sponge capital of the world.  It is a town on the Gulf of Mexico and someplace  I've always wanted to see.  We took a drive over on Sunday, parked our truck and while looking for a bathroom found Craig Park.  Craig Park is a spring fed bayou and we saw lots of manatees and a few rays swimming around.  From there we walked into town searching for the sponge docks.  This is a very cool area with lots of shops and restaurants and places to sign up for boat tours.  We didn't have a lot of time to spend here because we were heading over to visit my cousin Cindy so we decided that we would come back on Tuesday and make a whole day of it.  We had a very nice visit with Cindy and her daughter, Alex.  Aunt Arlene and Uncle Al even came over to see us one more time and they brought some really good Chicago style pizza - YUM! 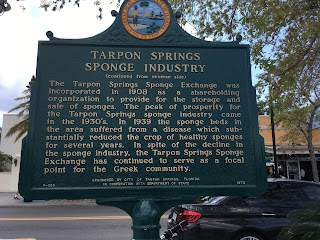 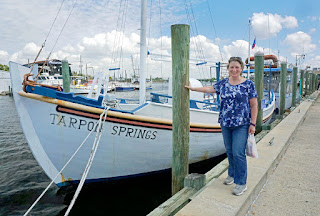 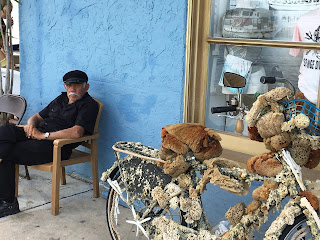 On Tuesday (3/13) we drove back to Tarpon Springs and took a sponge dive boat ride.  It was only about 40 minutes but very interesting watching the diver go down in the water wearing the 100 year old helmet and lead shoes.  He brought up a sponge and passed it around so we could all touch it.


After the boat ride we walked around the shops and, of course, bought some sponges.  Then it was on to Yianni's for a Greek lunch.  It's fun to have a total tourist day.

We left Bushnell at 9:00 AM on Thursday, March 15th and arrived in Miami at 4:30 PM - what a long day of travel.  Are you wondering why this girl who really doesn't like hot and humid weather would travel even further south into Florida?  One reason - the Cubs!  They are playing their first series of the year against the Marlins and we're going to be there.  The last time we went to an opening game on the road was 2016 and we all know what happened that year!

That's it for this post - the next one will be about our month in Miami.  So far we've really enjoyed being down here.