We drove highway 101 north through Oregon and Washington to get back to our Summer destination of Forks.  Ten days were spent touring the Oregon Coast which wasn't nearly enough - it is an amazingly beautiful area.

4/20 - 4/23, Brookings Elk Lodge
Our first stop, just north of the California border was Brookings, Oregon.  We stayed at an Elks Lodge, it was a spot in a parking lot but for $20.00 a night you just can't beat the price.  It rained a lot while we were there but we did get some nice weather and had time for some exploring.  One of the RV blogs I follow had talked a lot about Cape Blanco State Park and the lighthouse there.  This couple had worked as lighthouse hosts there for a month and we wanted to check it out.  We got there too late to get into the lighthouse but we did meet one of the current lighthouse hosts and talked to her about the job.  We also took a drive around the campground and have decided to stop here for a few nights on our way north.

On our way back to Brooking we stopped at the Crazy Norwegian in Gold Coast for dinner.  The food was good and the desserts were awesome!  We both ate too much,  really need to stop doing that.

We also drove back south into California thru Crescent City to see their lighthouse and more redwood forests.  The drive on 101 in Northern California and Southern Oregon is one of the prettiest drives we've been on.

4/24 - 4/25, Cape Blanco State Park
We usually drive at least 200 miles between stops but Cape Blanco was so beautiful that we only drove 60 miles and camped there for two nights.  Our site overlooked the ocean (through some Sitka Spruce trees) and there was a trail right behind our rig that went up to the lighthouse.  If you walked in the other direction it took you to an ocean overlook with a bench and picnic table to relax at.  We hadn't camped in "nature" for a while and this was the perfect spot to get back into it.

The lighthouse is up a hill, you can drive there until 3:00 when they lock the gate at the bottom of the hill.  With the gate closed you have to walk up the hill, Marty wanted sunset lighthouse photos so up we walked.  This lighthouse is on a point, you are surrounded by water on three sides.  Beautiful!  We even saw some deer while we were up there. 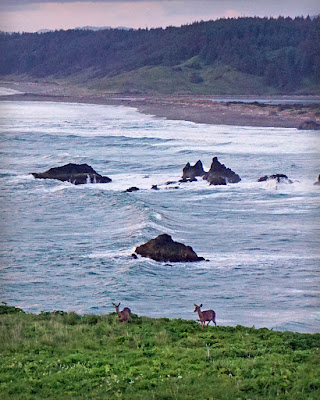 We got to tour the inside of the lighthouse the next morning.  We drove up the hill and stopped in the visitor center and found out we didn't have to pay because they take the Federal Park Pass - YAY!  That pass sure is nice to have.  We walked over the lighthouse and met the downstairs volunteer who told us some of the history of the lighthouse.  Then he sent us up the spiral staircase to the top where we met the second lighthouse volunteer, Bob.  Bob was wearing a replication of what the original lighthouse keepers wore back in the early days.  We were the only visitors to the lighthouse so we had a "personal" tour.


After leaving the lighthouse we drove down the hill and visited the Hughes House (still in the state park).  Patrick and Jane Hughes were pioneer dairy farmers with seven children. They built an eleven room, 3,000 square foot Victorian home which has been restored and is open to the public.  The house was built in 1898 and is on the National Register of Historic Place.  Being a good Irish Catholic family one of their 5 sons became a priest and they even had a chapel upstairs.  There were six bedrooms, a huge kitchen and pantry but only one bathroom (what were they thinking - one bathroom for 8 people - who does that? - Oh yeah, my family - never mind).  One of their other sons was a lighthouse keeper up the hill at Cape Blanco.  We were able to wander through every room, a volunteer walked with us through the first floor telling us the history of the house and the family.  They sent us upstairs on our own to see most of the bedrooms and the chapel.

As beautiful as Cape Blanco was and as much as we would have liked to stay a few more days it was time to continue north.  We may be back at Cape Blanco to volunteer in the lighthouse for a month (or two).

4/26 - 4/29, Tillamook Elks Lodge
The drive along the coast to Tillamook was only 225 miles.  We stayed at another Elks Lodge but this was not their usual parking lot.  It was right off 101 in a grassy field with well laid out gravel RV spots.  They even had an enclosed gazebo with a wood burning stove and a small kitchen for group gatherings.

There was quite a bit to do in this area.  We stopped in town to pick up some tourist information and set out to do some exploring. Across the street from the tourist information was the Tillamook Pioneer History Museum.  This museum is housed in an old courthouse and they had so much stuff!  We talked to the registrar and told her how we volunteer at the Forks Museum.  She seemed interested in the idea of RV volunteers; maybe some day we'll see a listing for work there.

We also drove part of a scenic loop along the ocean to visit Meares Lighthouse.  It was closed but the drive was pretty and we got to see the "octopus" tree.  We stopped at a beach with houses overlooking it - I can't imagine living in one, I'd be afraid it would slip off the hill. They sure were pretty though.  I saw a lady walking the beach with a bag picking up stuff and asked her what she was looking for.  She collects agates and gave me a couple to start me off on my own collection.
After our drive we went into Tillamook to visit the Tillamook Cheese Factory and take a self-guided tour.  The tour was interesting and the free samples of cheese and fudge were awesome.  They also had a store and gift shop. EVERY flavor of Tillamook ice cream is sold there including my new favorite - Malted Moo Shake.  Fudge and ice cream -what's not to like? 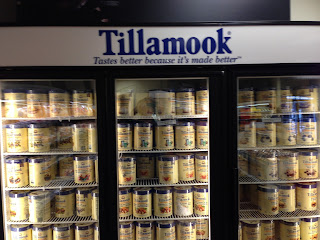 One more place we visited was the Tillamook Air Museum which is housed in a former blimp hangar, called "Hangar B".  This is the largest clear-span wooden structure in the world.  It was a very interesting museum with lots of information about the use of blimps during the war.  Sometimes when we visit museums it makes me realize how much we don't know about American history. 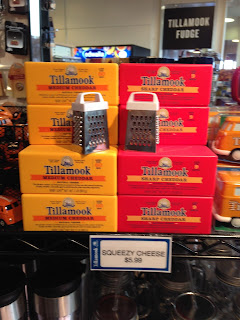 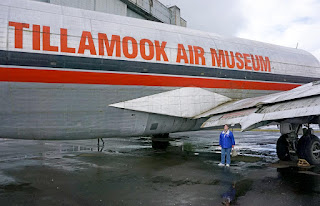 After leaving the Tillamook Air Museum we headed back to the Cheese Factory for a few more items, you can never have enough fudge or ice cream.

While in Oregon we had a light come on in the truck, looked it up in our manual and discovered that it was some kind of problem with the Def Fluid tank.  (In case you don't know what Def fluid is, it's used with diesel engines).  The closest Chevy dealer we could find was 60 miles away in Hillsboro, Oregon (right outside of Portland).  We drove over and they gave us good news and bad news.  The good news was it was an easy fix and would be covered under our warranty.  The bad news was there is a national back order on the item they needed and they couldn't get it for 3 weeks!  We needed to be in Forks in a few days so we decided to take our chances and take it to a dealer in Washington. The Oregon dealer thought we should be able to make it to Forks.  We did find out that we'd be able to drive for a while with no restrictions and then we'd be able to drive 99 miles at mph, then 99 miles at 55 mph and then it would drop down to 4  mph.  YIKES!

4/30 through ........., Forks, Washington
We made it back to Forks on Saturday, 4/30 - YAY!  Joe and Linda were there to greet us and we all went out to dinner at Forks newest restaurant - Puffin on 101.  Once again we ate too much, it's the desserts that hurt - maybe skip dinner and go right to the dessert?  It's so nice to be back for the summer, there is so much to do here and we are going to have three sets of visitors (2 sets from Chicago and 1 from California).

Once we were settled Marty called a dealer in Port Angeles to make an appointment for the truck.  We took it in on Wednesday and while driving the 60 miles there the light came on telling us we were 99 miles from our first restriction down to 65 mph.  When we got to the dealer they were able to order the part but it would take a few days to come in so we drove the 60 miles back to Forks.  Our first 10 days in Forks were spent close by, no sightseeing for us - had to conserve those miles!  The part came in and Marty successfully made it back to Port Angeles where the truck was fixed and life is good.

Our days at the Museum this year are Wednesday thru Saturday and one week off every month.  We have another work camper couple this year - Lynne and Jerry; they work Saturday thru Tuesday.  Saturday is usually the busiest day so it's good to have more than one person in the Museum.  I work in the museum and Marty works on projects and boy are there a lot of projects! Last year he refinished the axe that the logger is holding at the Logger Memorial.  He did such a good job that he was asked to do the large logger statue (stripping, sanding and staining).  He will also be painting the other "Twilight" truck.  Those aren't even museum projects - there are plenty of those too.  It will be a busy summer.

Since our truck is fixed we did get in a little bit of exploring on our days of.  We took a drive to Salt Creek Recreation Area which is a beautiful park on the Straits of Juan de Fuca.  Some of the campsites there look right out on the water.  We did a little bit of hiking and I even found some pretty seashells to add to my collection. 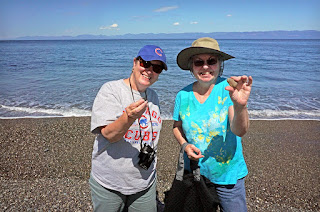 On another day we drove with Linda (our boss) up to Clallam Bay to look for sea glass and agates.  I was very happy to find some small pieces of sea glass - they're hard to spot and Linda has way more patience than I do for looking for them.

Another excursion was yesterday (5/23) when we took a ride on a Forest Service Road that is not recommended unless you have 4-wheel drive.  It was 8 miles on a very bumpy one lane road along a steep drop-off.  It ended at what used to be the Kloshe Nanitch fire lookout tower but is now a platform looking out over Lake Crescent to the west, the Olympic mountains to the east and, if you're really lucky and it's a clear day, you can see the Pacific Ocean to the south.  We didn't see the ocean (too hazy) but we did see an eagle soaring overhead which was pretty awesome! 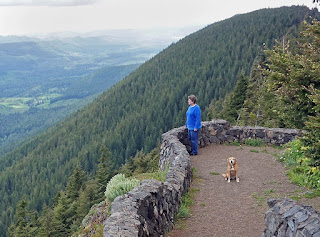 That's it for this post - all our visitors are coming in June so it should be a busy month with lots of sightseeing and photos.