We've been very busy since Labor Day.  We spent about 7 weeks in the Midwest and 10 days on a bike/barge trip in Europe.  We also had some interesting issues with our rig.  And, sadly, we had to put Maddie down - she was 16 years old and had a good life.  She really seemed to enjoy our travels.

I'm doing three posts, one for the Midwest, one regarding the rig and one for our bike trip.  This is the Midwest Portion

Traveling back to Chicago (with a slight detour)
After spending Labor Day weekend at Lithia Springs Campground on Lake Shelbyville we drove about 2 1/2 hours west to St. Louis (Dr. Edmund Babler State Park) to visit my niece Katie and her family. We had so much fun with them!  Emily is 3 1/2 and Ethan is 1 1/2 and they are super sweet kids with lots of energy.  On Wednesday (9/5) we met up with Katie at the community center for Ethan's first mom/tot's music playgroup; that was fun to watch.

On Saturday (9/8) Katie was working so we volunteered to take the kids to the "Magic House"which is an awesome children's museum in St. Louis.  Unfortunately it was a rainy Saturday and everyone else in St. Louis had the same idea so the place was packed!  We lasted about two hours (maybe) and then dropped them off with their daddy and we spent the rest of the day relaxing (recuperating) in the rig. 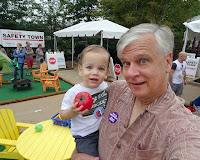 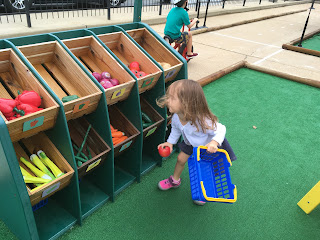 We drove by the Arch on Friday (9/7) and realized that the best place to take a picture would be from the Illinois side.  We walked around the outside of the Arch with plans to come back for the inside later.

From the Arch we drove to the International Photography Museum.  They had a baseball stadium exhibit and the museum is free on the first Friday of the month - that was a win for both of us!

Monday, we drove across the river into Illinois to East St. Louis and discovered a park with a platform for viewing the Arch.  Marty did his photography thing and then, since it was right next door, we visited the Casino Queen.  We broke even so we had a fun morning.


From East St. Louis, IL we drove back to St. Louis and actually toured the Arch.  We've been in St. Louis many times but had never been inside the Arch - it's pretty amazing.  There is a museum with exhibits about the Lewis and Clark expedition and the importance of St. Louis to the Westward Expansion.  There are also exhibits about the building of the Arch and the design competition to build it.  We wandered through the exhibits and then viewed the movie about the construction of the Arch.  The movie was very interesting.  There were no OSHA regulations back in the early-mid 1960's and watching the men walk the beams without safety harnesses was pretty scary. Amazingly no one was killed during the construction.  There were also a lot of workers smoking which is something you don't see much of anymore (thank goodness).


After the movie it was time to get into a five person pod and ride to the top.  These pods are tiny and you wouldn't want to ride up with anyone too chubby.  Once at the top they have tiny "slit" windows to look out, you can look eastward across the Mississippi River into Illinois or Westward and imagine the pioneers leaving St. Louis and traveling across the country.

On Tuesday (9/11) it was back to the Simmons house to hang out with Katie and the kids.  We had hoped to visit Grant's Farm but discovered that it's closed on Tuesdays after Labor Day.  Luckily, Grant's House was open and we caught up with a tour group and walked around and learned a little history.  There is just so much history you can learn when you're with a one and three year old so our next stop was at a park near their house.  We stopped back at their house for a little while, the kids ate lunch and went down for their naps and then we headed back to the rig to take care of Maddie. 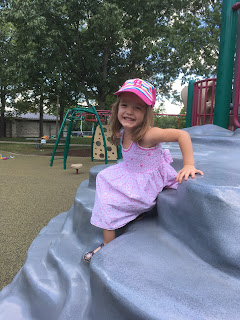 Katie and the kids came by our rig after nap time so Emily and Ethan could see our house with wheels.  They liked it but what they really liked was the nearby camp playground.  After a little bit of playtime we headed over to Dewey's Pizza to meet Paul and have some pizza - yay!  This is a fun pizza place, when you walk in there is a window into the kitchen and you get to watch them make the pizzas.  The pizza-makers love an audience and were quite entertaining - they made a dough circle, stuck peppers for the eyes and mouth and then threw it at the window where it stuck, the kids loved it!

After dinner we stopped at Dairy Queen for dessert.  I tried to take a video of Ethan when he saw the case of ice cream cakes - he was so excited, pointing and jumping around.  Very adorable, too bad I'm not any good at video taping.

We were at Katie's bright and early on Wednesday.  She had an appointment to get her boot removed (did I mention that she had a broken ankle?) and we drove Emily to preschool and went back with Katie to pick her up.  We stayed at their house until the kids went down for their naps and then it was time to say good-bye to the Simmons Family. 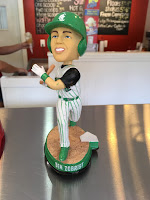 We left St. Louis Thursday morning (9/13) and headed northeast to Comlara County Park in Hudson, IL.  It's near Bloomington-Normal and is also pretty close to Peoria.  This was a very nice park!  It's on a lake and there were lots of trails.  There were lots of things to see an do in the area. We visited Eureka College and checked out their Ronald Reagan Museum.  After the museum we stopped at Uncle Bob's Ice Cream Shop and discovered that a very popular Cub player grew up in Eureka, Ben Zobrist.  There was a bobblehead of him in his Eureka HS uniform on the counter.  After some really good ice cream we drove to Peoria and discovered the Dan Fogelberg Memorial which is on a beautiful site overlooking the Illinois River. 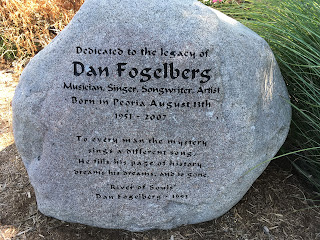 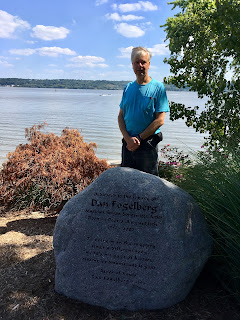 We left Comlara Campground on Monday (9/17) headed up to the Chicago area.  We spent the end of September and the last two weeks of October in the Paul Woolf Campground in Elgin. We come back in the fall hoping for a lot of October baseball.  I was hoping for a better year for the Cubs - it was exhausting watching them this year - 95 wins and yet it never felt like they'd go very far in the playoffs (and they didn't).  I went to three games the last week of the season and they lost two :(  and went on to lose the Wild card

We're always happy to be back in the Midwest.   It's great to catch up with our family and friends and  visit our favorite Midwest restaurants and it's also very nice to eat good pizza!  We get to meet any new babies (and there are always new babies in my family!).


We are leaving Elgin on 10/31 because that's the day they close for the season.  We are heading to Mesa, Arizona from here with six weeks to get there; we have reservations from 12/19 thru 3/19.  Not quite sure of our route but do know that we will be going through Kansas since that is the ONLY state west of the Mississippi River that we haven't visited.